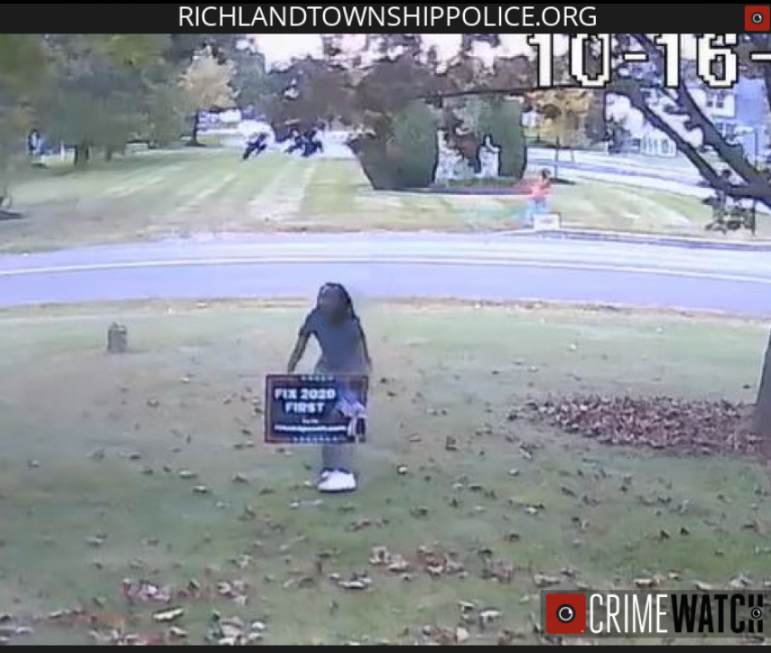 Richland Township Police are asking for help identifying the person who stole a “Fix 2020 First” political yard sign from the front lawn of a home on Mill Road. The sign popularizes a phrase used by former president Donald Trump last month.

Someone in the Quakertown area apparently had sticky fingers when they saw a political yard sign with which they disagreed, so police are asking the public to help identify them.

According to a post published by the Richland Township Police Department on their Crimewatch site on Wednesday, an unidentified individual stole a sign that said “FIX 2020 FIRST” from the front yard of a residence on Mill Road on the afternoon of Saturday, Oct. 16, around 3 p.m.

The phrase is a quote by former president Donald Trump, who in early September “transmitted the three-word, all-caps statement…through the mailing list for his ‘Save America’ Political Action Committee,” MSN.com reported.

“The message doesn’t clarify what, exactly, should be fixed about a notoriously hated year, or who should do the fixing, or what should be set aside while the fixing is done,” the website Mediaite–which broke the story–noted of Trump’s brief statement.

“While the statement didn’t clarify what exactly needs to be fixed, the rhetoric seems to fall in line with Trump’s accusations that current-President Joe Biden stole the 2020 presidential election from him during his bid for re-election,” the MSN story indicated.

Political yard signs are often stolen from private property in the days and weeks preceding an election, but this case is a bit unusual in that regard, because the sign that was taken isn’t in support of someone who will even be on the ballot next week.

Richland Township Police may be contacted via the Tips form on their Crimewatch site.