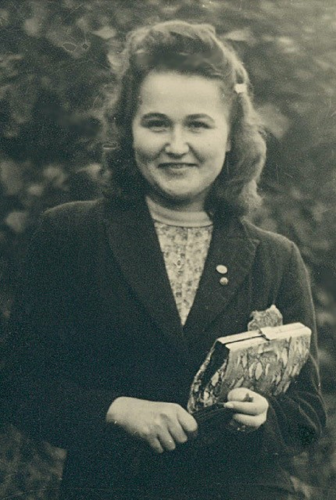 Born April 19, 1925 in Krelkau, Germany (now Poland), she was the daughter of Richard and Hedwig Franke and had six brothers and sisters, all of whom predeceased her. Anneliese was married for 70 years to the late Walter Zeitler, who died in 2016. Anneliese had a complex life that saw her caught up in the events of World War II. She survived the Dresden firebombing and when the war ended, she and her family were refugees from Silesia. She met Walter in the Eastern Zone while on a blind date, and after he escaped to West Germany, before the borders were sealed, he was able to bring Anneliese to live with him and his family. In 1952, Walter and Anneliese emigrated to the U.S., arriving in New York to start their new lives $800 in debt. Naturalized as American citizens in 1957, they moved to Norwalk, Conn., where they spent nearly 30 years before relocating to Nazareth, Pa. As is true for most immigrants, the courageous move to the U.S. was challenging for Anneliese. She left family behind at a time when there was no internet, flights were expensive and even phone calls were hard. Learning from her own ongoing struggles to adjust, she was sympathetic to the difficulties of others: she was welcoming, caring and kind-hearted. Quick to laugh and easy to love, she greeted friends, family and staff where she lived with a bright smile and words of encouragement. Throughout her life, Anneliese always tried to be upbeat and, as she always said, “to make the best of it.” We could all learn from that. She will be missed.

Anneliese is survived by her son: Peter Zeitler and his wife Lynne Hoxie, both of Bethlehem; her grandsons: Hart Zeitler of New York, N.Y., and Christopher Zeitler of Champaign, Ill.

The family’s memorial observance will be a private service.

In lieu of flowers, you can remember Anneliese and her kind heart by making a contribution to St. Luke’s Hospice.