“The prediction has been made. Enjoy your six more weeks of glorious winter weather!”

Those were the words proclaimed by an official just past daybreak Wednesday at Gobbler’s Knob in Punxsutawney Borough, Jefferson County, after Punxsutawney Phil saw his shadow, predicting six more weeks of winter. 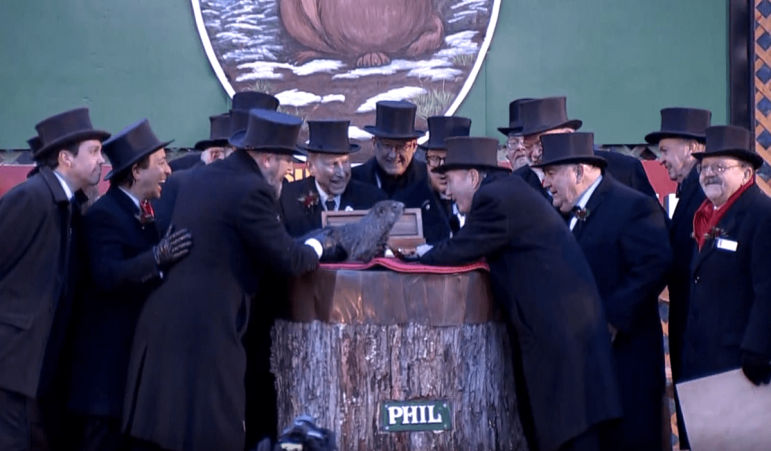 The members of the Punxsutawney Groundhog Club Inner Circle interpret Phil’s prediction atop Gobbler’s Knob Wednesday. Punxsutawney Phil did not see his shadow, which means we can expect six more weeks of winter, according to legend.

Each Feb. 2, thousands of visitors and locals travel to Punxsutawney for the 136-year-old Groundhog Day tradition.

“Today our weather prognosticating groundhog sent a clear message–winter is here to stay for six more weeks,” Gov. Tom Wolf said in a statement. “Each year on Feb. 2, people from around the world turn to our beloved Punxsutawney for the official word from Phil and get to revel in the magic of the day.”

The annual event dates back to 1887, when a group of groundhog hunters first dubbed themselves “The Punxsutawney Groundhog Club” and proclaimed Punxsutawney Phil to be the one and only weather-prognosticating groundhog. Since then, thousands of visitors have gathered each Feb. 2 to watch the groundhog emerge from his lair.

According to Pennsylvania Dutch folklore, if the groundhog sees his shadow there will be six more weeks of winter weather. If he doesn’t, Phil promises an early spring.

“Each year, we are honored to introduce the world to Punxsutawney Phil,” said Groundhog Club Inner Circle President Jeff Lundy. “The time-honored Pennsylvania tradition gives us an opportunity to show how proud we are of Punxsutawney, while also inviting visitors and spectators from around the world to join in spreading joy, no matter what the weather might hold.”

Visitors who travel to Jefferson County to see Punxsutawney Phil jokingly called the journey a “Philgrimage.”

The annual event has become well-known far beyond Pennsylvania in part due to the success of the 1993 blockbuster film Groundhog Day, which stars Bill Murray as an unhappy Pittsburgh weatherman whose life changes for the better after he becomes trapped in a time loop on Feb. 2 in Punxsutawney.