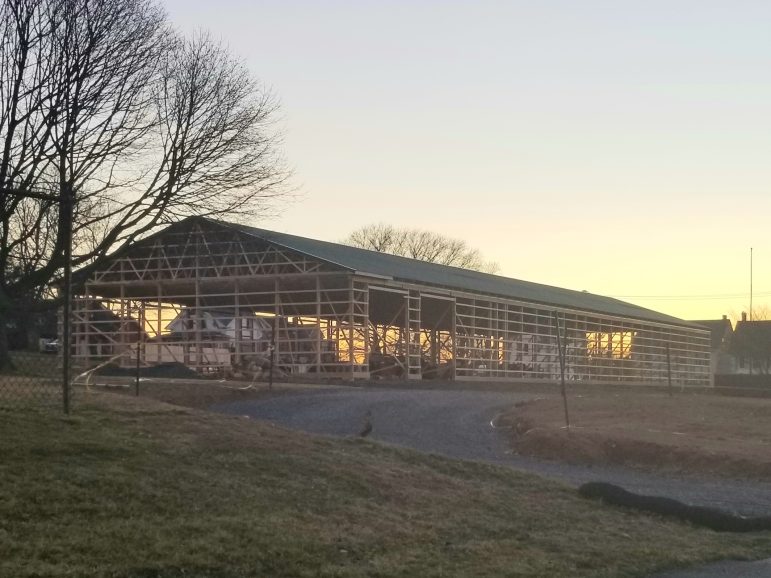 The building under construction on the site of the former Reinhard School in Hellertown will house the borough’s Public Works Department once it is completed. The Reinhard School was torn down about a decade ago, and the land on which it sat has been vacant ever since. Formerly owned by the Saucon Valley School District, the property was sold to the borough for a nominal sum decades ago with a deed restriction that required that any redevelopment of it be for municipal purposes.

Anyone who’s driven down Northampton Street, Magnolia Road, Rentzheimer Drive or Saucon Street in Hellertown recently has probably noticed the building that is taking shape on the site of the former Reinhard School, which for years has been a vacant lot.

What is currently under construction there is a maintenance building for the Hellertown borough public works department, ground for which was broken last September.

Discussions about the proposed building began in 2018, when concerns were expressed by some residents of the neighborhood about its potential impact on their quality of life.

Council members held several meetings during which the availability of alternative sites was discussed, but ultimately determined that the use of another site would likely be cost prohibitive, due to the fact that taxable land would probably have to be purchased.

The borough received some grant money to help cover the cost of the building, which will house many of the public works department’s equipment and free up the building that it currently utilizes. Known as “the Stables,” the garage-like structure next to Borough Hall will be turned over to the Hellertown Police Department, which currently has no covered parking for its vehicles.

>>VALUE OUR REPORTING? HELP SUPPORT IT BY BECOMING A SAUCON SOURCE MEMBER TODAY.

An estimated completion date for the public works building has not yet been announced.

Only the western portion of the property that was once owned by the Saucon Valley School District is being redeveloped. The ballfield at the east end will remain there.

Updated plans for a new public works building in Hellertown were presented at a borough planning commission meeting in August 2021. The revised plans reflected changes made in response to concerns from members of the community, planners were told. The plans were ultimately approved and ground for the project was broken in September. (FILE PHOTO)