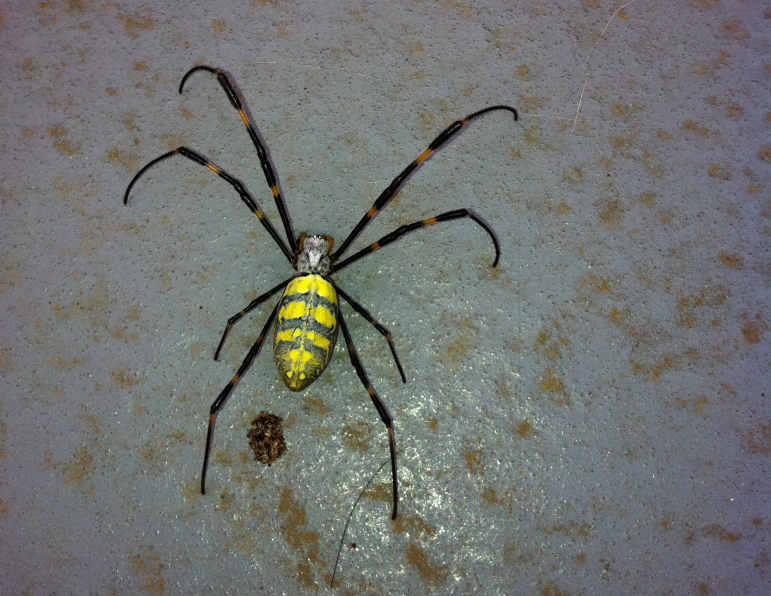 A female jorō (Nephilia clavata) spider photographed in November 2010 in Ibaraki, Japan. The spiders were introduced from the Far East to Georgia in the southeastern U.S. in 2014, and are continuing to colonize more territory annually.

By now, you’ve likely read some breathless headlines about the threat of invasive jorō spiders raining down over the East Coast this summer.

A regional online local news network recently ran a story under the headline “Invasion Of 3-Inch Spider Likely To Parachute Along East Coast” and Axios posted one that screamed “Giant Spiders Expected to Drop from Sky Across the East Coast This Spring.”

At least in Pennsylvania, however, there’s no clear indication that jorō–or any–spiders will be pouring from the skies like rain during a summer thunderstorm.

The bright yellow jorō spiders that can grow up to three inches in diameter are an invasive pest from Asia and were likely introduced to North America as stowaways on shipping containers over the past decade or so, with the first confirmed discoveries happening in Georgia in 2014. In the years since, the spiders have spread to other Southern states, including Alabama, North Carolina, South Carolina and Tennessee.

The intense media coverage of the jorō spider is at least partly based on a recent paper published by University of Georgia researchers Andrew Davis and Benjamin Frick.

In it, the researchers noted there is “no way of knowing if and how far the jorō spider range will expand,” and said the spider could spread beyond the southeastern U.S.

“In their native Japan, Joro spiders colonize most of the country. Japan has a very similar climate to the U.S. and is approximately the same latitude,” the University of Georgia noted in a press release.

A fact sheet this week from the Penn State Extension notes that jorō spiders have a shorter life cycle and can live in colder temperatures than related species.

“Between 2014 and 2022, jorō spiders spread outward in all directions from the location they were initially found (in Georgia) by 50 to 80 miles, or about 10 miles per year. At that rate, they may reach southeastern Pennsylvania in 35 years and northwestern Pennsylvania in 60 years. However, spiderlings are capable of moving tens to hundreds of miles via ballooning (see Life history below), so a storm blowing in the right direction at the right time of year may move them in large jumps. Additionally, as they increase in numbers, the risk of human-mediated transport to new areas also increases,” the Penn State Extension fact sheet states.

Experts said the “immediate risk of jorō spiders appearing in Pennsylvania is relatively small, but will increase year over year as they spread naturally.”

The potential impact of jorō spiders on the environment and native species is not yet known, but they are presently considered a nuisance pest.

Jorō spiders do have small fangs, but they are often too small to break human skin. In addition, the spiders are not aggressive and their venom is weak to humans.

“Despite sensationalist reports, they are harmless to people as they are reluctant to bite and, if bites do occur, the venom is weak and not medically important,” experts said.

The Penn State Extension fact sheet noted that golden silk orb-weavers are similar and are rarely found in Pennsylvania. However, climate change is expanding their range.

Some garden spiders commonly found in the Keystone State may look similar to jorō spiders and some may confuse them with the new arachnids on the block.

Based on the information on the spider from experts, don’t cancel your backyard picnics due to worry over jorō spiders.