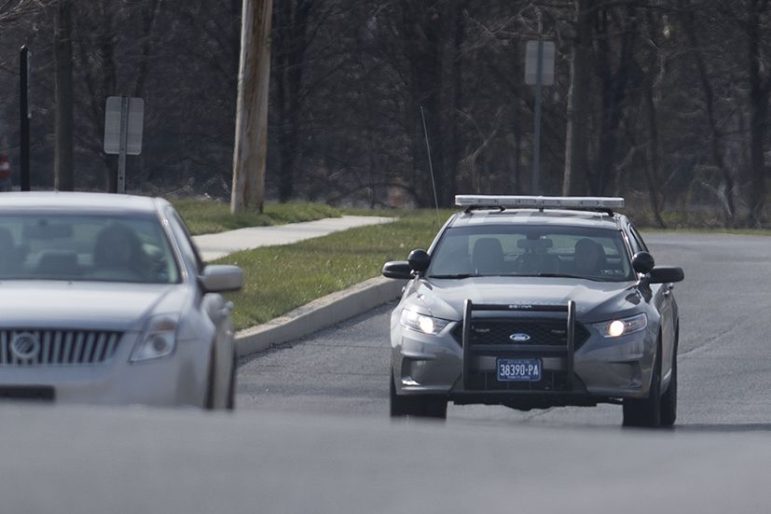 Pennsylvania State Police troopers must report the gender, age, race or ethnicity, and ZIP code of the people they pull over, as well as whether the person exhibited “compliant or resistant behavior.”

Pennsylvania State Police will not release an analysis on the racial breakdown of traffic stops this year–the first time new information could have been available in more than a decade–after researchers found problems with the data.

State Police announced in 2021 that they would partner with the University of Cincinnati Center for Police Research and Policy to conduct independent analysis of traffic stop data following a Spotlight PA investigation that found the department stopped collecting the information without explanation or public notice in 2012.

The center was slated to produce its first new report by April 2022, the department said in a press release. However, the researchers ran into problems with “data reliability and validation,” which have been corrected, according to State Police spokesperson Lt. Adam Reed.

Reed would not further explain those problems, but said they will be outlined in an upcoming report. State Police will also publish an examination of data collected during the first quarter of 2022, Reed said.

Asked if the department had a timeline for finalizing those reports, Reed said only: “No.”

This is the second time State Police have partnered with the University of Cincinnati to examine traffic stop data for evidence of racial bias. Officials initially told Spotlight PA they stopped collecting the data because the analysis, which spanned the years 2002 to 2010, consistently showed state troopers did not demonstrate racial bias in the types of people they pulled over.

While Spotlight PA’s review confirmed that researchers did not find evidence that state troopers stopped Black and Hispanic people at a disproportionate rate, the analysts did find that once pulled over, troopers subjected people of color to citations, arrests and searches more often than white people.

And despite initiating fewer searches of white drivers, the researchers noted police more often found contraband in their cars than in the cars of Black and Hispanic drivers.

When Spotlight PA contacted her earlier this month, Robin Engel, a professor of criminal justice at the University of Cincinnati and director of the Center for Police Research and Policy, directed questions about her work with Pennsylvania State Police to the agency’s communications department. A subsequent email requesting an interview with Engel about her previous and current research went unanswered.

A work agreement between the University of Cincinnati and State Police bars the researchers from sharing findings “directly to the media without approval from PSP officials.”

In her 2020 proposal to State Police, Engel said her team would look at the data troopers collected after traffic stops for any evidence of “potentially problematic areas.” If they found racial disparities, her team would provide recommendations to reduce them.

The researchers and State Police developed a form for troopers to complete after each traffic stop that gathers information in four categories: circumstances surrounding the stop, such as time of day, location and reasons for the stop; demographics of the driver; outcome of the stop; and trooper-identifying information, such as assigned station and demographics.

Troopers must report the gender, age, race or ethnicity, and ZIP code of the people they pull over, as well as whether the person exhibited “compliant or resistant behavior.”

But as troopers collected data throughout 2021, the researchers identified new information that would be helpful to collect and updated the form. (Reed would not clarify what fields were added, but said the forthcoming report will include this information.)

Troopers are instructed to use their perception of a person’s race or ethnicity when recording that data, Reed said, because the information is not included on a driver’s license.

“In accordance with recommendations from the University of Cincinnati Research Institute, the Department is not advising Troopers to ask occupants about their race and/or ethnicity,” he wrote.

Recording race based on observation can be useful for understanding the bias that stems from an officer’s own perception, said Witold Walczak, legal director of the ACLU of Pennsylvania.

“If you’re trying to get at racial profiling, we want to know what the person appears to look like to the observer,” Walczak said.

Relying on an officer’s perception of race “makes a lot of sense,” Phillips said, when the goal is to analyze how that perception affects policing outcomes.

The ACLU of Pennsylvania sued State Police in 2019 on behalf of 10 Latino drivers who reported being pulled over by troopers who questioned their immigration status and detained them for hours, despite having no request to do so from federal immigration authorities.

State Police settled the suit for $865,000 this April and agreed to collect information about officers’ interactions with people from other countries during traffic stops. The agency also agreed to revise its policies to clarify that troopers are not responsible for enforcing federal immigration law.

Following the settlement, State Police added new fields to the traffic stop form that will provide the University of Cincinnati researchers with additional data.

Troopers now must record whether the stopped driver is not a United States citizen. They also are required to report whether they used language assistance during the stop and whether they called a supervisor, the department communications desk or federal immigration enforcement.

Reed said State Police have designed the form to minimize inaccurate or incomplete data entry. To further prevent errors, the police and researchers are developing an auditing system that will compare the traffic stop forms with warnings, citations and dispatch records that contain similar information.

State Police’s updated agreement with the University of Cincinnati research center goes through 2025, with plans for researchers to provide yearly reports to the department on their findings. The four-year contract will cost State Police $696,000, including $174,000 already paid out for work completed in 2021.