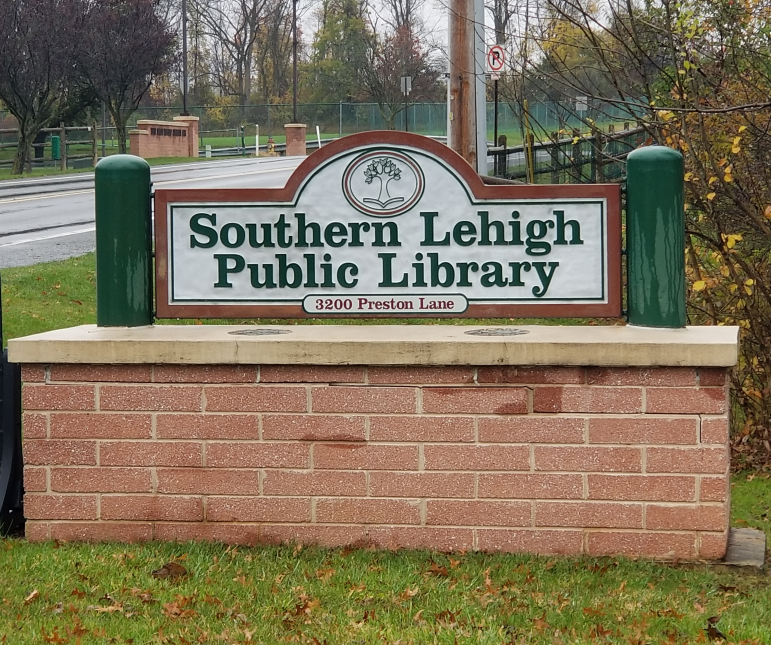 The Southern Lehigh Public Library is located at 3200 Preston Lane in Center Valley. The library receives financial support from the three municipalities that make up the Southern Lehigh School District–Upper Saucon Township, Coopersburg borough and Lower Milford Township–along with the district. Last year, it agreed to study adding Lower Saucon Township to its service area after the township walked away from a new agreement with Hellertown Area Library. (FILE PHOTO)

For those who don’t regularly rely on library services it may not seem like a big deal, but for the residents of Lower Saucon Township who were dedicated Hellertown Area Library cardholders, the news Thursday that Southern Lehigh Public Library will continue to provide them with services and programs–at least for now–no doubt came as a relief.

The announcement was made in a Jan. 4 letter from SLPL board solicitor Joseph F. Leeson III to Linc Treadwell, who is the solicitor for Lower Saucon Township Council.

It specified that the offer to continue serving residents does not extend to residents without Hellertown Area Library cards and that it was being made “in order to assist Lower Saucon Township with transitioning to being an unserved area, pursuant to Pennsylvania’s Office of Commonwealth Libraries’ approval to remove Lower Saucon Township from Hellertown library’s service area for 2023.”

The letter said that the extension is “until further decisions can be made by the Southern Lehigh Public Library’s board of directors at its Board meeting scheduled for Jan. 17, 2023.”

Even before Lower Saucon Township was officially removed from the Hellertown library’s service area on Jan. 1, township residents who supported the library were agitating for answers from council, whose actions many believe resulted in the removal.

The dispute over library services led to a falling out between township and Hellertown borough officials which has had other consequences, such as a lawsuit filed Wednesday.

Last week, the township announced that it will reimburse residents up to $40 for library cards purchased at other institutions, however officials so far have refused to identify publicly the names of institutions that are selling cards to Lower Saucon residents.

At a meeting Tuesday, councilwoman Priscilla deLeon–who continues to advocate for renewing a relationship with the Hellertown Area Library–criticized the other members of council for a resolution they passed that retroactively approved work related to library service matters that was performed by a legal firm on the township’s behalf in 2022.

It was recently revealed that as of Nov. 30, 2022, the township had spent nearly $63,000 on legal fees related to the library services dispute; money which frustrated residents have said could have been used to fund a new agreement with the Hellertown library.

In the version of the five-year agreement council voted 4-1 to reject in lieu of making a one-time $50,000 donation, HAL sought approximately $100,000 in annual funding.