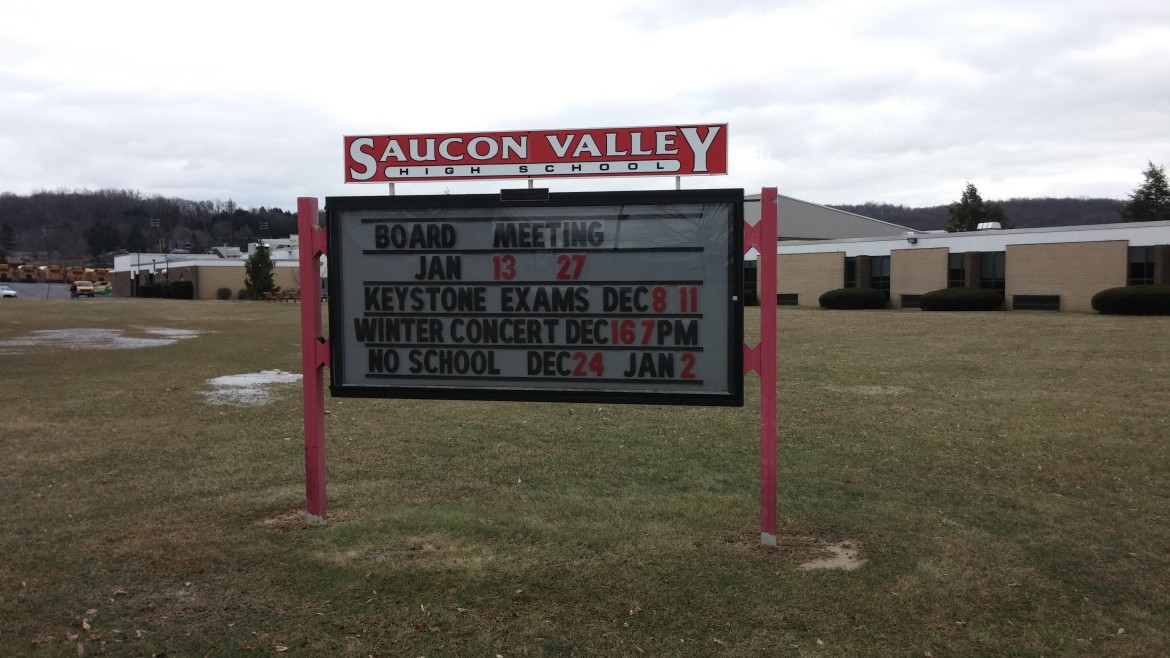 At a meeting Tuesday, the Saucon Valley School Board decided to form an ad hoc committee to help analyze and prioritize recommendations for facilities upgrades within the school district.

The decision followed a discussion about the upgrades, and why they may be needed.

In some cases, the educational value of the district’s facilities has diminished due to their age.

For example, the TV studio–which is heavily used by students–is equipped with antiquated technology that would no longer be encountered in a real world television production environment, superintendent Monica McHale-Small said.

In other cases the upgrades are being recommended because they will help bring the district into compliance with Pennsylvania Department of Education standards.

For example, enlarging the the high school special ed rooms will accomplish that.

“We do have an increasing number of students with special needs,” McHale-Small pointed out.

She added that more space will allow the district to serve students who currently receive their education elsewhere, which could result in savings in the long run.

Lastly, she said the upgrades will help support technology in the schools, including the district’s expanding iPad initiative.

Still, several board members questioned the list of proposed upgrades.

“At one time, we confiscated land across the street, because we had this huge explosion of student population which turned out to be a fantasy,” Ed Inghrim said.

Board member Charles Bartolet, meanwhile, said he could not vote to spend money on any of the proposed projects until he goes on a tour of the current facilities.

“We’re all stewards of the taxpayers’ money,” he said. “I would like to see before we spend money what it’s going to be spent on.”

In particular, Bartolet zeroed in on a proposal to purchase a new truck to transport high school band members’ instruments to athletic and other events, questioning how many times each year the truck would be used and whether it wouldn’t be more cost effective to continue renting a truck, which is what principal Eric Kahler said has been done since the old truck is “no longer road-worthy.”

Kahler said the truck rentals cost about $3,000 a year.

It’s a “very excellent band. I’m not against the band,” Bartolet added.

Board president Mike Karabin said the list of proposed facilities upgrades is a bit “cumbersome” as it was presented, and suggested that the board listen to a presentation by someone who is capable of breaking it down to best suit their needs.

Karabin suggested someone he knows at Stone House Group, a Bethlehem firm that “facilitates responsible planning and management of energy, natural and financial resources” and “provides consulting services dedicated to building stewardship for academic, not-for-profit and professional clients,” according to its website.

Board members agreed to hear a presentation from Stone House Group, and Karabin said representatives from the firm may meet with administration officials prior to it.

The ad hoc facilities committee that was formed will include board members Jack Dowling, Susan Baxter, Sandra Miller and Bryan Eichfeld.

Bartolet initially expressed interest in serving on the committee, but withdrew after the board’s solicitor advised that committees of five or more members may need to be advertised in advance, in accordance with the state’s sunshine law.

Eichfeld said he has no problem with making the committee meetings public, and advertising them if necessary.

A date for the first ad hoc facilities committee meeting was not set at the meeting.