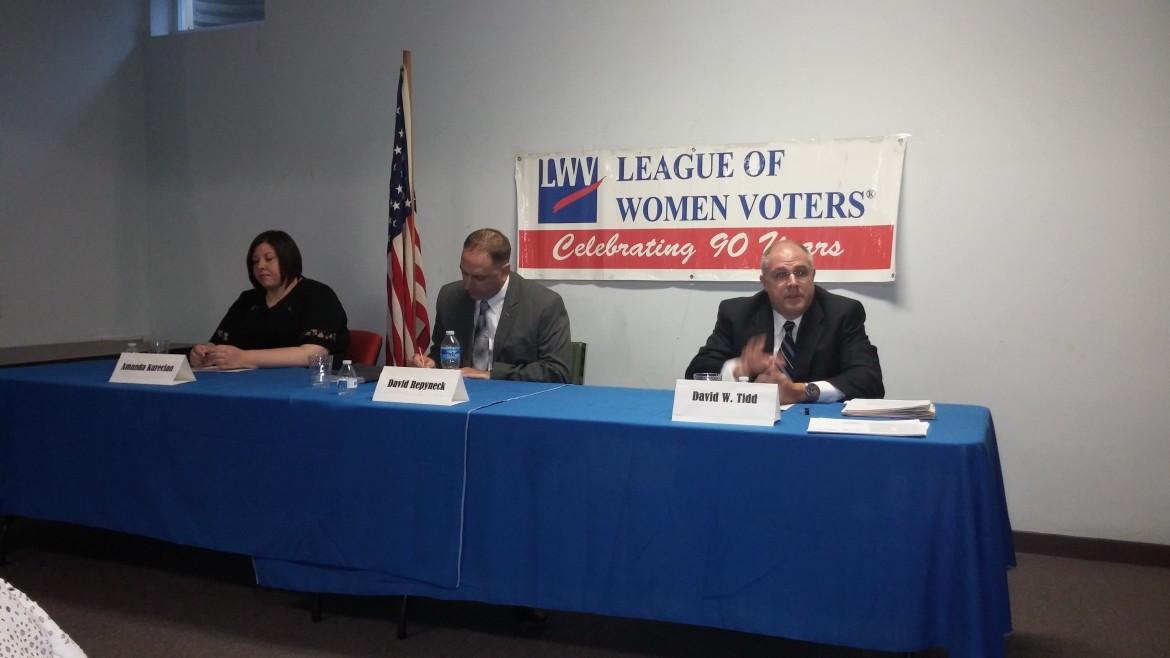 The three candidates for district judge for Hellertown and Lower Saucon Township met for an hour-long public forum sponsored by the Northampton County League of Women Voters at the Hellertown Area Library Tuesday night, and responded to audience questions about everything from their experience to their views on medical marijuana. 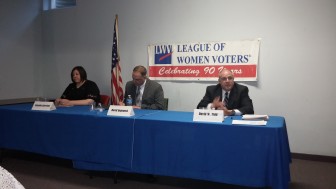 District judge candidates Amanda Kurecian, David Repyneck and incumbent David W. Tidd address questions at a public forum at the Hellertown Area Library Tuesday. All three are cross-filed and will appear on both the Democratic and Republican ballots in the primary election on Tuesday, May 19.

Incumbent district judge David W. Tidd, attorney Amanda Kurecian and retired Army major David Repyneck all stressed their ties to the community and their qualifications for the position, which comes with a six-year term.

Tidd, a Hellertown resident, highlighted his background as a lawyer and the “enormous” amount of experience he’s gained as a sitting magistrate over the last five years.

When asked why a lawyer would want to become a magistrate, he said he has found that it’s provided him with “another perspective” on the law.

Kurecian, who lives in Lower Saucon Township, said more than half the district judges in the Lehigh Valley are lawyers and called her professional background “an advantage.”

Repyneck, who lives in Lower Saucon Township, said the fact that he isn’t a lawyer shouldn’t dissuade anyone from voting for him.

“I think a—and I’ll use the term layperson—can do a better job,” he said. “If you’re a practicing attorney and a district magistrate, I don’t think you can serve adequately.”

Tidd maintains a legal practice in addition to holding the magisterial seat, and he said he is able to do that because it’s not only permitted by the state, but also encouraged.

“The state wants to encourage attorneys to sit in this position, and one way to do that is to at least allow them to have a semblance of a private practice,” he said.

Kurecian promised that she will close her Allentown practice if elected to the position.

She also said she would volunteer her time by offering pro bono legal services to needy clients, such as elderly local residents in need of wills.

Although it’s technically not a full-time job, Kurecian said that if elected she plans to work from approximately 8 a.m. to 4:30 p.m. weekdays, and would also advocate for the establishment of a night court for litigants who work during the day.

“It would be nice to get more attorneys involved in the pro bono requirement,” she added.

Tidd said he would like to see more security added to the district courts, to help better screen for firearms and improve the safety of everyone who uses the courts. He also advocated for an overhaul of the payment system that would enable people to pay fines with credit cards.

Currently, all payments must be made with cash or check, and that is “an extreme inconvenience to the public,” he said.

Repyneck said he agrees that security should be tightened at district courts, and that he supports expanded access via extended hours.

“I would like to see magisterial positions become full-time positions,” he added.

Repyneck cited his military experience, his decade spent working as a Lehigh County adult probation officer and his strong ties to the Saucon Valley area as reasons why voters should support him.

In the military he was required to deal with stressful situations “that none of these candidates can possibly comprehend,” he said, prompting Tidd to quip that he should “sit for the bar exam.”

Repyneck said he isn’t ill at ease about the fact that he still needs to pass a state-mandated certification test for laypeople who want to become district judges. He is scheduled to take the course in June.

Laypeople who are elected district judge have two opportunities to pass the test, and if they fail twice a special election must be held to replace them, Kurecian said.

In response to criticism that he is running on a family name, Repyneck noted that his cousin, Dianne Repyneck, is a former district magistrate for Hellertown and Lower Saucon Township (from 1986 to 2009), and said he’s proud to be associated with his family members’ accomplishments and public service.

Tidd noted that although he is not a Saucon Valley native, having lived in the area since 2002, he is a resident by choice.

The Saucon Valley is where he met his wife and is raising his children, and that “means something,” he told the audience of about 50 people at the library.

Kurecian, who has lived in the Saucon Valley since 1989, said she volunteers for a dog rescue group and also coaches a Lehigh Valley-wide children’s volleyball team. She also noted that she’s pro-life; a subject she said has been raised when she’s visited households while campaigning.

Repyneck highlighted his membership at St. Theresa of the Child Jesus Catholic church in Hellertown and his membership in the Hellertown Sportsmen’s Association, as well as his support for the Second Amendment as being important.

Tidd said his service as a board member at the Saucon Valley Community Center, his support for Relay for Life of Saucon Valley and his law firm’s free legal aid to local residents–which he said amounts to about $25,000 in pro bono work a year–are areas of service voters should know about.

In response to the medical marijuana question, both Tidd and Kurecian said the rules of judicial conduct prevented them from offering an opinion on the matter.

Repyneck said that when it comes to marijuana, judges should follow the law and “do what’s required.”

More information about the three candidates is available online.

Tidd, Kurecian and Repyneck all have campaign Facebook pages and websites: