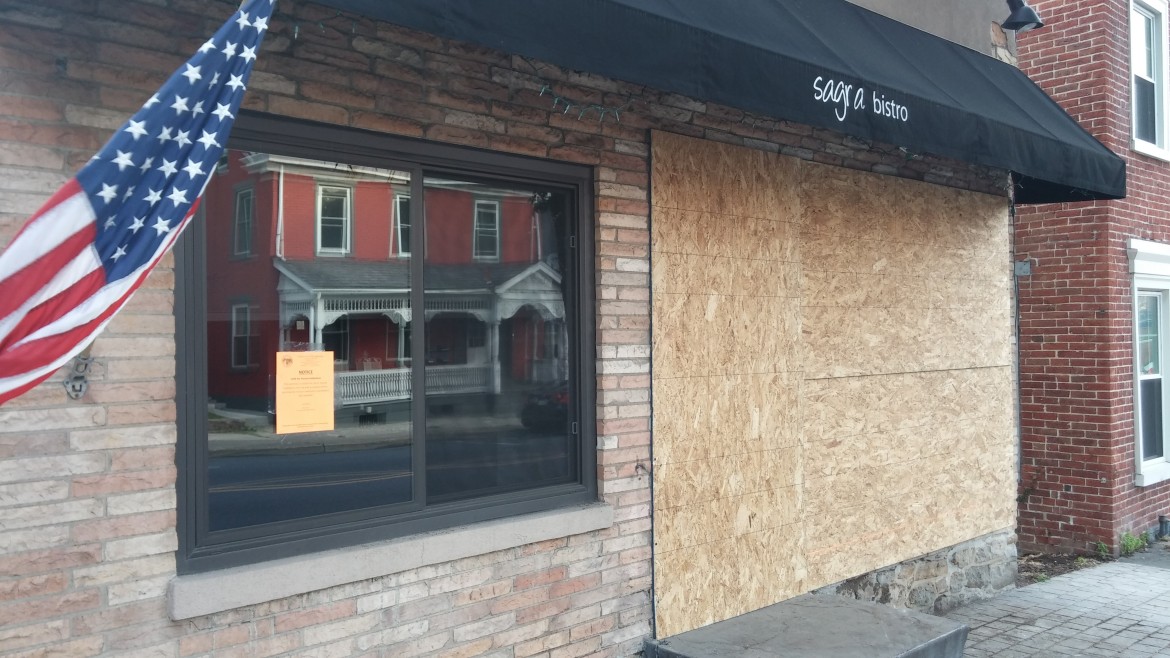 A popular Hellertown restaurant that was 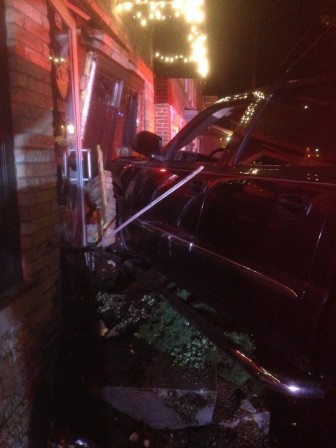 Jim Zebert arrived at Sagra Bistro in the early evening hours to survey the damage.

Inside, shards of broken glass from a shattered window still littered the floor near a front wall that was pushed in several feet by the impact. A temporary support beam installed by fire department volunteers was conspicuous near the front door, and yellow caution tape was spread across part of the darkened dining room.

Authorities have not yet identified the driver of the truck or said what caused him to careen off Main Street and strike a parked car before plowing into Sagra, which was closed at the time.

Several individuals have posted on Saucon Source’s Facebook page that the man who was reportedly behind the wheel of the pickup suffered a seizure. Eyewitnesses reported that a woman who was a passenger in the truck was taken away from the accident scene in an ambulance. 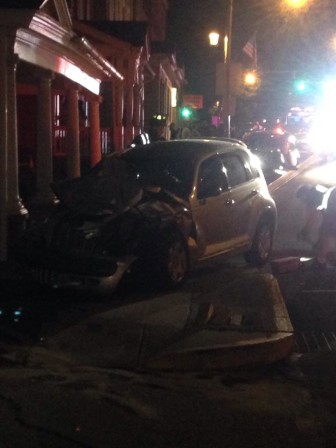 A PT Cruiser owned by Roy “Butch” Graser that was parked on Main Street in front of Sagra Bistro was propelled north after it was struck by the pickup truck that crashed into the Hellertown eatery Saturday.

The impact from the pickup striking Roy “Butch” Graser’s parked PT Cruiser propelled it dozens of yards north on Main Street to a resting spot on the sidewalk near Cafe Erica.

Graser, who was sitting outside his apartment next to the restaurant Sunday evening, said he expects to find out Monday that his car is totaled. He marveled at the fact that he had returned home from an auction just 20 minutes before the crash, and planned to leave again after getting something to eat.

On his way home from the Macungie auction, Graser said he noticed the black scorch marks on the I-78 overpass in Upper Saucon Township where a tractor-trailer crashed just a week ago, killing its two occupants. He called the fact that he observed and thought about that fatal accident shortly before his own close call possibly “an omen.”

In spite of the damage, Zebert said he hopes to reopen the bistro within a matter of weeks, but he conceded that it could take months. Engineers will be surveying the building in the coming days to ensure that it remains structurally sound, he said. 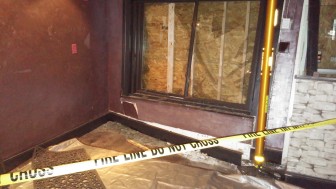 Sagra was supposed to have hosted a christening party for 60 people Sunday, but that had to be canceled. The guests who had booked the party were understanding, Zebert said, and he–like Graser–remarked that the outcome of the crash could have been much worse.

The restaurant closed at 10 p.m. Saturday night, but had it been occupied at the time of the accident there’s a high likelihood that people would have been in the pickup’s path–especially, Zebert said, since the table by the front window that was struck is a popular place for people to sit.

Zebert said he was happy with the cleanup that had already taken place both inside and outside the restaurant, and he said the crew from Butz had done “a good job” securing the building by covering the hole in its front wall with plywood.

Several people in Facebook posts Sunday made deadpan comments about the restaurant now offering “drive-thru service,” but joking aside, the hard work of repairing damage and reopening the business clearly remains, and many loyal customers have expressed their support for Sagra Bistro on its Facebook page.

A post Sunday evening announced that the bistro will continue to cater offsite while its dining room remains dark.

“During this time if you have not signed up for our email newsletter please do so to keep up-to-date. Also write a review on Google, Yelp or TripAdvisor and share your experience,” it said. “Look forward to a New Sagra Bistro soon.”

Sagra is co-owned by Robyn Cavallaro. 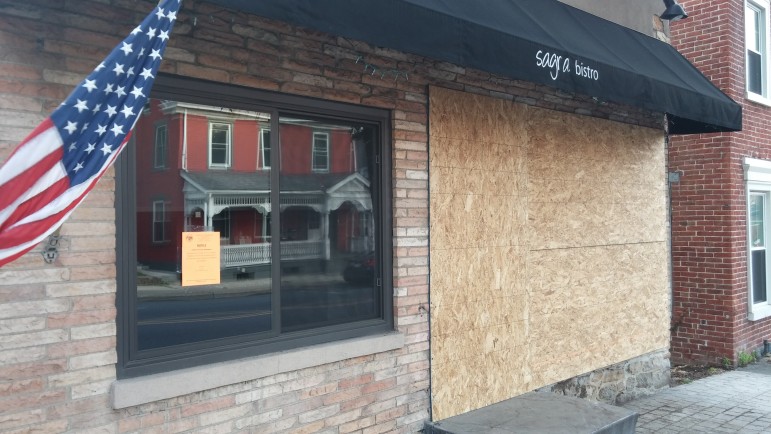 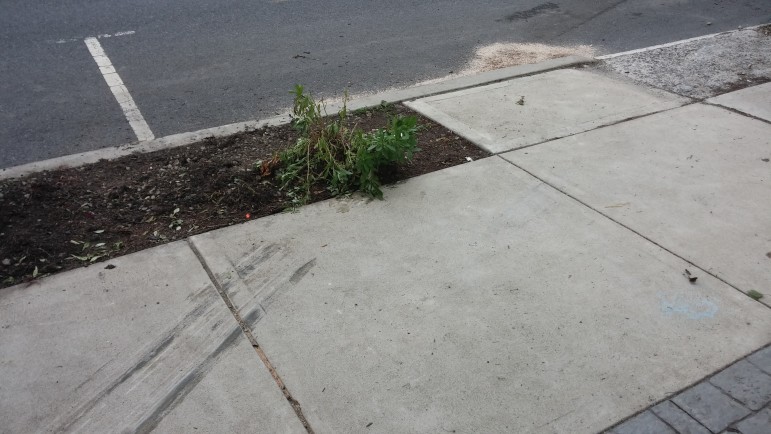 Tire marks across the sidewalk in front of Sagra Bistro, 620 Main St., Hellertown, indicate the path taken by the pickup truck that crashed through the restaurant’s front wall Saturday night. 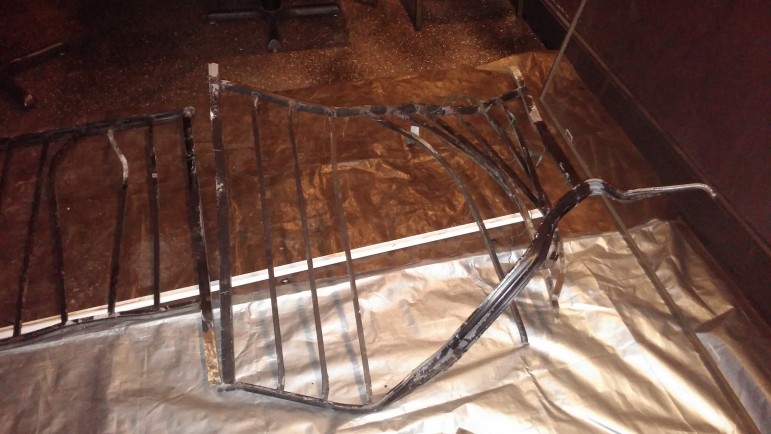 A metal railing that was part of the front steps to Sagra Bistro was bent by the impact of the crash. 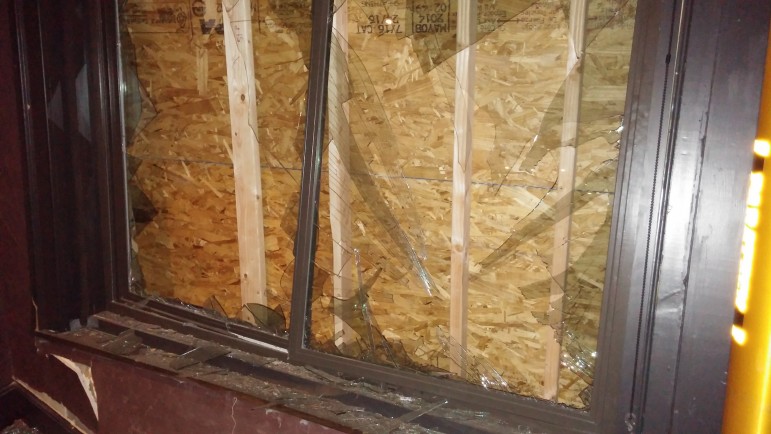 One of Sagra Bistro’s two front windows was shattered when a pickup truck struck the restaurant Saturday night.