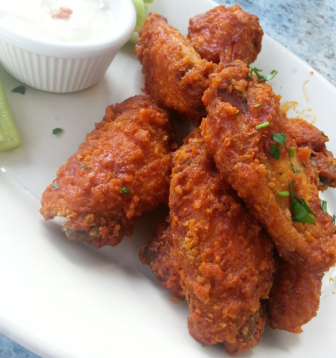 Juicy buffalo wings are one of the most popular foods in America, hands down. And with football season right around the corner, pubs, sports bars and restaurants all over the country are preparing to serve up heaping helpings of wings in all flavors and degrees of spiciness to hungry fans, many of whom will invariably wash ’em down with ice cold beer.

The Lehigh Valley has no shortage of establishments with wings on the menu, and wing devotees tend to be fiercely opinionted about where they go for their  “wing fix.”

Saucon Source wants to know where you head first for wings, and why.

Do you like your wings extra hot? Extra crispy? Smothered in barbecue sauce? Flintstones-sized? Boneless? Served with bleu cheese dressing on the side? There are so many variables when it comes to personal preferences for wings that many restaurateurs have expanded their menu offerings to help keep customers happy.

Please vote in the poll below, which includes a representative sampling of 50 well-known wing-serving eateries and bars in the Lehigh Valley (listed in no particular order).

If your favorite wing spot isn’t listed (for example, if it is a local food truck, caterer or private social club) please cast an “other” vote and post a comment about it, here or on Facebook.

WHO HAS THE BEST WINGS? (POLL)

Who has the best wings in the Lehigh Valley area?