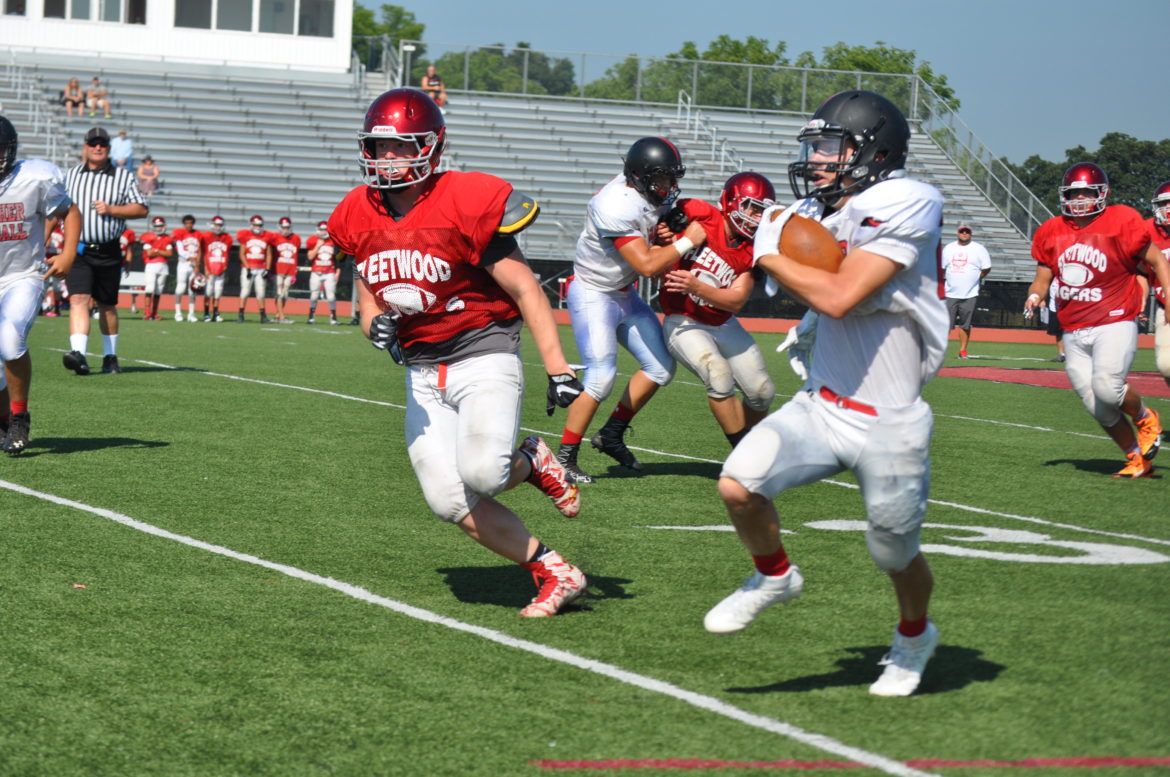 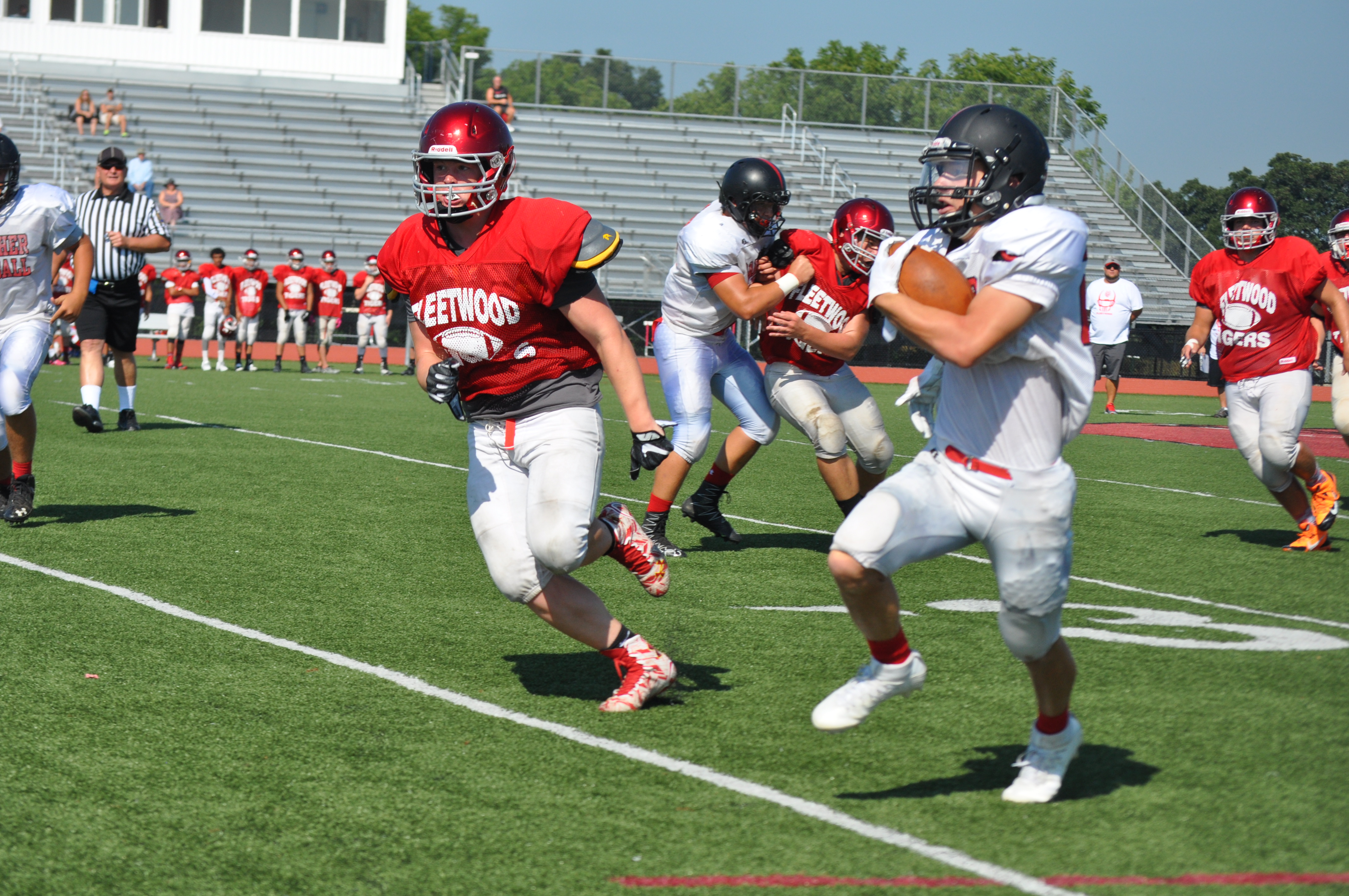 Saucon Valley Panther junior Zach Petiet was off and running in the Fleetwood scrimmage.

The Saucon Valley Panthers traveled to Fleetwood on Saturday for their first and only scrimmage of the 2016 football season.  The Panthers battled a Fleetwood Tiger team that returned seven offensive and ten defensive starters from a squad that went 3-7 last year in the Berks County Football League. With that kind of experience and considering Fleetwood had sixteen seniors and twelve juniors listed on their roster, the assumption would be that the Panthers would have their hands full.  It was not easy but Saucon Valley showed enough offensive firepower and defensive tenacity to prove they were the better team. 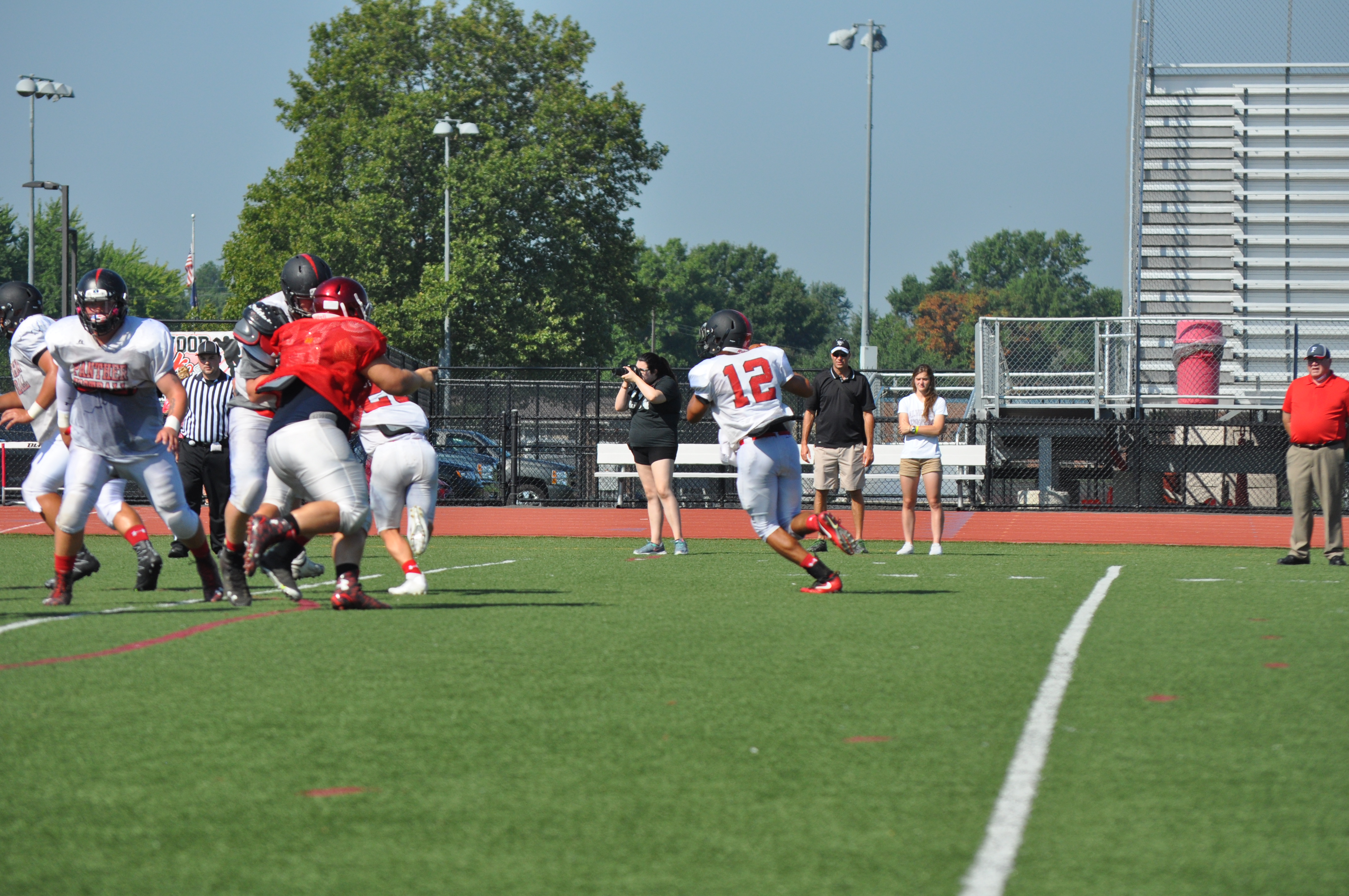 The Panthers punished the Tigers in the first part of the scrimmage in which the teams alternated possessions running ten plays for a total of thirty offensive plays each.  In the “10 and 10” segment the Panthers scored five touchdowns while the Tigers were held scoreless. 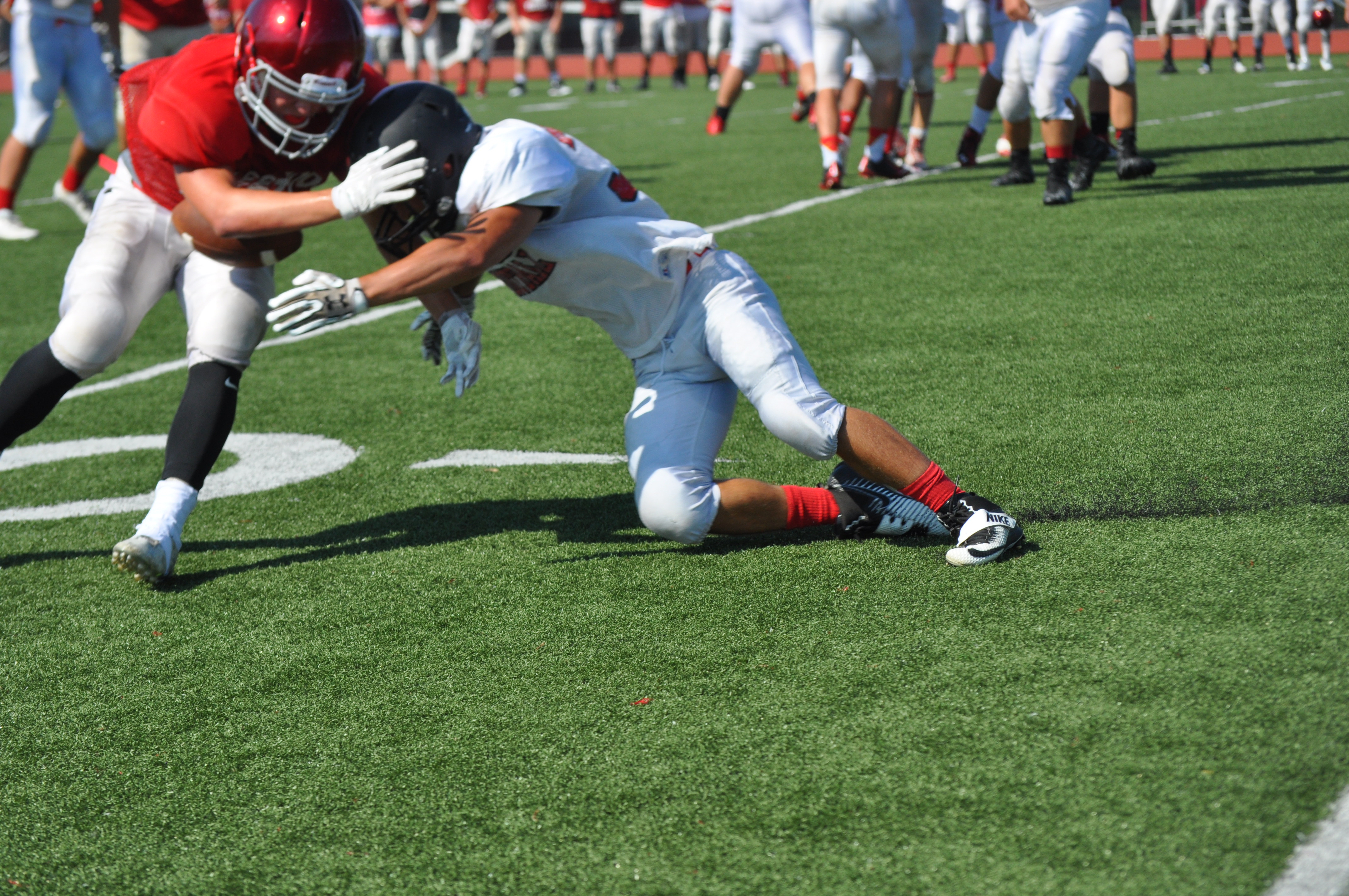 Saucon Valley Panther junior cornerback Steven Rose has a nose for the football.

In the second part of the scrimmage both teams each took turns working on their kicking games.  The teams did not go “live” to limit potential injury, but it was a chance for both programs to take a look at their “special teams” in a more competitive setting.

The final twenty minute segment of the scrimmage was game situation with a running clock.  Perhaps due to the extreme heat on the turf field, both teams were a little fatigued and sloppy as they traded interceptions and fumbles.  But at the end of it all the Panthers used two 30 yard touchdown runs by Zach Petiet and Brandon Holub combined with a “safety” sack in the end-zone by Abe Lugo to come away with a 16-7 scrimmage advantage over the Tigers. 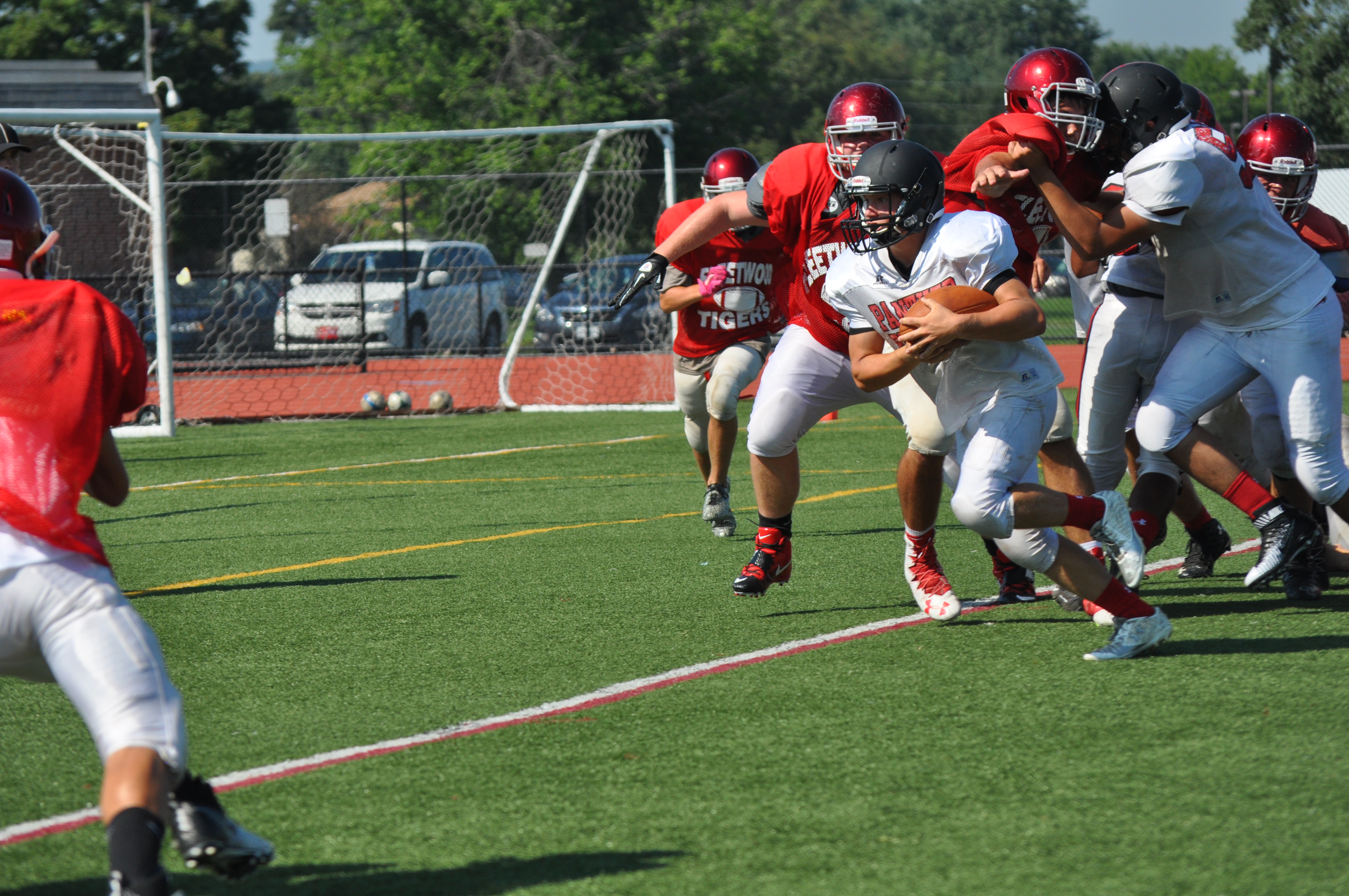 Panther sophomore Justin Kyra on his way toward the end zone.

The Panthers continue practice this week in preparation for their Friday, August 26, Colonial League opener at Bangor. Like most high schools throughout Pennsylvania, the Panthers and Slaters kickoff at 7p.m.

Good luck Panthers in the upcoming 2016 season, the Source is with you!