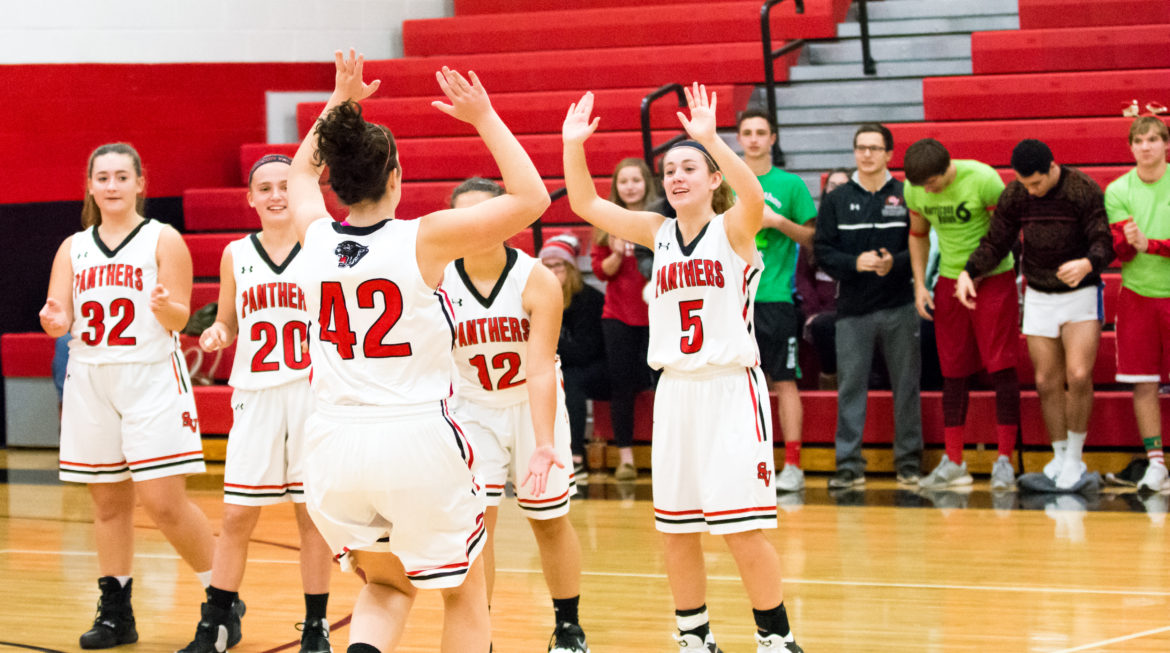 The Lady Panther Five getting ready to do battle against the Wilson Warriors. 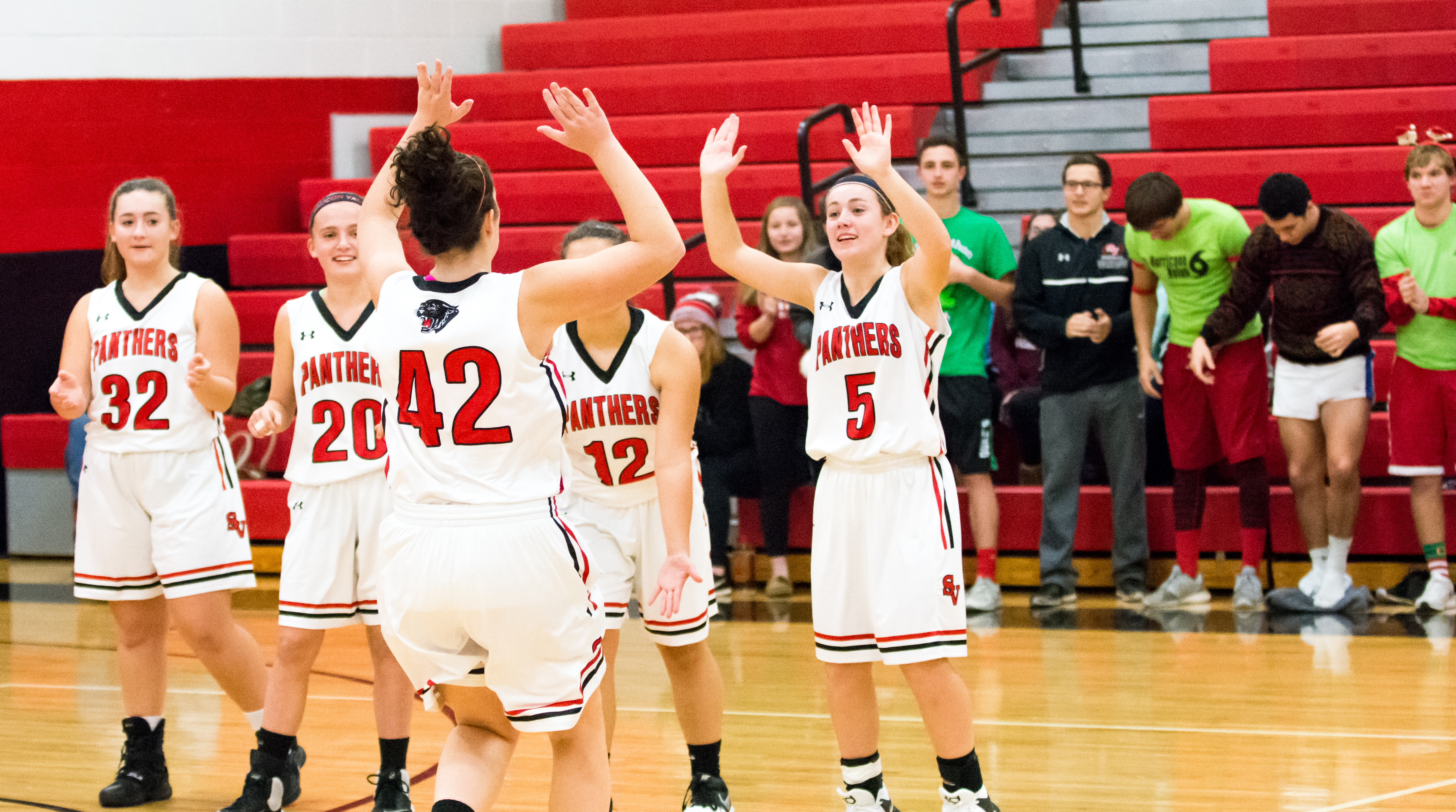 The Lady Panther Five getting ready to do battle against the Wilson Warriors.

The Saucon Valley High School girls’ basketball team did not get the win against the Wilson Warriors last night.  They lost 49-41.  However, the Lady Panthers competed for four quarters and were in the game up until the last minutes. Coach Calabrese and his team’s process of improvement certainly took a step in the right direction. 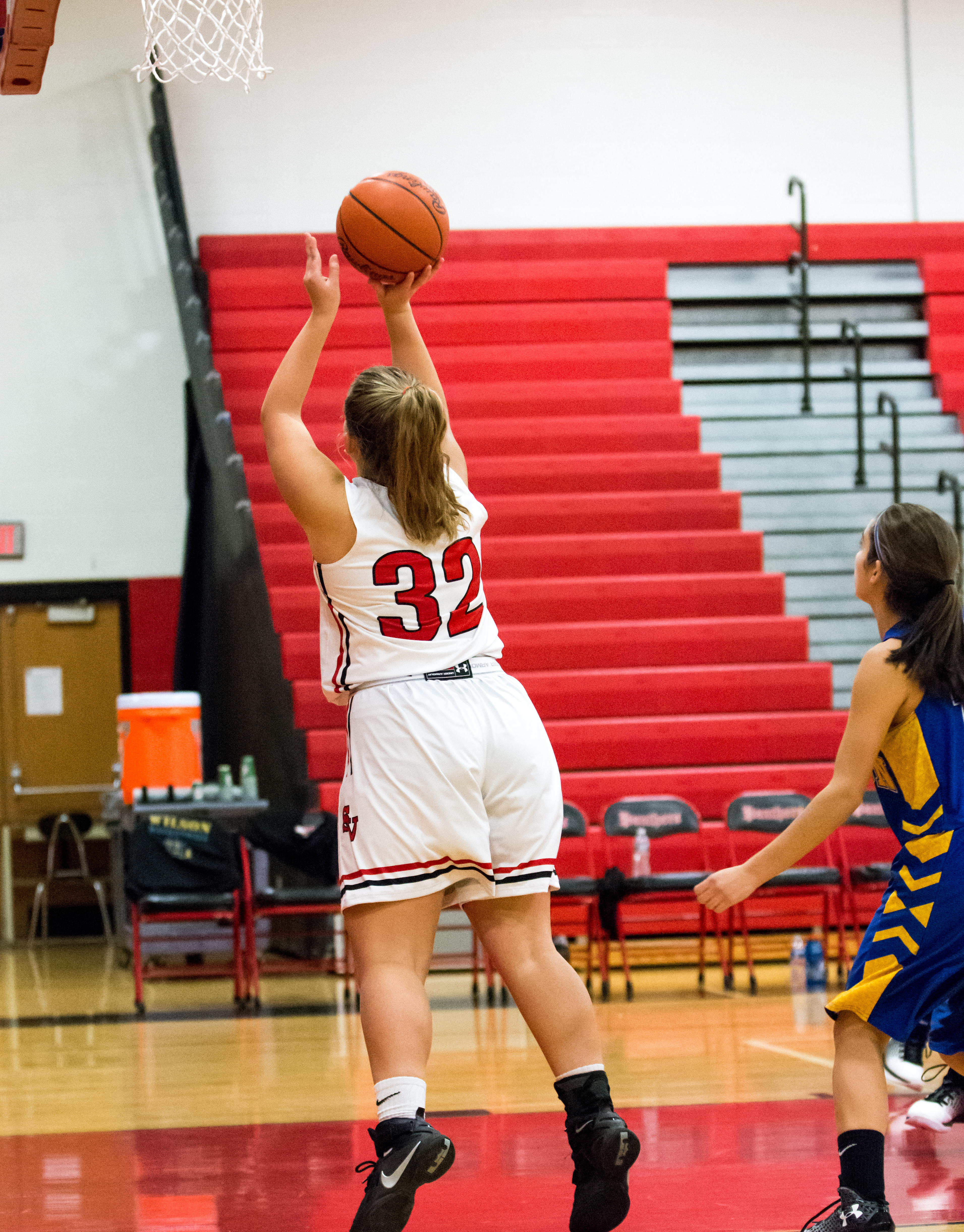 Olivia Williams scores two of her team high fifteen points in the opening quarter against the Wilson Warriors.

The 2nd quarter was highlighted by the Lady Panthers making a strong run and taking the lead against the athletic Warriors.  Even though Wilson scored the opening two points of the quarter, Saucon answered with sophomore Olivia Williams hitting a three-pointer to close the Warrior lead to 13-10.  The Panther defense held and sophomore Kiele Riefenstahl banked a jump shot at 5:07 to make it 13-12.

The Panther defense again stepped up and denied the Warriors.  Sophomore Brooke Riefenstahl capitalized on the opportunity by cutting hard to the hoop and converting a layup to give the Panthers a 14-13 lead with 2:35 left to play in the 1st half.

The Warriors responded, but Olivia Williams answered again from the outside at the 1:33 mark to regain a 16-15 lead for the Panthers.  The Warriors, however, were able to finish the half with a 19-16 advantage. 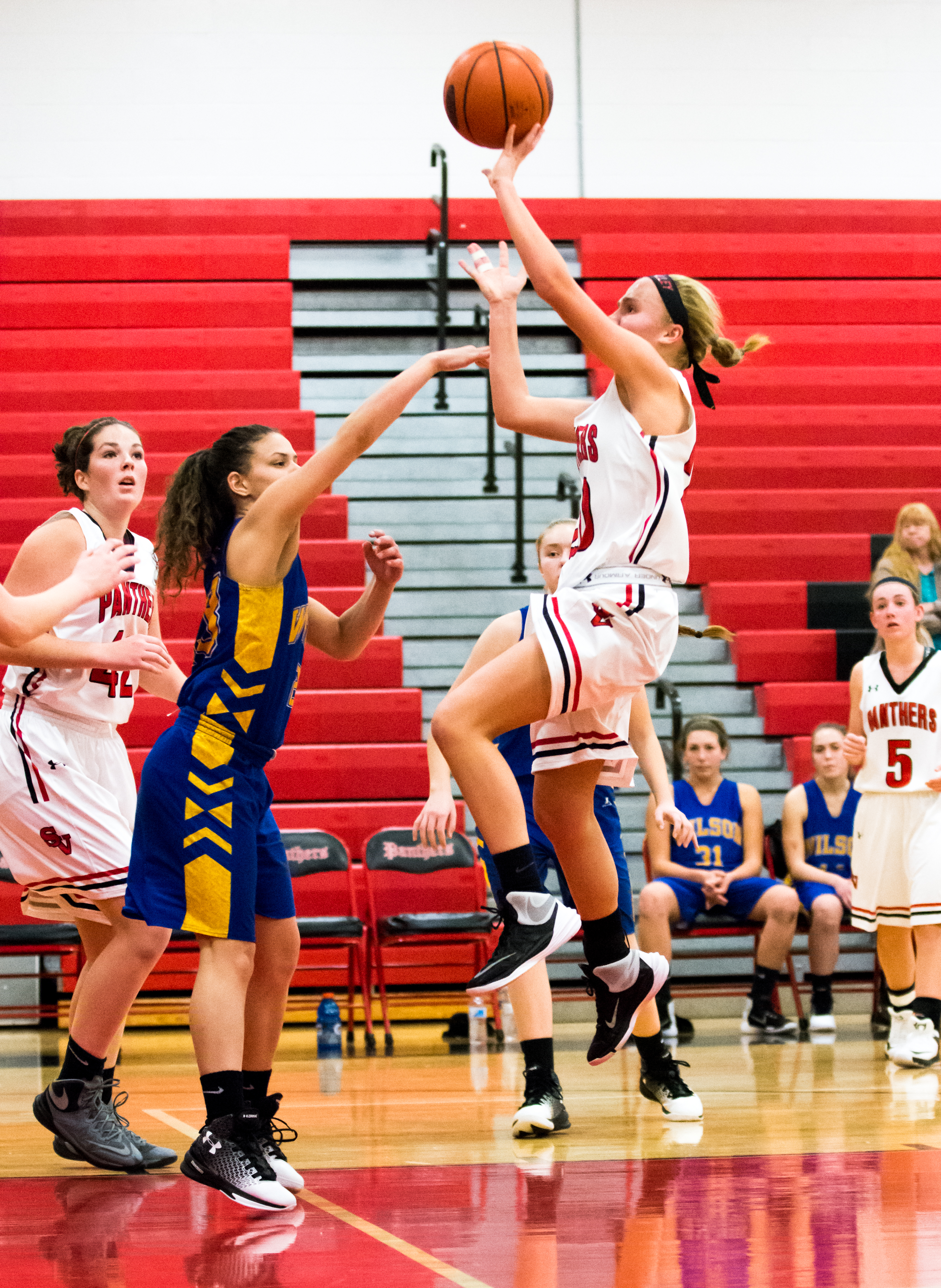 Sophomore, Brooke Riefenstahl drives hard to the hoop for the Panther lead.

Olivia Williams scored the opening points of the 2nd half making it 19-18, but the 3rd quarter was the “Helen Kreschollek” show.  The Panther junior scored nine of her fourteen points in the 3rd quarter to keep the pressure on the Warriors.  At 2:05 remaining in the 3rd, Kreschollek scored and knotted the game, 26-26.

After picking up two quick defensive fouls, however, Kreschollek was bench-bound and replaced by sophomore Katie Kramer.  Kramer answered her call to duty and scored giving the Panthers a 28-27 lead.  But, the lead was short lived as the Warriors went up 29-28 to close out the quarter. 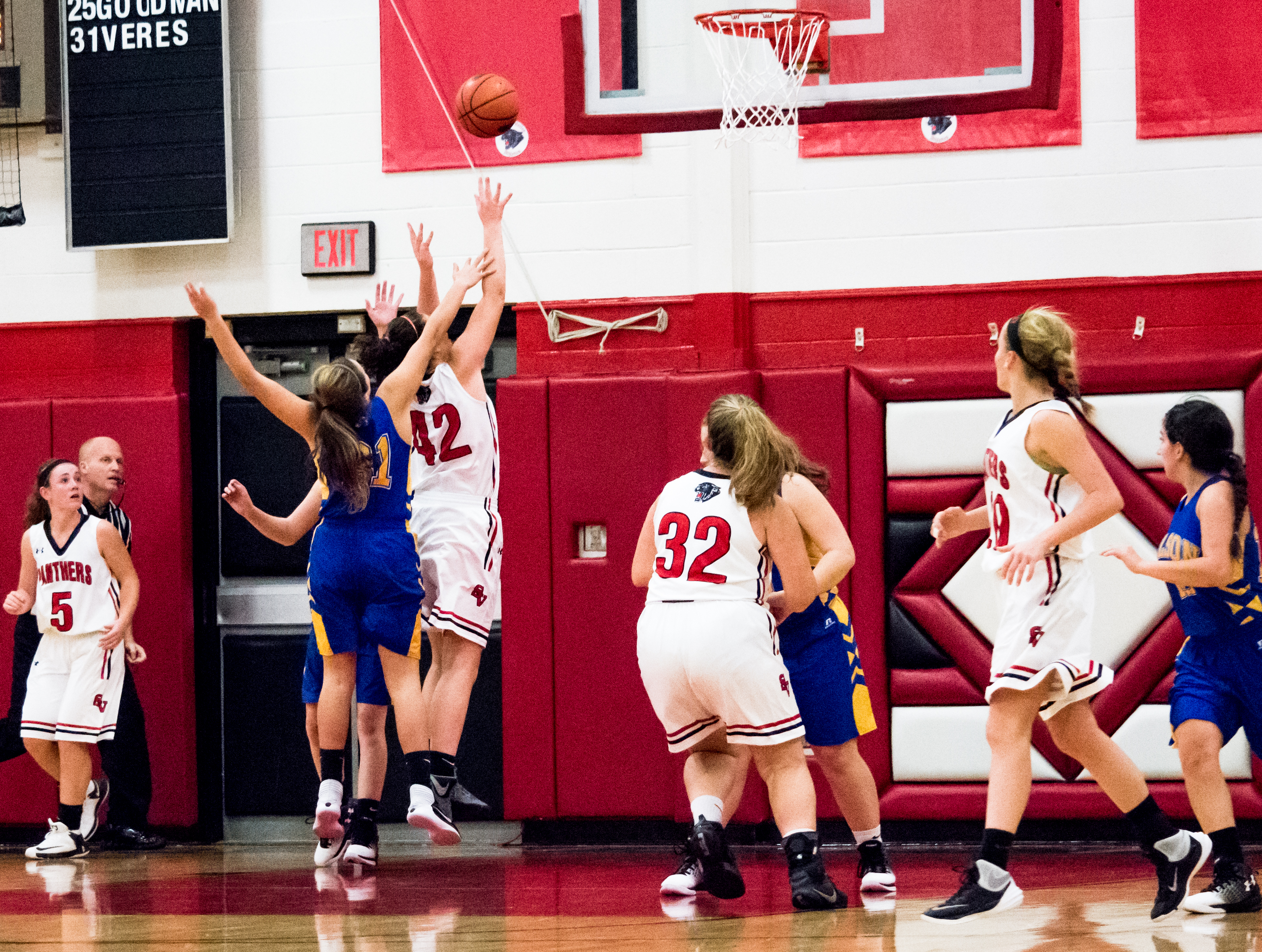 Saucon’s Helen Kreschollek nets two of her fourteen points against the Wilson Warriors.

The final quarter started with Wilson going on a 9-0 run to get a 38-28 lead with 5:45 to play. Olivia Williams twice would cut the Warrior lead to 8, but it was the best the Panthers would threaten.  The clock expired to end the game giving the Wilson Warriors a hard-fought 49-41 victory

Wilson was led in scoring by juniors Gabby Vega and Ally Quinn who each had 13 points.  Senior Morgan Casciole added 11 points for the Warriors.

Olivia Williams finished with 15 points and Helen Kreschollek added 14 for the Lady Panthers.

Even though the  Panthers (0-5) lost another game, the team’s improved performance against the Warriors (3-2) is a step down the road of improvement. The taste of prolonged battle and competition will, no doubt, benefit Coach Calabrese and his team’s learning process.  Stay the course, Panthers. You are heading in the right direction! The Source is with you!

NOTE:  The Saucon Valley JV team lost an exciting comeback bid 26-25 to the Warriors. Isabella Medei had 8 points for the Panthers. 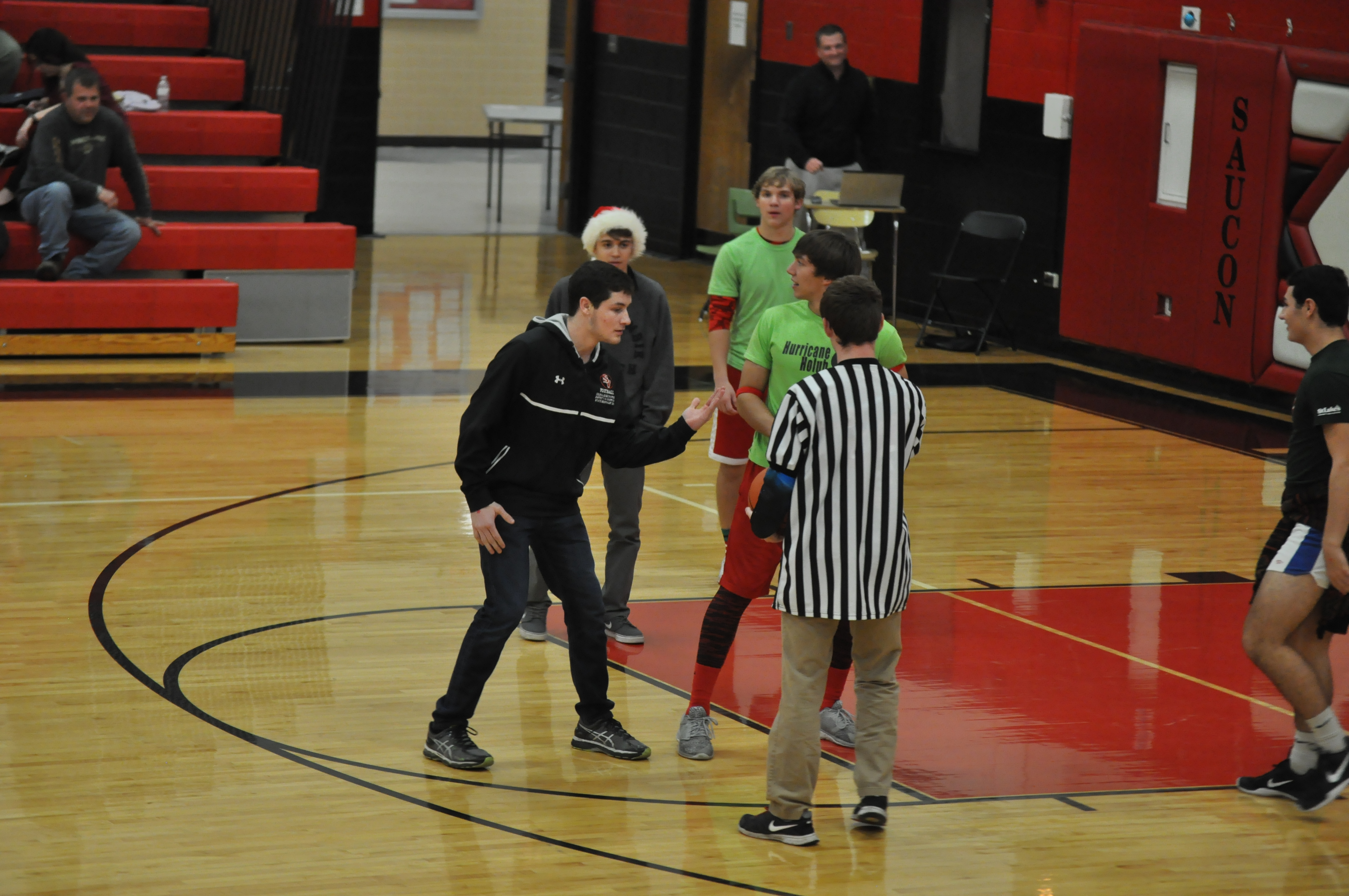 Perhaps the most entertaining halftime show in the Area. It’s DEFINITELY more funny than it is basketball.