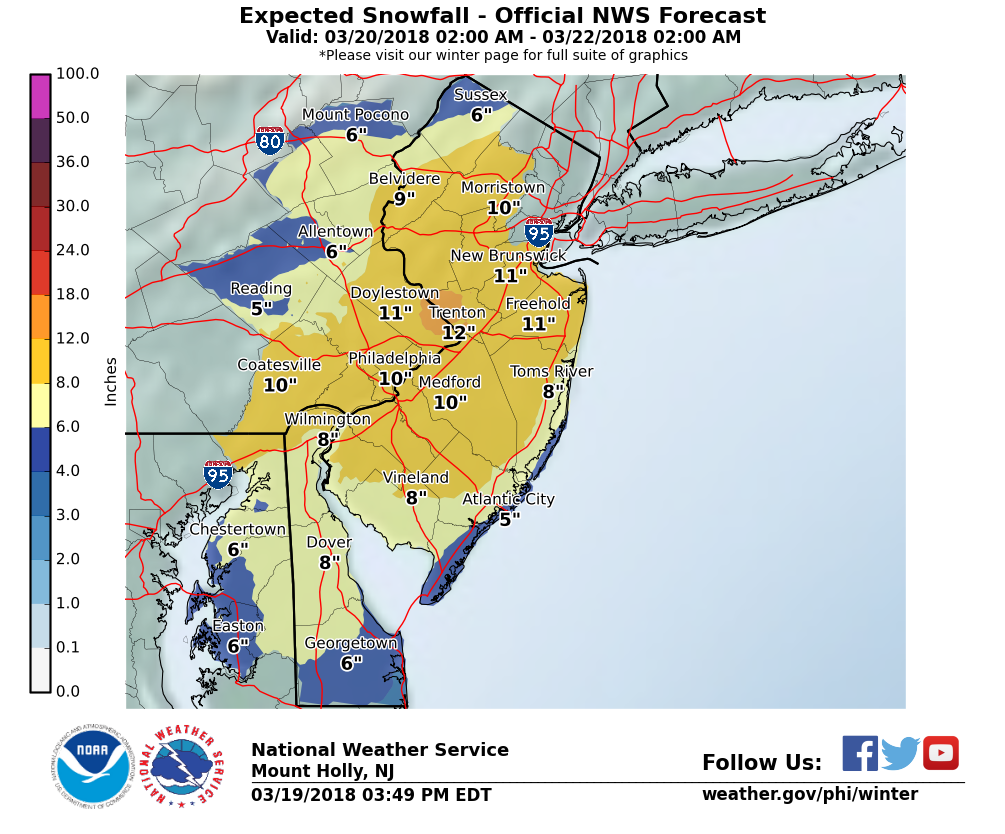 Tuesday may be the first day of spring, but if forecasters are correct, weather that is anything but spring-like is about to develop across our area.

The National Weather Service has issued a winter storm watch and is warning residents to prepare for “back-to-back nor’easters” and what could be dangerous travel conditions late Tuesday and Wednesday.

The watch area includes Northampton, Lehigh and Upper Bucks counties. The watch is in effect from late Tuesday to late Wednesday.

In a statement Monday afternoon, the NWS said the “dangerous storm threatens heavy accumulations of wind-driven sleet and snow, which may cause widespread power outages and make travel very difficult at times.”

The two storms are expected to “merge into a single intense storm off the mid-Atlantic coast by Wednesday afternoon and then head for Nantucket Island early Thursday,” the statement said. “Consideration should be given to (avoiding) unnecessary travel Wednesday afternoon and evening when the heaviest snow–with 1 to 3 inch per hour accumulation rates–should occur.”

As of late Monday, the forecast for our area is for mainly snow, with 5 to 8 inches and isolated accumulations of 12 inches possible, per the weather service. Sleet and freezing rain could mix in with the snow and cut down on total accumulations.

A potential snowfall map issued by the National Weather Service for eastern Pennsylvania and New Jersey shows the epicenter of the forecast snow–an area where more than a foot could fall–along the Delaware River from around New Hope in east central Bucks County to near Trenton, Mercer County. 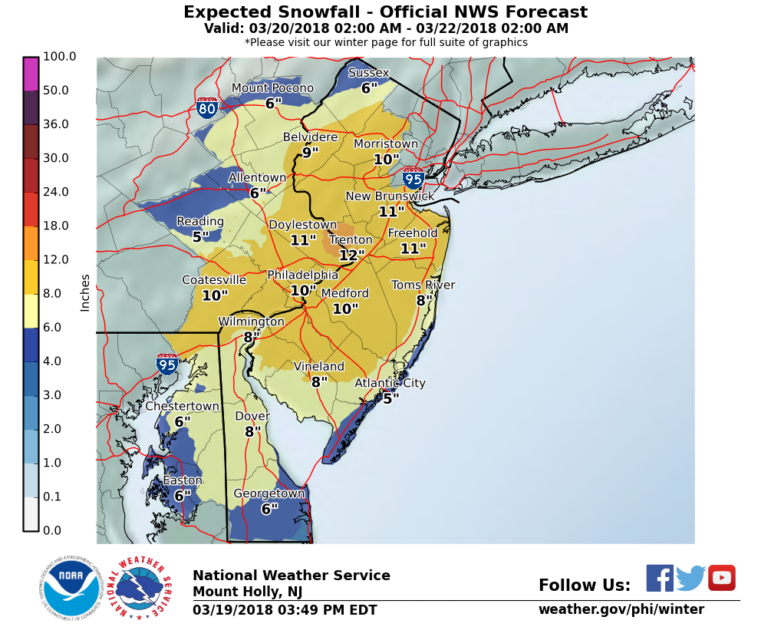 “Roads in the hilly areas may become impassable if 1 to 3-inch per hour snowfall rates
develop as expected Wednesday afternoon,” the NWS said. “Power outages are possible” due to northeast to north winds that could gust at 20 to 30 mph at times.

The forecast storm is coming approximately mid-way through what’s been a fairly unsettled, colder-than-average March.

Although some parts of the area have seen significant snow, other areas–mainly at lower elevations–have seen less snow because of marginal temperatures during recent storms.

Eastern PA Weather Authority is forecasting a two-wave storm, with a “lull” in between the waves.

“(The) first wave will be Tuesday morning through Tuesday mid-evening,” EPAWA said in a Facebook post Monday afternoon. “Then wave #2 is late Tuesday night and most of Wednesday with mix to heavy snow.”

Wave #2 has the potential to produce heavier snow across a wider area, they said.