A new Pennsylvania fireworks law (House Bill 542) that took effect last year means state residents can now legally purchase the higher-powered explosives that were once only sold at fireworks stores along the state’s borders to out-of-state residents. 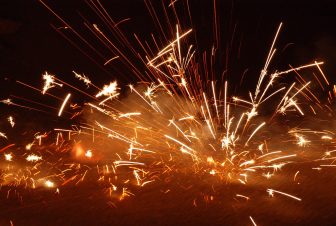 Consumers 18 and older can now purchase and use “Class C” or consumer-grade fireworks such as firecrackers, Roman candles, bottle rockets and similar fireworks that contain a maximum of 50 milligrams of explosive material.

But purchasers of these ‘bigger boomers’ should know that local and state laws regulating noise and setbacks are in place, and will be enforced by law enforcement authorities.

One requirement of the new state law that residents of Hellertown borough and other more densely populated local communities should pay particular attention to is a restriction on where fireworks may be discharged.

Specifically, they cannot be discharged within 150 feet of any occupied structure, which means that most yards in town aren’t large enough to accommodate their display.

Other state restrictions on fireworks’ use are:

Hellertown Police Chief Robert Shupp said that in spite of the new availability of higher-power fireworks, so far this summer there has not been an uptick in fireworks-related complaints in the borough.

“We received one noise complaint this weekend regarding fireworks and the resident stopped when asked to by a neighbor before we arrived on scene,” Shupp said Tuesday.

He noted that the borough’s nuisance ordinance “could come into play if the noise (from fireworks) is deemed to be such.”

“As with most ordinances, we will be advising people of the nuisance ordinance if we are called there and depending on how each incident presents itself would (then) determine if we issue a warning or citation,” he said.

Borough zoning officer Kris Russo noted that the borough’s noise ordinance “is not limited to certain times of the day…it can be (enforced) any time.”

Under the nuisance ordinance, a person can be cited for “the willful making or causing to be made of any loud, boisterous or unseemly noise or disturbances so as to disturb or annoy the peaceable public near to or upon any street, lane, alley, park, square, common or in any public building, public place or business place, or private building or private place within the Borough of Hellertown.”

And as before, permits are required for professional or “display” fireworks.

Display fireworks are classified by the state as “salutes that contain more than two grains or 130 milligrams of explosive materials, and professional-grade aerial shells containing more than 60 grams of pyrotechnic compositions.”

In either Hellertown borough or Lower Saucon Township, anyone planning to host a professional fireworks display must obtain a permit.

“Because of the close proximity of residential homes in the borough, I do not have requests of property owners asking to hold a public display,” Russo said. “There just isn’t enough room to accommodate this.”

Noise complaints of any kind and all fireworks-related complaints in Saucon Valley should be reported to local police by calling 610-759-2200, which is the Northampton County non-emergency number.

Click here to learn more about the new fireworks law.