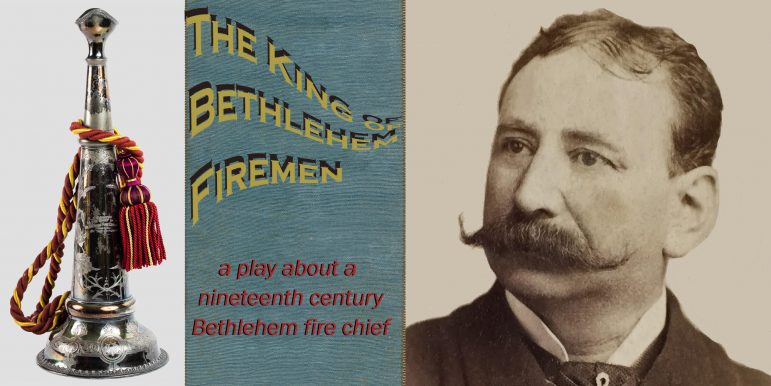 A new play, The King of Bethlehem Firemen, is set to debut in Bethlehem this weekend, and although it is about someone of historical note from the Christmas City, there are important modern-day Saucon Valley connections to it.

The other local connection to the play relates to its central character: S. Charles Seckelman, who was the visionary chief of Bethlehem borough’s fire department in the 1880s.

Randy Yardumian is Seckelman’s great-great-grandson, and says he never knew about his industrious ancestor until he moved from where he grew up near Philadelphia to the Lehigh Valley 15 years ago. At that point, he had already been a firefighter for 15 years. 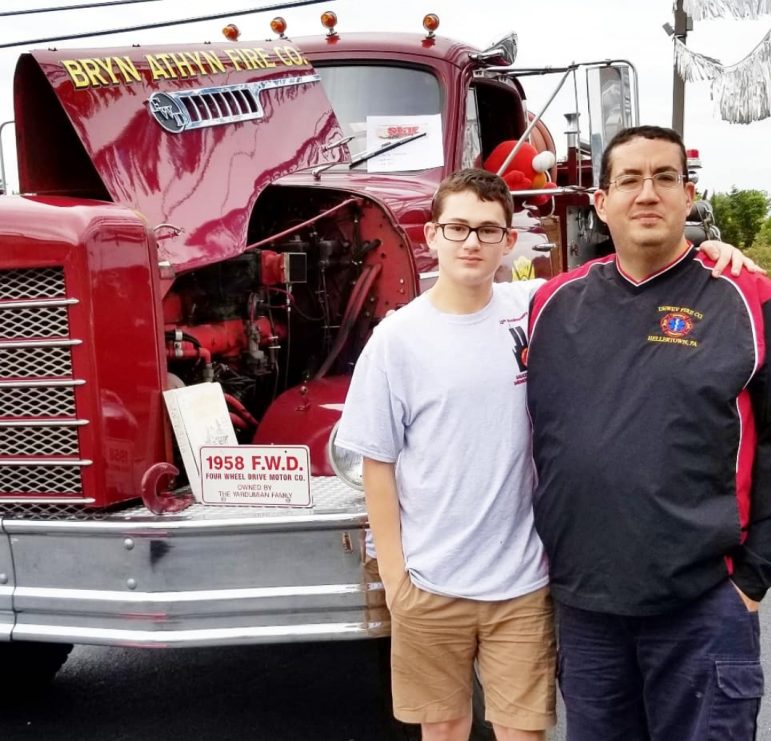 Hellertown residents Randy Yardumian and his son Cody are looking forward to watching a play about their ancestor, S. Charles Seckelman, who was an early fire chief for what was then the Borough of Bethlehem. They are pictured standing next to an antique Bryn Athyn fire truck Yardumian owns, at the Star Pre-Owned Hellertown Classic Car Show in September.

At a Christmas party, his aunt revealed that his great-great-grandfather was the first fire chief of Bethlehem, he said, which sparked his interest in researching his famous relative.

A Civil War veteran who was born in New York, Seckelman enlisted in the Pennsylvania National Guard after he moved to the Keystone State, and was part of an outfit assigned to defend Harrisburg when the Battle of Gettysburg took place in 1863.

After the war, Seckelman became a firehose salesman for the Goodyear Tire & Rubber Company, using his knowledge of firefighting to help modernize not only his own department, but those of other municipalities as well.

“He was actually a very slick guy,” Yardumian said. “His knowledge of firefighting was pretty renowned.”

He was so highly regarded, in fact, that upon his death in 1900 the Pennsylvania State Firemen’s Association adopted the following resolution to honor him:

“[We] will ever cherish the memory of Brother Seckelman as that of an enthusiastic fireman, one whose heart was in his work, who took a pardonable pride in being a firefighter, and one who kept abreast of every idea and movement to advance the firemen’s cause, and, consequently, the welfare of the people.”

“We testify to Brother Seckelman’s worth as a citizen and man and express our hearty appreciation of his many sterling qualities of heart and mind. He was genial, whole-souled, free-hearted; his company was like beams of sunshine, and in his soul, there was no malice, no rancor, only kindness and cordiality.”

Seckelman is buried in Bethlehem’s historic Nisky Hill Cemetery, where his grave is now more prominent thanks to another descendant who recently purchased a new headstone to replace the weather-beaten, 118-year-old gravestone that had become difficult to read.

Randy said he and his son Cody–who is a junior firefighter at Dewey Fire Company in Hellertown–are excited to see the accomplishments of their ancestor brought to life at one of the upcoming performances, particularly since they seem to have inherited the family ‘firefighting gene.’ That gene was also inherited by Seckelman’s great-grandson, Randy’s father Sam, who was a firefighter for Bryn Athyn Fire Co. from 1957 until his retirement about five years ago.

“The bug got into me,” Randy said, noting that Nov. 12–in addition to being his birthday–is the 30th anniversary of his joining the Bryn Athyn Fire Co. as a junior member.

Prior to each performance of the play, there will be a brief multimedia presentation on early firefighting in Bethlehem.

The presentation and play are both based on the book Firefighting in Bethlehem, Pennsylvania, 1742–1917, by Chris Eline, Nancy Rutman and Samuels, which was published by Perseverance Publishing LLC in 2017.

Yardumian noted that there is an entire page devoted to Seckelman in that book.

During the play, audiences can expect Simmons to take them through scenes of intense firefighting, personal tragedy and a lucid view of life in late 19th century Bethlehem.

Simmons is a Lehigh Valley and New York City-based actor, writer and musician who has produced, directed and performed in the long-running “An Evening At A British Music Hall” as well as appeared in one-man shows, radio dramas, musicals and stage plays.

George B. Miller is the former director of the Theatre Outlet and currently the artistic director of Selkie Theatre, an Irish-American Theatre Company in the Lehigh Valley. Miller has won awards for his direction and has experience directing every type of theater, including drama, comedy, musical, experimental and historic plays.

The King of Bethlehem Firemen performance schedule is:

For more information about the play or to purchase tickets visit PerseverancePublishing.com.