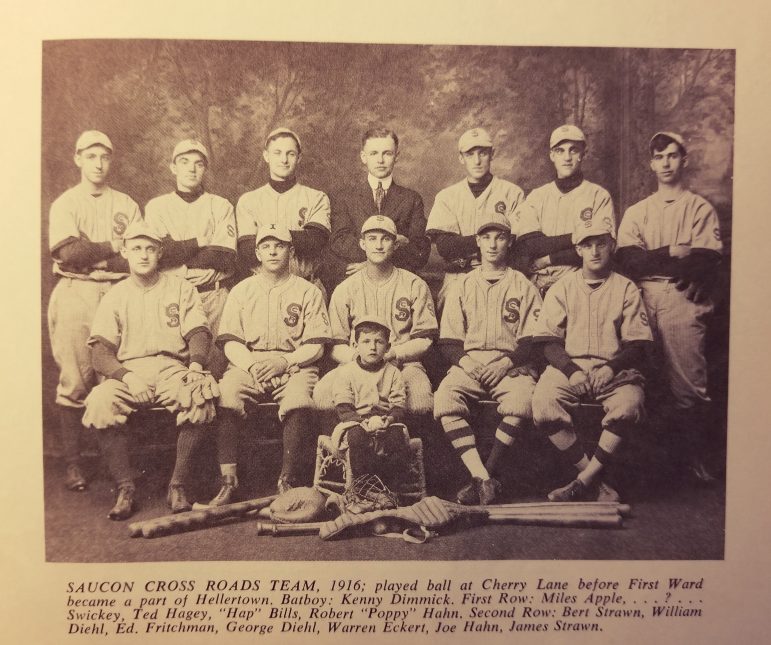 This rare photograph of the 1916 Saucon Cross Roads baseball team appeared in the 1972 Hellertown centennial commemorative booklet, on the same page as this 1903 story. Several years after the above photo was taken the village of Cross Roads–which was located in the area around Main and High streets–was annexed from Lower Saucon Township by Hellertown borough. The page in the 1972 booklet on which both the photo and story appeared was sponsored by Crossroads Hotel, which is still in business today.

Note: The following story was originally published in The Bethlehem Globe newspaper on Sept. 1, 1903. It was reprinted in the 1972 booklet “Hellertown Centennial, 1872-1972.”

Baseball for Blood: Hellertown and Macungie Teams in Hot Rivalry

Baseball rivalry between Hellertown and Macungie is at fever heat. On Saturday Macungie defeated Hellertown and immediately after the game the manager of the Hellertown team challenged the Macungiettes to play a game for a purse of $50.

Last evening the editor of the Allentown Call received a telephone message from Mgr. Singmaster of Macungie, stating the Hellertown’s challenge is accepted and that this morning a forfeit of $10 would be placed in the hands of the editor of the Call as a guarantee that the Macungie end of the purse will be put up as soon as the Hellertown representative comes to town, the editor to name the umpire.

In this connection, says the Call, the editor would suggest that he withhold the name of the umpire from both sides, no one outside the editor and the umpire to know who is to officiate in that capacity until the one selected calls “play ball.”

In choosing the umpire the editor will select a man who is a resident of neither town and, if possible, one who has never played on a team that was the opponent of either Hellertown or Macungie.

Interested in local baseball history? Attend an upcoming free talk about the 1918 Bethlehem Steel team and its connections with Major League Baseball icons such as Babe Ruth and “Shoeless” Joe Jackson at the Lower Saucon Township Historical Society.