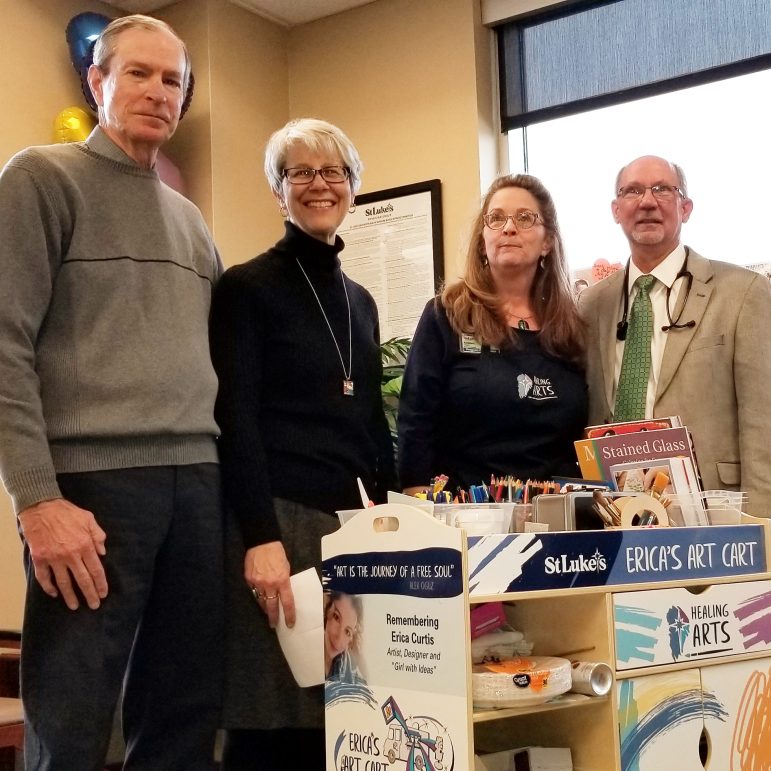 Art truly has the power to heal. That was the message behind a moving dedication ceremony held last month in the Cancer Center Hope & Healing Room at St. Luke’s Anderson Campus in Bethlehem Township.

The ceremony was held to celebrate the donation of several “art carts” in honor of Erica Curtis, a cancer center patient who found comfort during her treatment at St. Luke’s by creating jewelry from materials in the carts.

Curtis died at age 40 in 2018 after a courageous two-year battle with cancer, and her parents were on hand to help unveil one of the new art carts they donated.

Curtis’ father, Neil, said he remembers his daughter for her honesty, integrity and creativity.

“Having her art cart put into service at three of St. Luke’s Hospital’s locations seems very fitting,” he said. “I can see her smile now, knowing she is somewhere, knowing she is helping others in need.”

Kristen Ward, coordinator of the hospital’s Healing Arts program, has been an art teacher for 36 years and an artist-in-residence at St. Luke’s since September.

The benefits of engaging in artistic activity for patients go well beyond the actual making of the art, she said.

“I think what the patients get overall is a wonderful distraction,” Ward said. “You have a patient who is sitting there hooked up to medication and they expect to be miserable all day.”

The creative process, whether it involves sketching something simple or admiring a piece of art or talking about art, can help transport patients outside themselves and lower stress and anxiety, she said, noting that “the healing arts program (at St. Luke’s) has become part of treating the whole person: mind, body and spirit.”

“We are currently looking to expand our program with volunteers,” Ward added.

Someone who’s benefited from the program that meant so much to Curtis is George Young, a 50-year-old longshoreman and volunteer firefighter from Franklin Township, N.J., who had never considered creating art or wearing jewelry before he became a St. Luke’s oncology patient.

These days, when people comment on the iridescent blue pendant he wears on a leather cord around his neck, Young said he’s proud to tell them, “I had cancer and I made it while I was getting chemo at St. Luke’s.”

Initially reluctant to make the pendant, he recalled that when he got it back after it was fired in a kiln, he was amazed by how good it looked. Then he made two more.

The patients design small pendants out of scraps of dichroic glass donated by Riley, who later fires them in his basement kiln. Dichroic glass is a shimmery, reflective glass that changes colors in certain light.

“People say, ‘I can’t draw’ or ‘I can’t paint,’ but they can pick out colors of glass they like and put them together in an abstract way,” Riley said.

“I think there’s a basic human need to express oneself, to tell one’s story,” he said. “The program helps patients express themselves in a visual way.”

“Honestly, I’ll be wearing this for the rest of my life,” Young said of his pendant.

Hearing that is something which doubtless would have made Erica Curtis smile.

“She would be so happy,” said her mother, Lyndell Curtis, of the donation. 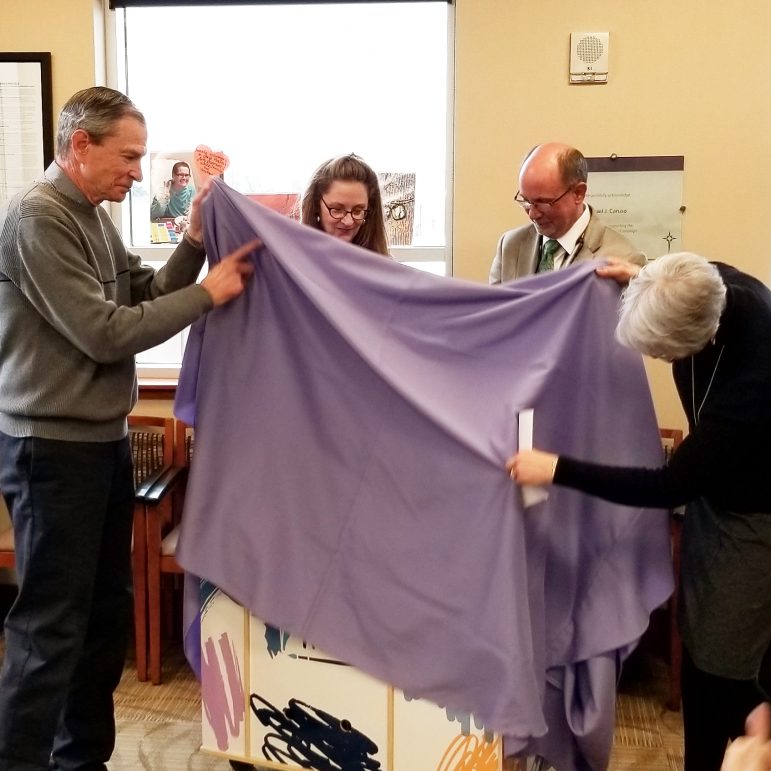 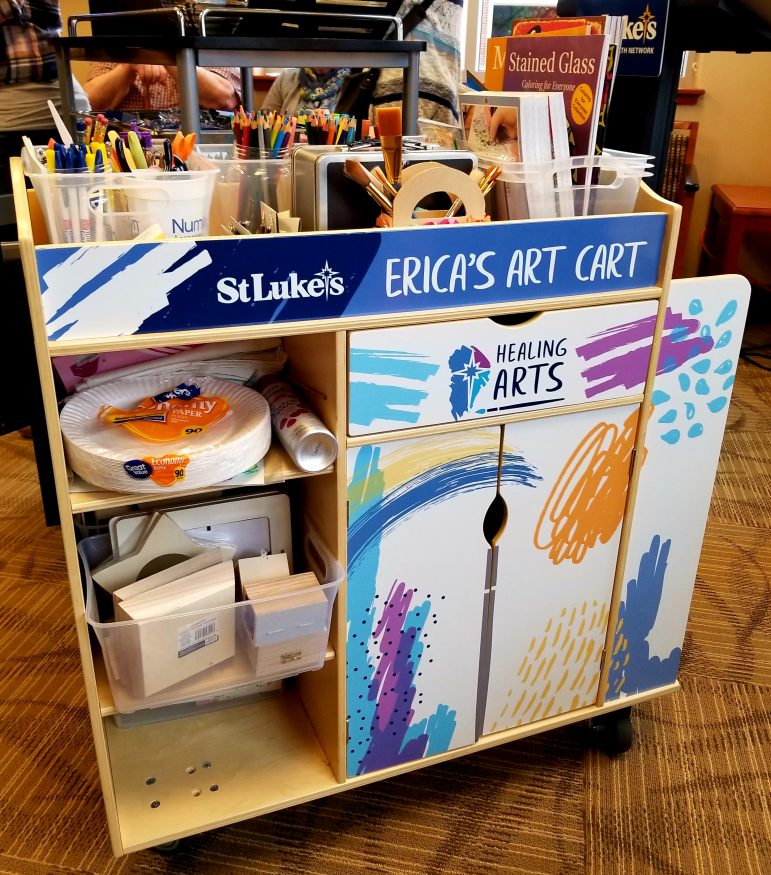 Above, an art cart donated to St. Luke’s Cancer Center’s Hope & Healing Room by the Curtis family in memory of their daughter, Erica Curtis, who died in 2018 at the age of 40. Curtis found comfort in creating jewelry using materials from the carts during her time at St. Luke’s Anderson Campus. 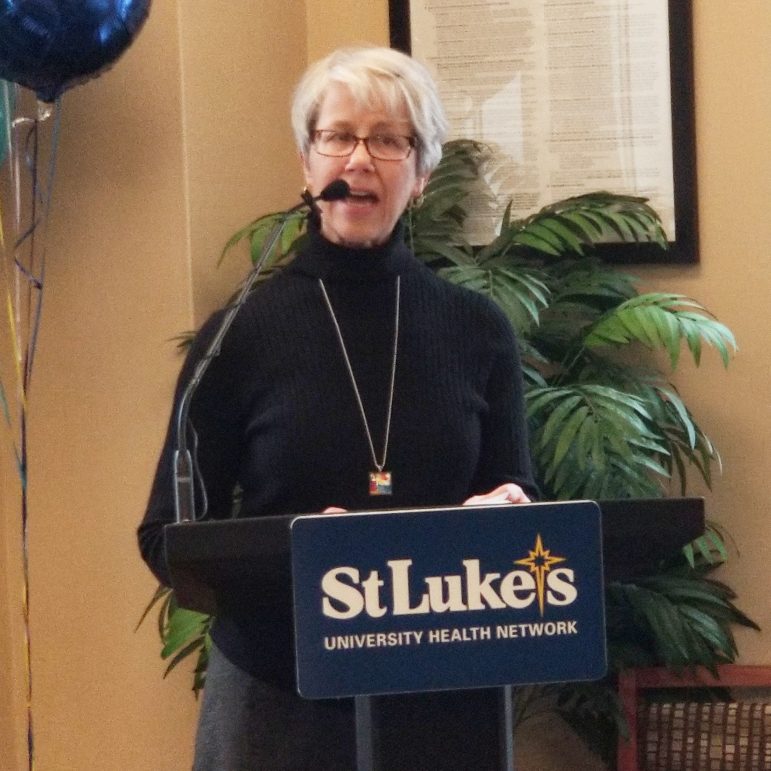 Lyndell Curtis, whose daughter Erica was inspired creatively by the art carts at St. Luke’s Anderson Campus’s Cancer Center, speaks at the dedication of a new art cart in her memory on Feb. 18. 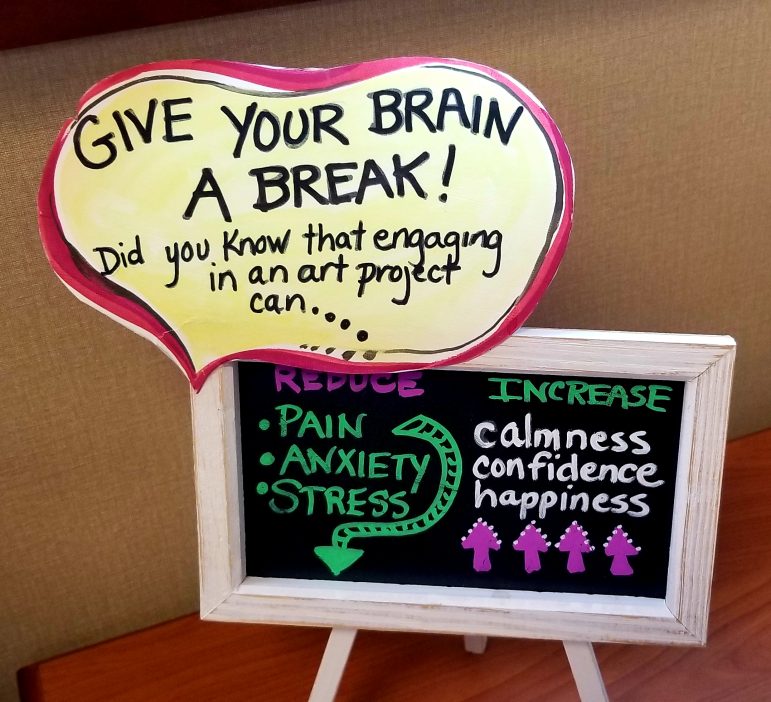 Messages about the power art has to heal can be found in the Cancer Center’s Hope & Healing Room. 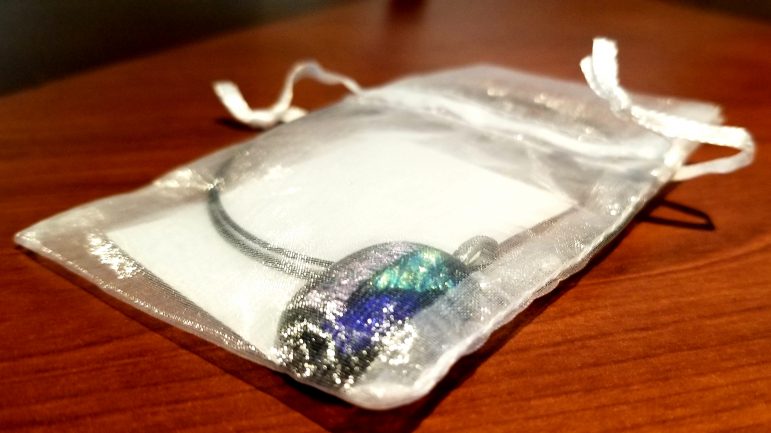 An iridescent blue pendant similar to the one worn by St. Luke’s cancer patient George Young, who has benefited from the ability to make jewelry using materials from an art cart. 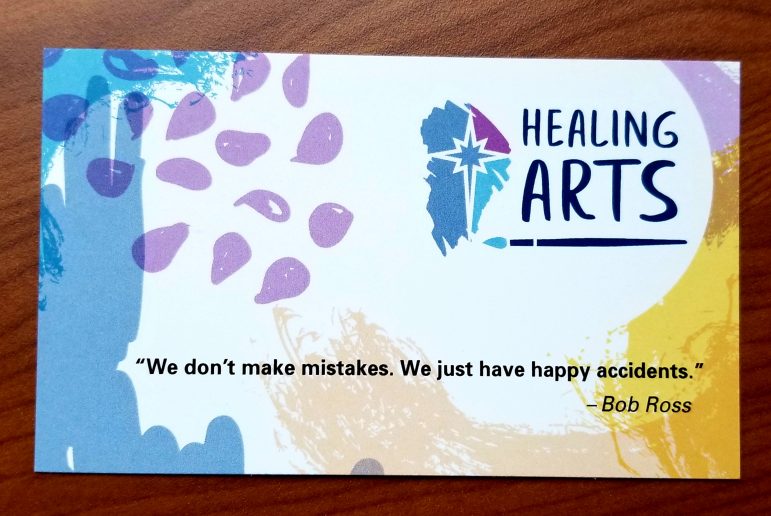 Cards in the Hope and Healing Room at St. Luke’s Anderson Campus’s Cancer Center contain quotes by well-known artists, such as famed television painter and art instructor Bob Ross, who died of lymphoma in 1995. 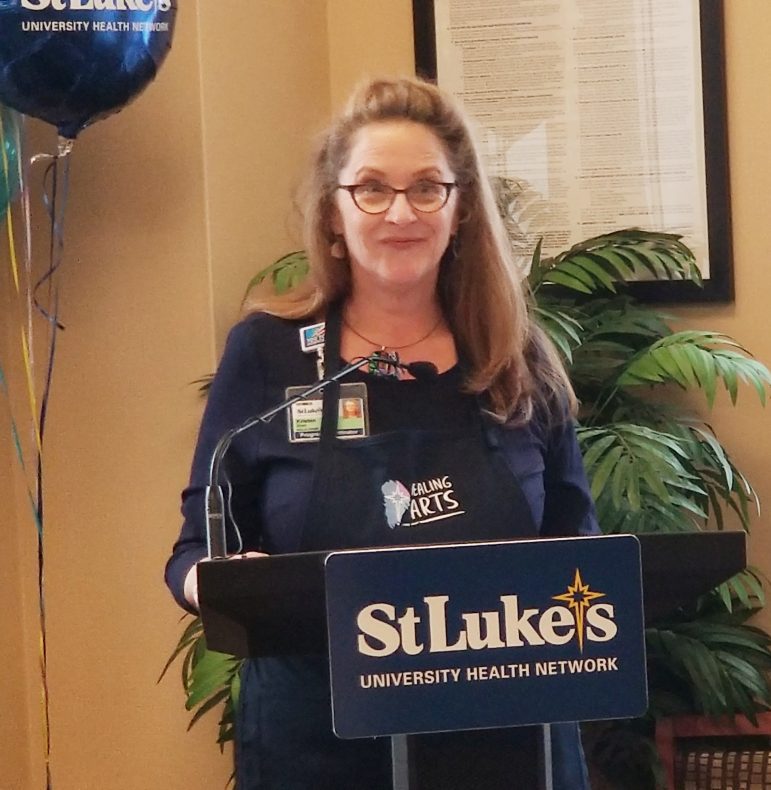 Artist and teacher Kristen Ward is coordinator of St. Luke’s University Health Networks’ Healing Arts program, which she said will hopefully expand with help from volunteers. 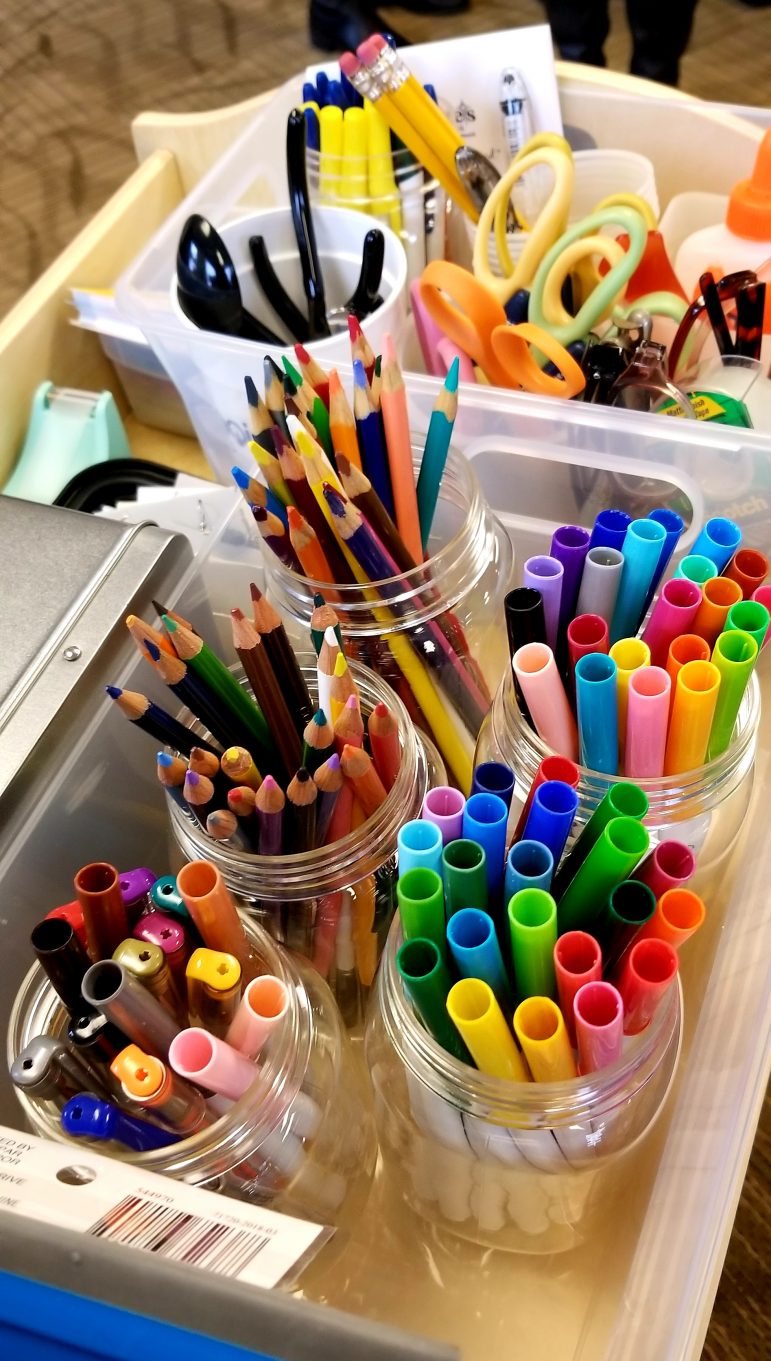 The art carts are loaded with many different materials, from colored pencils to markers to glue.