Correction: Since contract awards must be approved by a board majority (five or more votes), the balcony painting project was not awarded, as the vote in favor of it was 4-3. Two board members were absent at the meeting. An earlier version of this story erroneously indicated that the motion was approved.

The Saucon Valley School Board president said at Tuesday night’s meeting that she strongly objected to spending money to paint a portion of the high school’s auditorium that is normally only used once a year, as part of a larger auditorium renovation that will take place.

Susan Baxter voted against spending more than $6,000 to replace drywall and paint the upper balcony section of the auditorium, which she said is  only used for seating when graduation exercises are held each June.

The balcony painting is part of a larger refurbishment of the 1970 auditorium, which includes painting the entire room and replacing the seats.

District business manager David Bonenberger said the $6,375 balcony painting project was planned “so when you look at it it all matches the same.”

Carpeting that acts as soundproofing on a back wall will be removed and replaced with painted drywall, he added.

“I really object to this,” Baxter said. “I feel like the school district is not being wise with their money.”

“We’re painting a room that you can’t even see the color of what’s on the walls,” she continued. “I think that’s what’s called ‘burning a hole in your pocket,’ and I am opposed to that.”

“Was there a wallpaper section in that area too?” asked board member Edward Andres.

Bonenberger confirmed there is wallpaper in the upper balcony and said that section would be repaired–because it’s separated from the wall–and painted.

“We could glue it down,” said Baxter.

Board member Bryan Eichfeld said the wallpaper would be painted over to match the rest of the repainted auditorium.

The motion to approve painting the balcony failed by a vote of 4-3, since contract awards must be approved by a board majority (five or more votes). 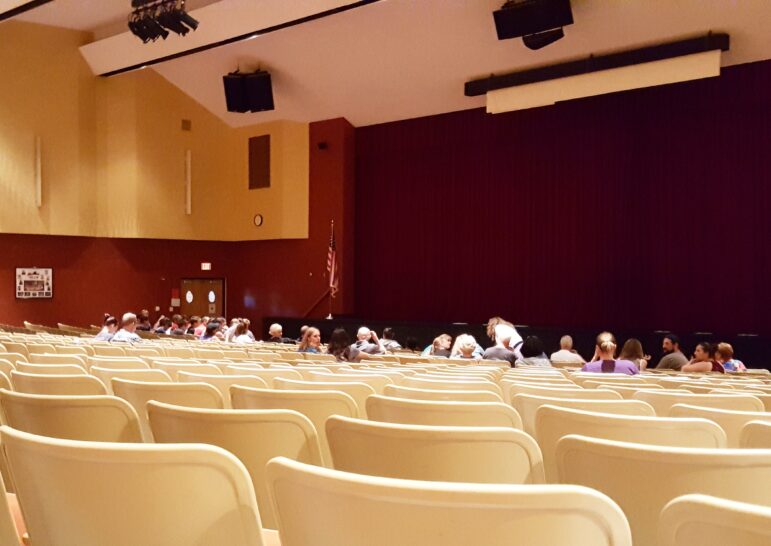 The other bids for the projects that are part of the auditorium renovation were all approved with dissenting votes cast as follows:

Several board members also questioned the need to repaint the black wall behind the stage.

Eichfeld said that although as a member of the board’s facilities committee he recommended repainting it, but had changed his mind.

“My gut is, it’s black paint. If you just went in there with a roller and hit the little spots that are showing I can’t imagine that it would be a major job that our maintenance people couldn’t do,” he said. “I’ve kind of changed my mind on it, but it’s not a big deal one way or the other.”

Andres said the cost to do it as part of a larger project–which came in less than was estimated–is “marginal,” and that attempting to complete the work as a separate project “will be less efficient and cost more in the long run.”

Board members Mark Sivak and Shamim Pakzad were absent from the meeting.

The entire meeting can be watched on YouTube. View the agenda here.