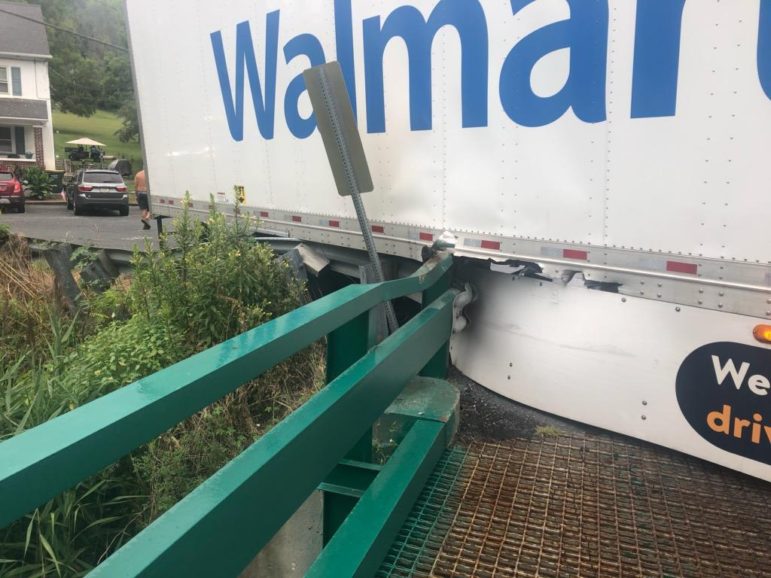 A Walmart tractor-trailer was disabled and caused a major road closure when the driver attempted to turn right from narrow Ringhoffer Road onto Easton Road in Lower Saucon Township Tuesday afternoon.

A truck driver pulling a Walmart trailer got more than he bargained for Tuesday afternoon, as he attempted to make a right turn from Ringhoffer Road onto Easton Road in Lower Saucon Township, striking the bridge that spans a branch of the Saucon Creek at that intersection.

In a traffic advisory issued via their Nixle alert system and Facebook, township police warned motorists that the road is blocked in that area and that a heavy duty tow truck is responding to attempt to extricate the massive vehicle from its position halfway on the green metal bridge.

Truck traffic has been utilizing Ringhoffer Road as part of a detour around a section of Easton Road that is closed until Sept. 2, as part of a PennDOT drainage pipe replacement project.

Easton Road has been closed between Ringhoffer Road and Countryside Lane in the area of the I-78 overpass since mid-July as a result of the project.

With the recent and ongoing construction of large warehouses along the north side of Easton Road between Ringhoffer Road and Cherry Lane, tractor-trailer traffic in the area has been on the rise in 2019.

The warehouses are part of Lehigh Valley Industrial Park VII, which is located in the City of Bethlehem.

Easton Road is the dividing line in that area between the city and the township. 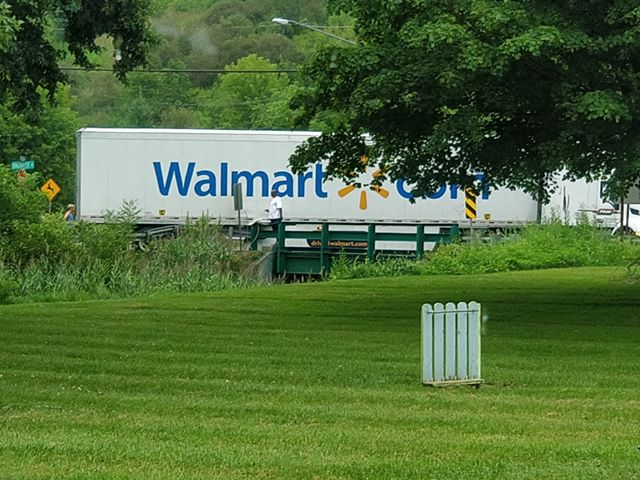 A photo taken by an eyewitness at the scene of the disabled tractor-trailer shows a man who may be the driver speaking to a woman standing several yards away, next to the vehicle, which is stuck part-way on the bridge at the intersection of Easton and Ringhoffer roads in Lower Saucon Township.