A Lower Saucon Township man is charged with felony aggravated assault, felony disarming of a law enforcement officer and a host of other charges after township police say he allegedly attempted to take an officer’s Taser from him during a struggle in a parking lot in the 2400 block of Black River Road Wednesday. 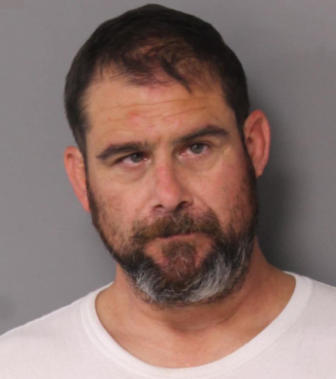 Ralph Lee Shoemaker, 44, is accused of trying to disarm a Lower Saucon Township police pfficer of his Taser.

Ralph Lee Shoemaker, 44, is a convicted felon who was armed with a gun at the time of his arrest, police said, adding that he is not legally permitted to possess a firearm.

In a post on the department’s Crimewatch page, authorities said Shoemaker was being questioned in a police car about a domestic disturbance in which he was allegedly involved nearby, in the 1400 block of Willowbrook Drive, when he allegedly removed a gun he was carrying in the area of his back and threw it on the passenger side of the vehicle.

When police subsequently tried to take him into custody they said Shoemaker struggled and attempted to take the Taser from the officer’s holster, inflicting minor injuries on the officer which did not require medical treatment.

Police said they later learned that a juvenile was injured by Shoemaker in the alleged domestic incident “and that Mr. Shoemaker had been waving the weapon around prior to police arrival.”

After being taken into custody, Shoemaker was arraigned before District Judge John Capobianco, who committed him to Northampton County Prison in lieu of $100,000 straight bail, according to online court records.

According to court records, a preliminary hearing in his case is scheduled to be held Oct. 3 at 9 a.m. before District Judge Alan Mege at Northampton County District Court 03-2-04 in Lower Saucon Township.