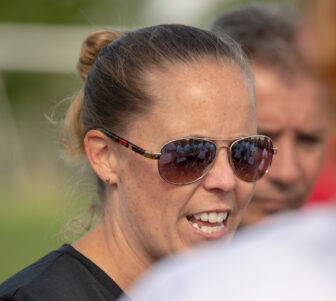 Exacting Panther Pressure, Saucon Valley’s junior center midfielder Sophia Riehl struck with a goal in the first few minutes of the game, which made the score 1-0 Panthers at half-time.

Then immediately into the second half, the Spartans bolted into Panther territory firing a threatening shot, shielded by junior keeper Jackie Barbera. In response, with 29:27 left to play, Riehl pulled the trigger and found the net again as the Panthers marched ahead by 2. Barbera and the battling Saucon Valley defense, led by seniors Lexi Guerrieri and Rachel Starr and flanked by sophomore Ava Albano and freshman stopper Camryn Gonsalves, pitched another shutout for a final score of 2-0.

“It was fun to play a team we haven’t competed against in years. They were physical and aggressive but we controlled the play most of the game. We need to work on capitalizing on the plethora of scoring opportunities we had. If we can do that we could become really dangerous in future games,” commented Coach Stevie Ochse on the match-up.

The Panthers play rival Southern Lehigh on the road on Saturday, Sept. 21. Junior Varsity is scheduled for 11:30 a.m. and varsity at 1 p.m.