A 23-year-old Richlandtown, Bucks County man has been charged with stealing a safe filled with cash from a restaurant on Rt. 309 in Center Valley.

Casey George Rowedder, of Cherry Street, was staying at the Knights Inn near Diana’s Cafe Oct. 4 when he allegedly broke in through a rear window and made off with employee paychecks, the eatery’s cash drawer and a safe that contained about $675, according to authorities cited in a WFMZ story. 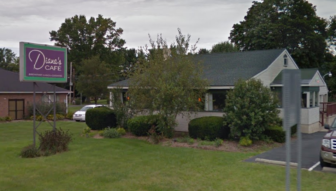 Diana’s Cafe is a well-known restaurant located at 4907 Rt. 309 in Upper Saucon Township. The Knights Inn is located on the opposite side of Rt. 309.

According to the article, the safe and cash drawer were later found in a maintenance closet at the motel.

Following a preliminary hearing before Judge Michael Pochron Friday, he was committed to Lehigh County Prison in lieu of $50,000 straight bail, which as of Wednesday had not been posted, per court records.

A preliminary hearing in his case is scheduled to be held Oct. 11 at 1:30 p.m. in Pochron’s court, according to records.