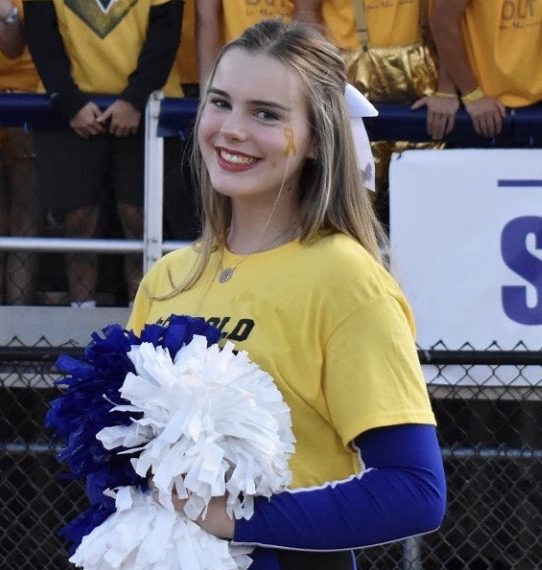 Jaime Peterson smiles as she cheers for Southern Lehigh High Schools varsity game day team. Although she is always happy to cheer for the Spartans, Petersons true passion is competition cheerleading, which she was afraid she would be unable to resume after suffering a devastating back injury in 2017.

A painful back injury and the rehabilitation needed to recover from it might scare you or me into keeping both feet firmly planted on the ground as much as possible. That hasn’t been the case for Southern Lehigh junior cheerleader Jaime Peterson, who has set her sights on greater goals since she suffered a fractured vertebra that severely sidelined her nearly two years ago.

Both a game day and a competitive cheerleader, Peterson was tumbling toward high school success the summer before her freshman year when she developed a nagging pain on the right side of her lower back.

With the pain becoming persistent, she headed to a doctor of sports medicine, who she said diagnosed inflammation and ordered her to ice the area.

“It kept hurting,” Peterson recalled, and the pain quickly began to affect her performance. Her father, Phil, added that they subsequently learned that chronic back pain in someone as young as Jaime was at the time is highly abnormal, and often a sign of a serious injury.

Peterson had to wear a hard plastic brace that kept her torso in a rigid position from her sternum to her coccyx bone; something she recalled made her feel self-conscious–and like a robot–because she couldn’t move freely the way a teenager normally would.

Since she wore clothes on top of the brace many of her classmates didn’t know about her injury, but her fellow cheerleaders did, and Peterson stayed close to them during her recovery in spite of the fact that she was unable to compete for most of that season.

That made traveling with the team to their competitions and watching them perform stunts from the sidelines all the more difficult, but she was determined to be there because she wanted to “contribute…my enthusiasm.”

“I thought I wasn’t going to be able to do competitive cheer again,” Peterson remembered, explaining that it’s a much more athletic form of cheerleading than game day cheerleading, which is the type most people think of first.

Having first fallen in love with the sport as a grade-schooler who cheered with the Saucon Valley Youth Sports Association, however, there was too much passion for it still inside her to walk away from it all.

After wearing the hard plastic brace for three months, Peterson was finally able to shed it, but she still had to complete a rigorous six-week physical therapy regimen at St. Luke’s Physical Therapy in Center Valley in order to return to competitive cheerleading. And even then, she was not allowed to tumble anymore.

Today, she knows her limits and maintains strength with exercises that target her core.

“If anything hurts, I stop,” she said.

Peterson also firmly believes that recovering from her injury has ultimately made her not only a better cheerleader, but also a better teammate and captain to the comp team.

“It taught me a big lesson in life,” she said. “Sometimes things happen and you have to push on.”

She also credited her cheerleading coach at Southern Lehigh, Michelle Riley, with supporting her every step of the way throughout her journey toward healing.

For her part, Riley made an unusual decision in order to recognize her young athlete’s tremendous courage in making a full recovery and returning to cheerleading: she named her the team’s MVP in her sophomore year.

“She deserved Most Valuable Player,” Riley said, noting that the designation is normally reserved for a senior team member. “She is the type of athlete that if somebody needs help with something she steps in. She’s not forceful about it. The way she approaches it is very positive. She’s always looking at ways to bring up the team.”

“If you’re not working together as a team, especially in cheerleading, then you have nothing,” added Peterson.

Beyond Southern Lehigh High School, she said she hopes to continue to cheer while studying speech language pathology in college.

In the meantime, you can catch her and the rest of the Southern Lehigh comp team in their first competition of the season at Wilson Area High School on Saturday, Nov. 3. You might also see her around Saucon Valley, where her father lives and where she maintains close ties.

What would Peterson say to another athlete who’s facing a seemingly insurmountable hurdle due to an injury?

“Just because you have an injury, there are ways to come back from it,” she said simply.

Editor’s Note: Do you have a Southen Lehigh news tip or story idea? Are you interested in covering/sharing Southern Lehigh area news? We want to talk to you. Please email josh@sauconsouce.com for more information.