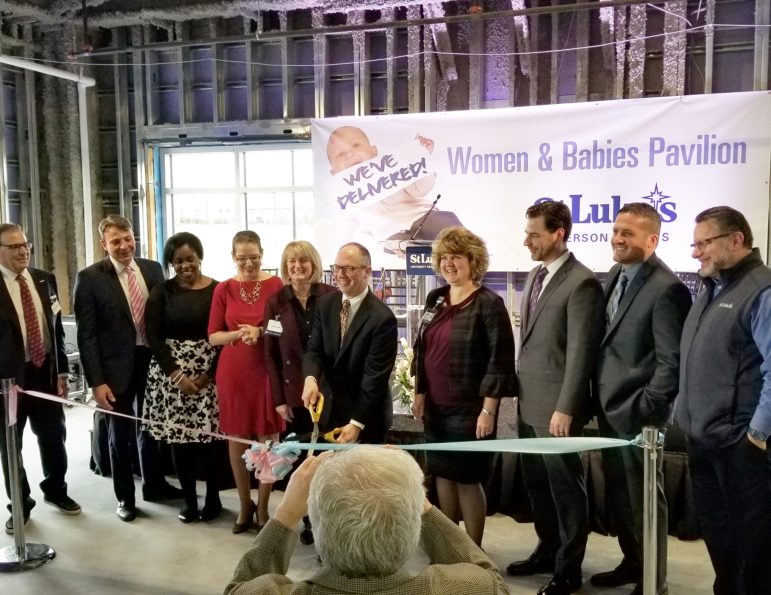 A ribbon-cutting ceremony and reception were held for the 180,000 square-foot Women & Babies Pavilion, which doubles the size of the Anderson Campus with its opening.

Future births at the Anderson Campus will build upon and strengthen a legacy of caring for new life which Nawrocki said is symbolized by the fact that more than half of the Lehigh Valley’s nearly 800,000 current residents were born in a St. Luke’s hospital. 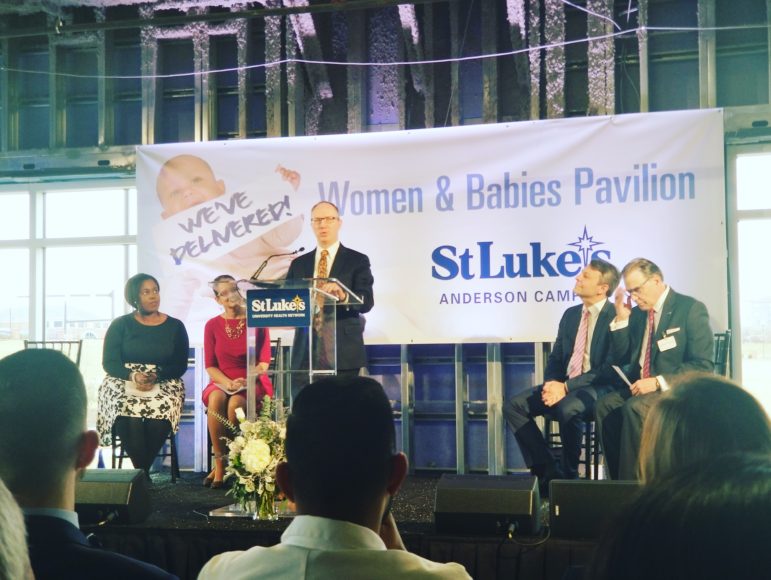 St. Luke’s Anderson Campus president Ed Nawrocki welcomes attendees to the hospital’s ribbon-cutting ceremony for its Women & Babies Pavilion, which is about to begin welcoming the area’s newest residents into the world. Nawrocki said the room in which the event was held has been designated for use as part of a future Emergency Room expansion at Anderson.

The four-story Women & Babies Pavilion is the third St. Luke’s birthing center in the Lehigh Valley, and joins the ranks of labor and delivery units at St. Luke’s hospitals in Bethlehem and Allentown.

The Women & Babies Pavilion also goes above and beyond the physical requirements of a modern labor and delivery unit by featuring family-friendly spaces designed for comfort, convenience and to help nurture the bond between new moms, babies and families. 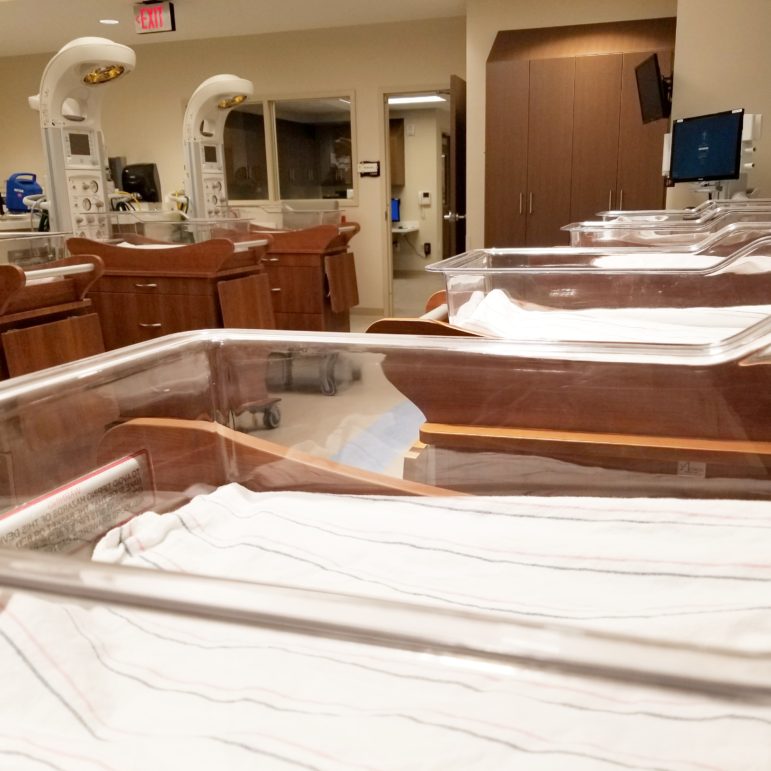 Bassinets that will soon be filled with newborn babies fill the nursery on the third floor of the new Women & Babies Pavilion at St. Luke’s Anderson Campus in Bethlehem Township.

Hospital officials said the design is reflective of St. Luke’s Baby & Me Philosophy, which fosters the postnatal bond while providing families with high quality, personalized care.

St. Luke’s adherence to the Baby & Me Philosophy means a commitment to the use of evidence-based practices such as skin-to-skin contact between parents and their newborns and “rooming in,” said Israel Zighelboim, MD, FACOG, FACS, who chairs the Department of Obstetrics and Gynecology at St. Luke’s University Health Network.

“St. Luke’s OB/GYNs and staff understand that pregnancy is a very special time for mothers and the entire family, so from start to finish, the Women & Babies Pavilion was designed with their entire experience in mind,” he said. “The concept is to incorporate not just the new baby, but the new family that is ‘born’ when a baby arrives.”

With spacious private rooms, spa-like amenities such as rain showerheads and decor inspired by nature, Nawrocki said so far “the patient feedback is that it feels like a hotel and they won’t want to leave.”

St. Luke’s President and Chief Executive Officer Richard Anderson said that while comfort and modern convenience are clearly important, it is ultimately the staff who make the health network what it is. 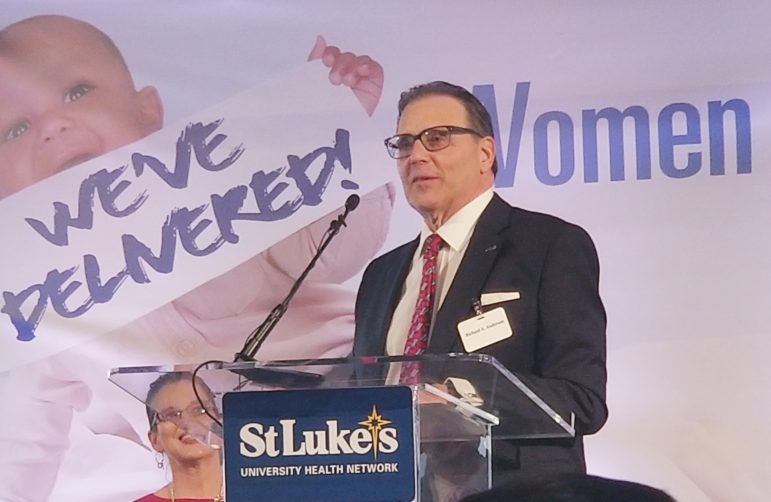 “I always say the secret sauce is the people who work here,” he told an audience of several hundred people, adding “all of you in our community can help us make this better than it is today.”

The new pavilion will also be home to education space–including a simulation center and auditorium–for multiple graduate medical education programs at Anderson Campus.

That expansion will nearly double the number of residents and fellows trained at St. Luke’s to more than 430, making it the largest program in the Lehigh Valley.

With existing educational programs throughout its Network, St. Luke’s has announced that it plans to add 160 new residents over a five-year period in specialties like neurology, psychiatry, dermatology, endocrinology, emergency medicine, otolaryngology (ENT), internal medicine and family medicine.

“This expansion at the Anderson Campus not only underscores St. Luke’s commitment to mothers, babies and families, but also to training the next generation of health care providers to care for them,” said J.P. Orlando, Ed.D, St. Luke’s Chief Graduate Medical Education Officer. “We look forward to expanding our offerings to Anderson Campus, which will allow us to train even more future physicians, particularly in high-demand specialties like psychiatry and dermatology.”

The Anderson Campus, which opened nearly a decade ago, is one of 11 hospitals throughout eastern Pennsylvania that are part of St. Luke’s University Health Network. 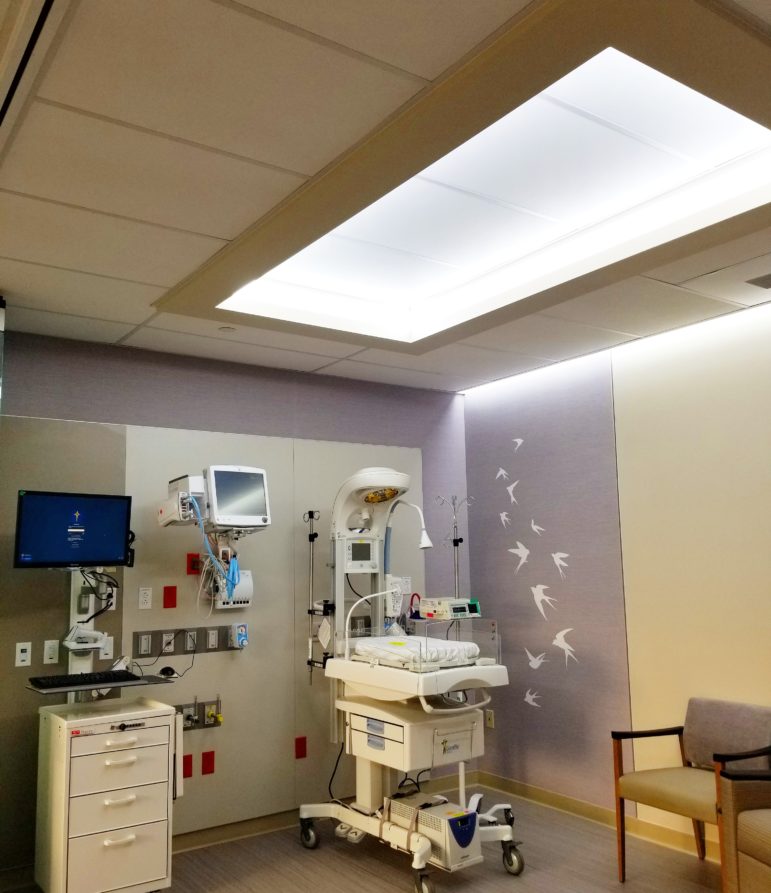 The new Women & Babies Pavilion at St. Luke’s Anderson Campus was designed with comfort, convenience and family bonding in mind. Design elements that incorporate nature were selected, as evidenced by the wall art in this NICU room. 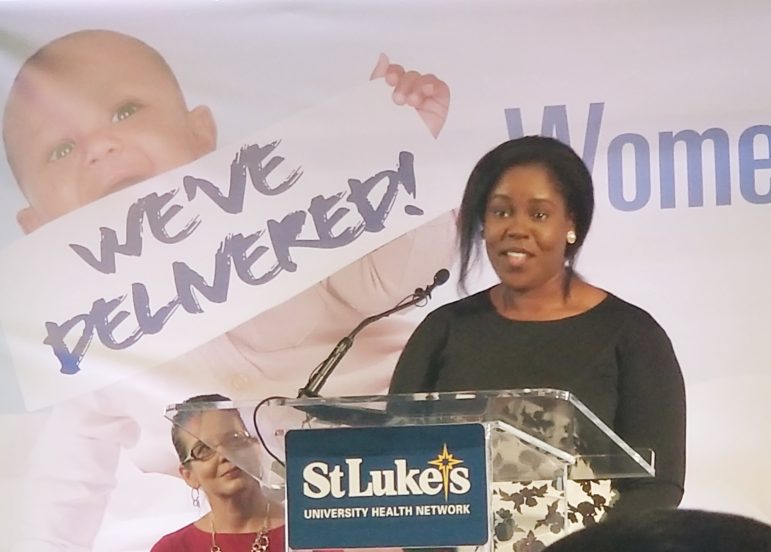 Family Medicine resident Ifunanya Akusoba, MD, speaks at the ribbon-cutting ceremony for the new Women & Babies Pavilion. Akusoba, who said she comes from a family of medical professionals, said she is happy to be learning about lifestyle medicine at St. Luke’s. “It’s my privilege to take care of all these patients,” she told attendees. 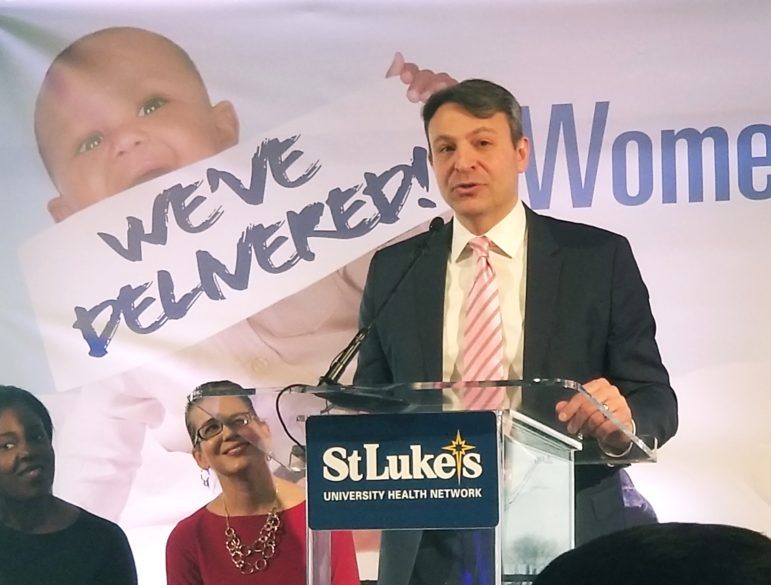 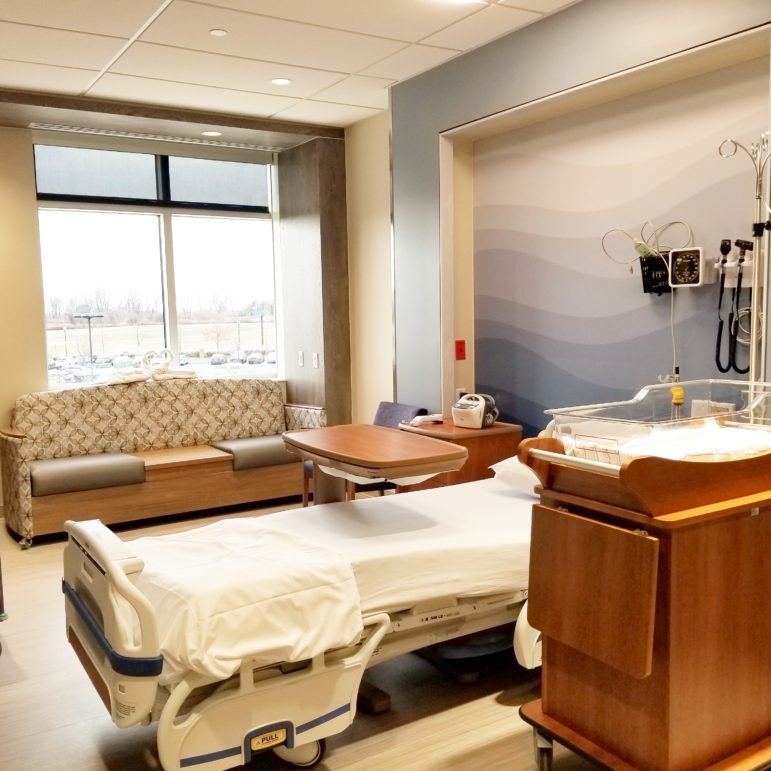 A postpartum room on the third floor of the new Women & Babies Pavilion at St. Luke’s Anderson Campus. 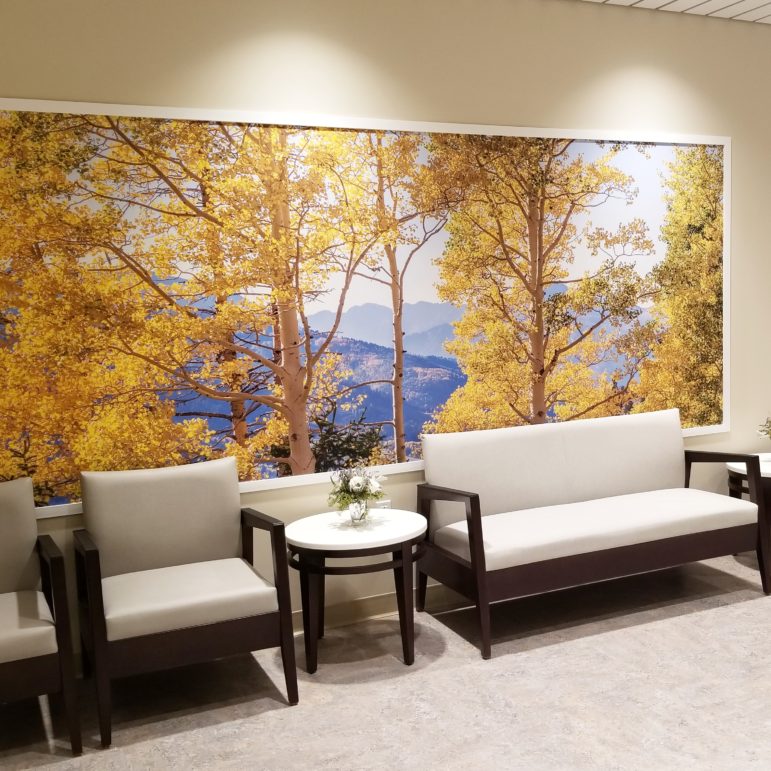 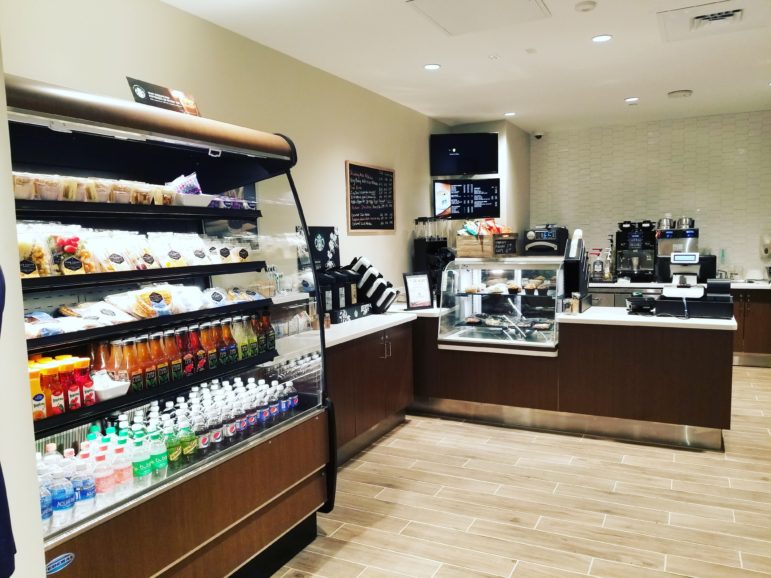 For those in need of coffee or a snack there is a Starbucks kiosk on the first floor of the new Women & Babies Pavilion at St. Luke’s Anderson Campus in Bethlehem Township. 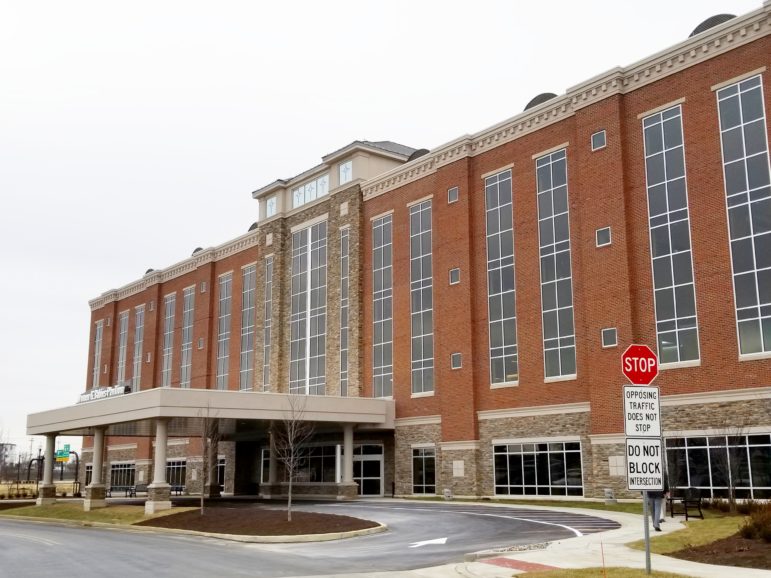 The new Women & Babies Pavilion at St. Luke’s Anderson Campus took about 18 months and cost $75 million to construct. The four-story, 180,000 square-foot building is the health network’s third labor and delivery unit, after Bethlehem and Allentown. 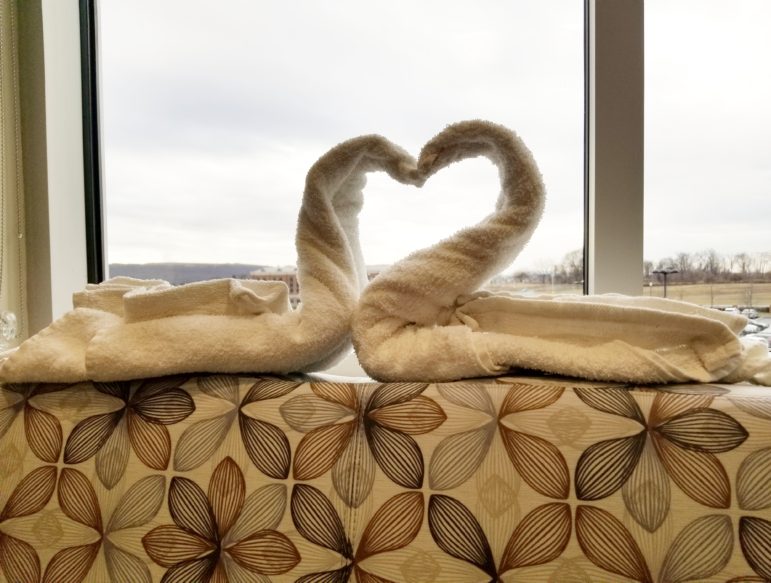 Fresh towels folded to resemble two swans kissing give a patient room in the new Women & Babies Pavilion a decidedly ‘spa-like’ feel, which Anderson Campus president Ed Nawrocki said is something patients have been positive about.