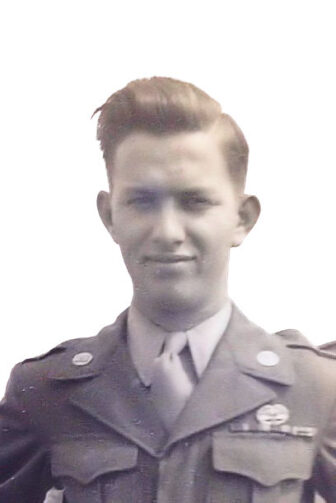 He was the husband of Martha B. (Brader) Kemmerer. Arland was born in Hellertown on Nov. 29, 1924 to the late Charles S. and Emily (Laubach) Kemmerer. He served our country faithfully in the U.S. Army as a combat medic during World War II in the European Theater. He was awarded five campaign stars including one for the Battle of the Bulge and was also awarded a Bronze Star. Arland worked as a conductor for Conrail in Philadelphia for 41 years until retiring. He also worked for 15 years at the former Carson’s Hardware, Hellertown. He was a member of First United Church of Christ, Edward H. Ackerman American Legion Post 397 and VFW Post 3094, all in Hellertown, and the Coplay Saengerbund.

In addition to his loving wife of 72 years last November; sons: David L. (Sandra) of Mountain Top, Kim B. (Kathryn) of Bluffton, S.C.; siblings: Lloyd A. of Bethlehem, Verda I. Zaparzony of Bethlehem, Gloria Eisenhart of Hellertown, Marlene M. Groff of Bethlehem, Lois Brown of Bethlehem; three grandchildren. He was predeceased by siblings: Henry, Richard and Carl Kemmerer, Carolyn Bachman.

The service will be held privately. There will be no calling hours. Online expressions of sympathy can be recorded at HeintzelmanCares.com. Arrangements are by the Heintzelman Funeral Home Inc., Hellertown.

In lieu of flowers, memorials may be made to Meadow Glen at Phoebe Richland, 108 S. Main St., Richlandtown, PA 18955.