Spotlight PA is an independent, non-partisan newsroom powered by The Philadelphia Inquirer in partnership with PennLive/The Patriot-News, Triblive/Pittsburgh Tribune-Review and WITF Public Media. Sign up for our free weekly newsletter. 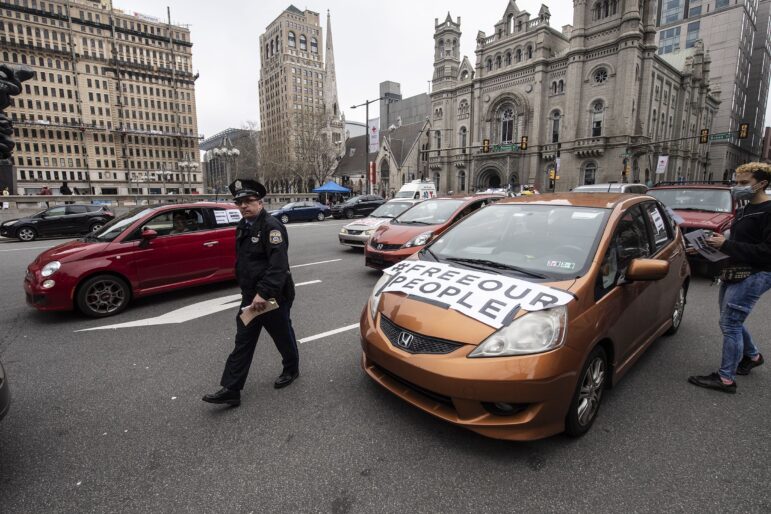 Advocates say Pennsylvania’s prisons and jails need to release more inmates to ensure proper social distancing and help prevent the spread of COVID-19. Protesters rallied in Philadelphia in April to make that demand.

HARRISBURG — A state task force is calling on the legislature to give corrections and parole officials greater flexibility to release incarcerated people during declared disasters like the coronavirus pandemic.

The recommendation, part of a broader report on COVID-19′s disproportionate effect on communities of color, addresses a temporary reprieve program established by Gov. Tom Wolf that has released under 200 state inmates–a fraction of what advocates say is needed.

“Though well-intentioned,” the report states, “many within the social justice and medical communities have noted that eligibility requirements for the program were too stringent and did not provide … officials with much discretion to grant relief to inmates exhibiting a true medical necessity.”

Still, advocates say the task force largely failed to tackle the real-time challenges faced by people who are incarcerated inside Pennsylvania’s prisons and jails–a group that is overwhelmingly people of color, and particularly at risk because of their close quarters.

Wolf tapped Lt. Gov. John Fetterman to lead the group in April after reports across the nation showed Black and brown communities were disproportionately affected by the virus, both in hospital settings as well as economically. In Pennsylvania, 21 percent of people who have died from COVID-19 are Black, while Black people make up just 12 percent of the state’s population.

That same month, Wolf established a temporary reprieve program for certain non-violent inmates aimed at reducing the prison population to avoid potentially deadly outbreaks. At the moment, however, the state is reporting just 132 current releases through reprieves, even though the state’s prisons remain under modified lockdowns that don’t allow for in-person visitation.

Overall, the state corrections department was able to reduce its prison population by more than 3,400 inmates between March and late June, in part, by expediting the parole and release processes in certain cases.

Advocates for incarcerated people and community leaders hoped the task force would address ongoing issues that have been well-reported inside corrections facilities, such as the lack of masks or cleaning supplies, poor social distancing due to overcrowding, limited access to quality health care and an absence of widespread testing.

“These proposals are not the primary issues to deal with if you want to address racial disparities and the spread of COVID in Pennsylvania’s criminal justice system,” said Claire Shubik-Richards, director of the Pennsylvania Prison Society, the state’s unofficial ombudsman for prisoners and their families.

Prisons and jails continue to be hotspots for the virus’ spread. The Lancaster County Prison has experienced a recent surge in cases, while Dauphin County Prison’s case count nearly doubled at the beginning of July.

Inside the state’s prisons, hundreds of inmates and staff have tested positive for COVID-19, and 11 incarcerated people have died. The state corrections and health departments are not tracking infections inside these facilities by race.

Shubik-Richards said the Pa. Prison Society was not consulted by the task force. If it had been, she said she would have pointed to a need for more testing of inmates when an incarcerated person or staff member tests positive.

A Centers for Disease Control and Prevention analysis released this month showed that prisons and jails that conducted mass testing found 12 times as many cases compared to those that did only symptomatic-based tests. The report recommended facilities conduct tests of asymptomatic inmates as well as reduce jailed populations to keep the virus from spreading.

Despite those recommendations, which have also been repeated for months by prisoners’ rights groups, the Department of Corrections has been hesitant to pursue mass testing. With a current population of more than 40,000 inmates, the department has administered 11,000 tests statewide.

Only a handful of counties have done mass testing of their inmates, including Dauphin, Fayette and Montgomery.

Board of Pardons Secretary Brandon Flood, who helped author the section on criminal justice, said the Department of Corrections was involved in the report, while county jails did not participate in the task force’s meetings or calls, despite the efforts of the County Commissioners Association of Pennsylvania to get them involved.

Ken Kroski, director of media relations for the association, said counties were overburdened at the time of Flood’s request attempting to manage their jail populations. He said the lack of participation “should not be interpreted as avoiding a focus on the disparate impact of COVID-19 on minority populations.”

Flood said that the measures included in the equity report are ones that could have a significant effect on people of color who have been involved in the criminal justice system. He pointed to a proposal that calls on the legislature to make retroactive a law that allowed people who committed offenses that didn’t involve a vehicle to keep their driver’s licenses.

“It’s important to be able to have your own vehicle to go to some of the testing sites that may be out of the way, out of a mass transit route, going to a physician if you have symptoms,” he said.

But with efforts to release vulnerable inmates coming up short, the report should have included–at a minimum–a proposal to significantly reduce the incarcerated population now, said Bret Grote, legal director of the Abolitionist Law Center in Pittsburgh: “Jails and prisons do not permit social distancing.”