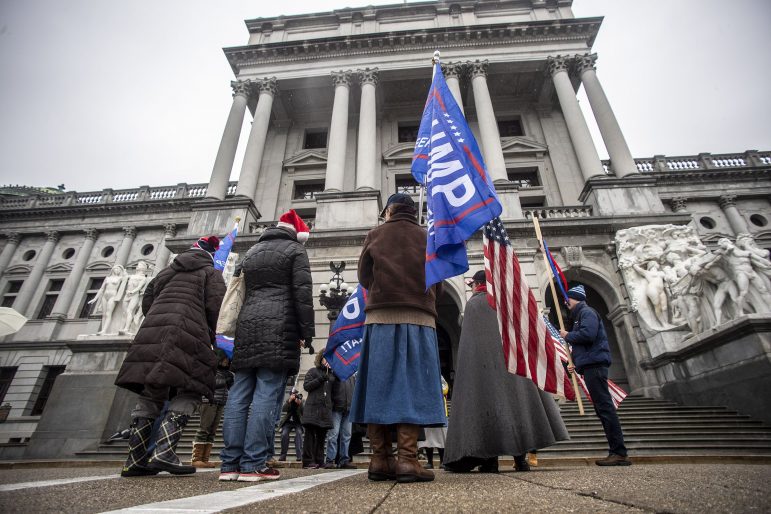 Trump supporters protested outside the Pennsylvania State Capitol on Monday, Dec. 14, as the state’s 20 Electoral College votes were certified for Joe Biden. Following the deadly insurrection at the U.S. Capitol on Jan. 6, and due to anticipated marches involving right-wing extremists in all 50 state capitols, security is being increased in Harrisburg. (FILE PHOTO)

The pro-Trump insurrection that resulted in death and mayhem at Capitol Hill and led to the president’s impeachment Wednesday is having a ripple effect in the nation’s 50 state capitals, which are responding to a heightened domestic terror threat in the days ahead.

Concerns about security at the Pennsylvania State Capitol complex in Harrisburg were the subject of an online press conference with state and local law enforcement officials Thursday.

Pennsylvania Capitol Police Superintendent Joe Jacob said the force he oversees is prepared to take appropriate action to prevent a repeat of the Washington, D.C., attack in this state.

In light of the possibility of civil unrest, Jacob said Pennsylvania Capitol Police have already been proactive.

“We have increased our visibility, with members of our special response team now patroling the Capitol grounds in their full SRT gear,” he said. “They have trained with the FBI and are a key part of our operations under circumstances like the ones we have the potential to face over the next week.”

As intelligence about the potential for protesters to descend on the state capitol is developed, Jacob said certain roads through the Capitol complex will be closed. He added there are plans to activate approximately 400 Pennsylvania National Guard members, some of whom will be deployed to the Capitol, although plans have yet to be finalized.

The Pennsylvania Capitol Police are working closely with Pennsylvania State Police for resource support to coordinate their response to the threat of further violence around the time of Joe Biden’s inauguration Jan. 20, Jacob said.

Lt. Col. Scott Price of the state police called the Jan. 6 insurrection “abhorrent” and noted that his agency is providing support to Capitol Police in the form of aerial observation, mounted units on horseback, a bomb squad, negotiators and with other resources.

“Citizens play a vital role in our efforts to keep the Commonwealth free from harm and serve as a force multiplier as our eyes and ears in the community,” he said.

Price noted that the state police’s See Something, Say Something program encourages citizens to be observant and email tips concerning suspicious activity to law enforcement at tips@pa.gov or download a tips app that is available for both Android and iPhone.

Harrisburg Police Chief Thomas Carter said his department will be on heightened alert throughout the upcoming period.

Carter noted that peaceful protesters are welcome in the city.

“We understand that everybody has grievances, (but) there’s a way to put those grievances out there,” he said. “We all want to go home safe. We all want to protect life, liberty and the pursuit of happiness.”