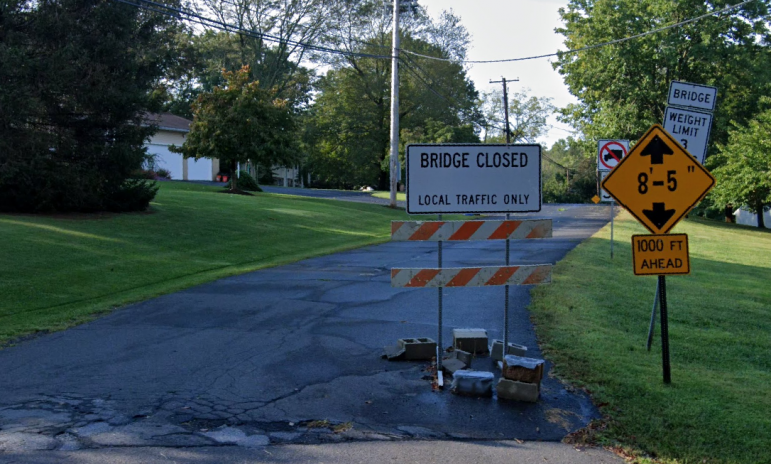 With the bridge over the Unami Creek closed, there is limited traffic on the section of Nursery Road where state police say the rear window of a car was shot out over the weekend. The incident occurred in a rural section of Milford Township, about a mile southwest of Trumbauersville, near where the Pennsylvania Turnpike’s Northeast Extension cuts through the area.

Pennsylvania State Police at Dublin Monday announced their investigation into a disturbing incident in Upper Bucks County in which the rear window of a man’s vehicle was apparently shot out while he was driving it.

According to a news release, the incident happened around 3 p.m. Saturday, as a 46-year-old Perkasie man was driving in the 1300 block of Nursery Lane in Milford Township.

As the man was pulling away “near the closed bridge” police said “he heard a ‘pop’ sound and the rear window of his 2006 Mazda shattered.”

Before this happened, police said the man reported seeing two male juveniles on the bridge, one of whom “had an unknown-type pistol and was shooting it in the creek.”

Police said one of the boys was also carrying a black backpack.

Anyone with information related to this incident is asked to contact state police at Dublin and reference the following incident number: PA2021-479862.

The incident took place near where Nursery Road spans the Unami Creek, about a quarter of a mile west of the Northeast Extension of the Pennsylvania Turnpike in a rural section of the township.