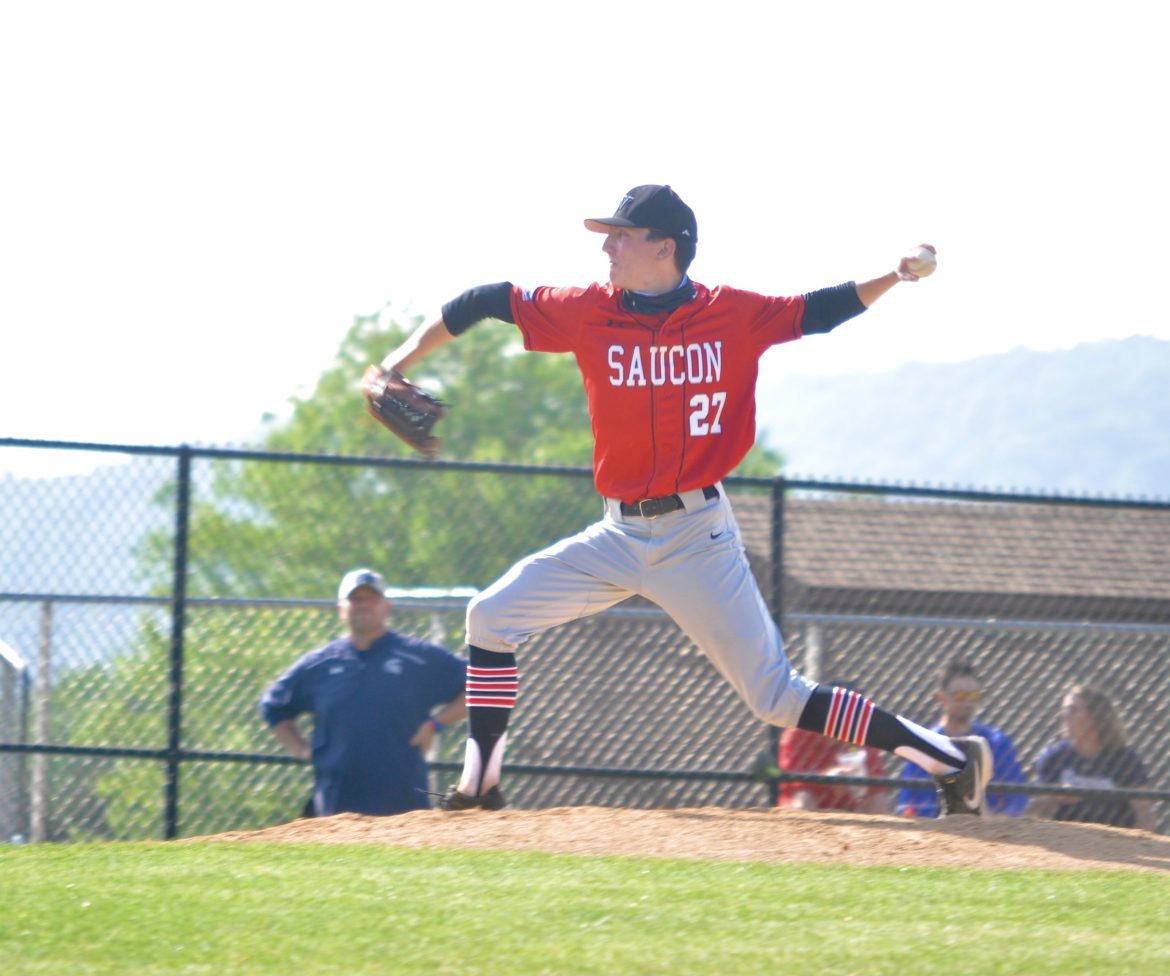 Senior Chris Medei was outstanding on the mound for the Panthers against North Schuylkill in the 2021 District XI playoffs.

Last Tuesday, the Saucon Valley high school baseball team hosted the North Schuylkill Spartans in the opening round of the 2021 District XI championships.  The Panthers entered the tournament as the #3 seed with the Spartans as #6.

It didn’t take long for the contest to heat up as the the game started with a little controversy. The Spartans’ leadoff hitter pasted a low-liner down the third baseline.  It seemed the third-base umpire pointed as though the ball was foul, but aside from some loyal Panther fans voicing their displeasure and confusion from the left field seats, play continued with the North Schuylkill batter coasting into second base with a standup double.  The next North Schuylkill batter knocked the run in to take a 1-0 lead before Panther starting pitcher Chris Medei sat down three straight. 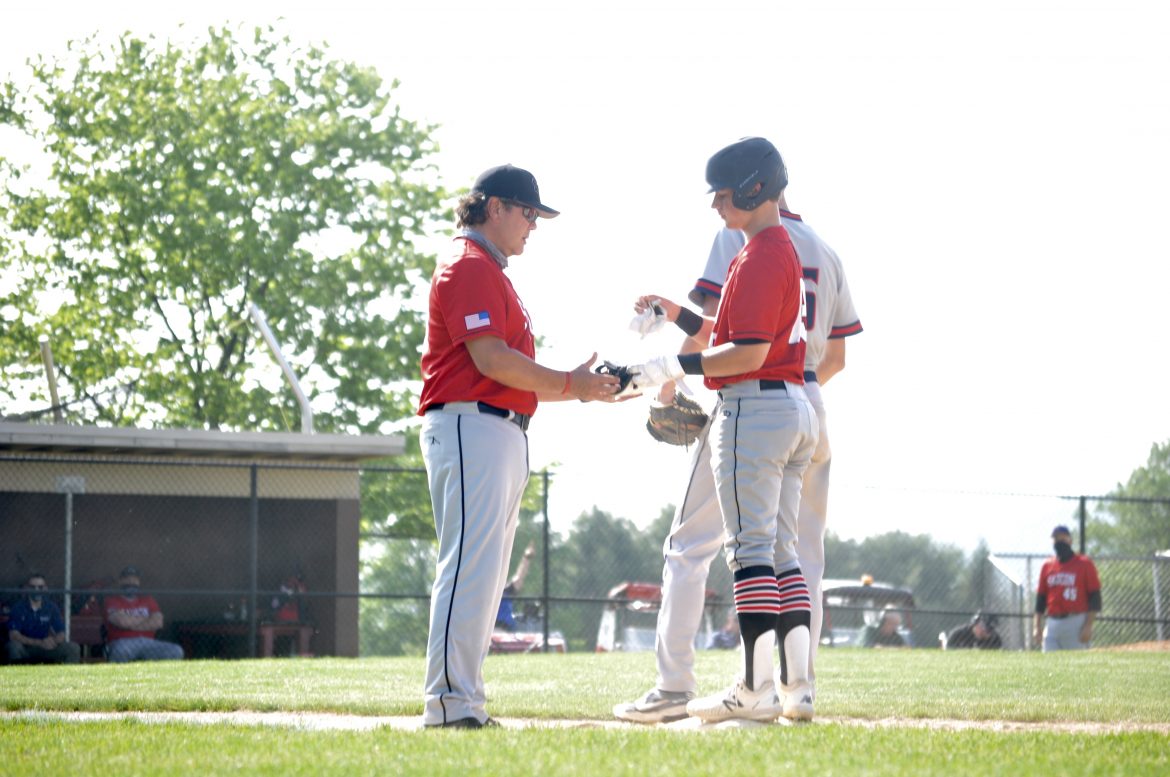 Saucon sophomore Ronnie Werkheiser found himself safely on base.

The Panthers did get the run back in the bottom half of the inning with a pair of doubles.  Sophomore DH, Ronnie Werkheiser led off with a sharply hit ball to right-centerfield.  Senior Austin Strunk then followed Werkheiser’s lead with a double down the left-field line for an RBI.  At the end of the first inning, the score was tied-up, 1-1. 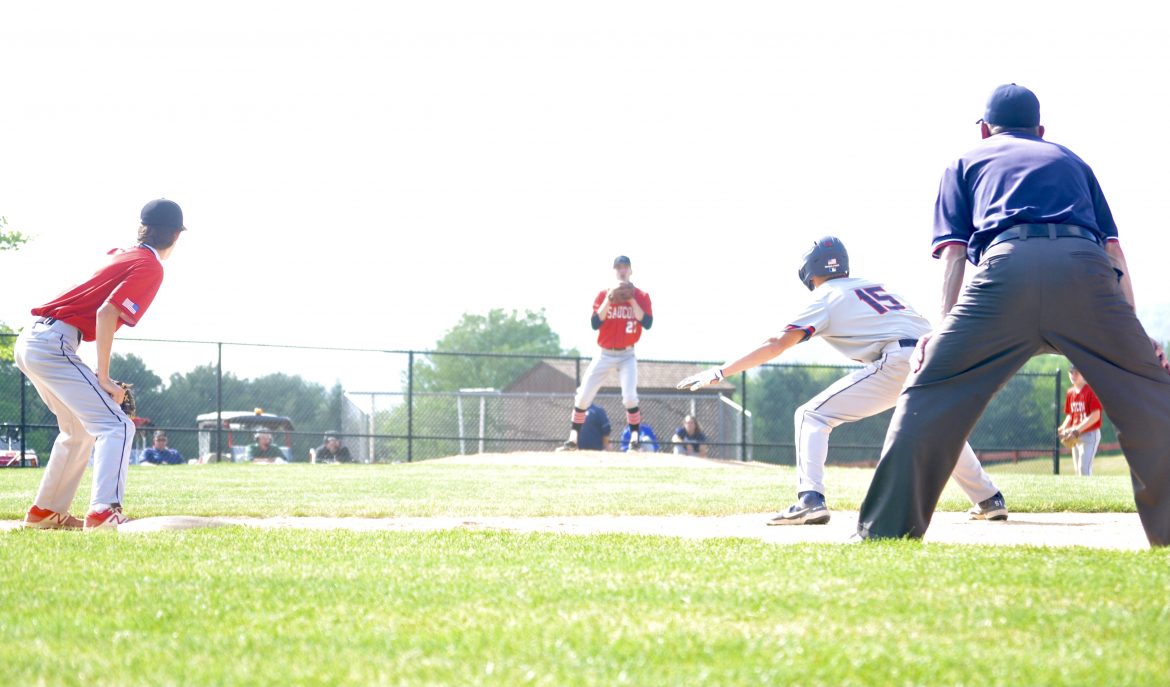 The game proved to be a pitchers duel, but more controversy followed in the top of the fifth inning.  Panther pitcher, Chris Medei caught a Spartan baserunner leaning and seemingly had him picked off first base.  A run-down ensued as the Panthers had the Spartan trapped between first and second base.  When Panther sophomore shortstop Liam Buck lunged to tag the runner near first base, it appeared the runner spun out of the baseline to avoid Buck’s effort and was able to scamper safely back to first base.  The Panther faithful unsuccessfully argued that the runner left the baseline and should be out.  However, the umpires did not change their initial call.  Two batters later that Spartan baserunner scored on a line shot to left-centerfield.  Medei did pitch his way out of any more trouble, but the damage was done. 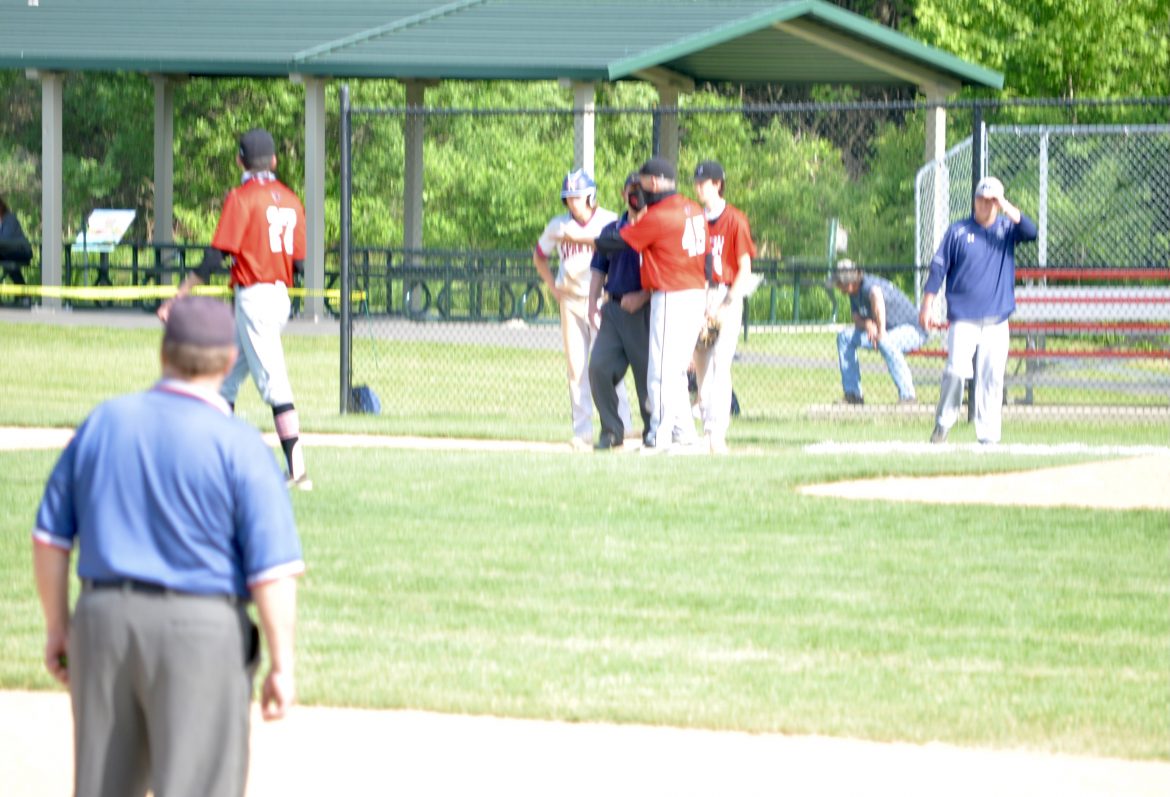 Panther skipper Gary Laub looking for clarification from the umpires in the 2021 District XI playoffs.

North Schuylkill carried their 2-1 lead into the seventh inning.  Saucon sophomore Rocky Viscito, who relieved Medei from his pitching duties in the sixth inning, was able to strike out the Spartan leadoff hitter.  Viscito, however,  gave up three consecutive hits before pitching his way out of the inning.  Those three hits contributed to a Spartan 3-1 lead. 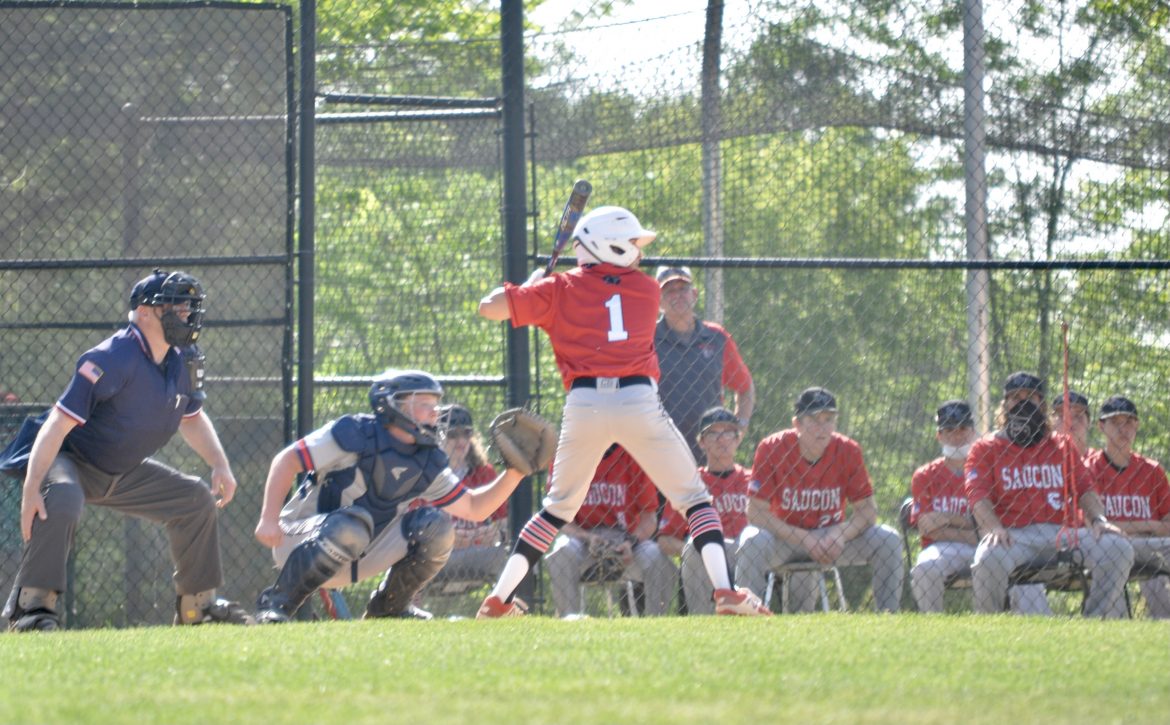 Saucon Valley’s Rocky Viscito at bat during crunch time for the Panthers.

With one out in the bottom of the seventh inning, Saucon Valley’s Jacob Albert reached base with his line drive into centerfield.  With two out, pinch-hitting senior John Mitchell also reached base. Rocky Viscito stepped to the plate and smacked a sharply hit line drive to right field which scored Albert to make the score 3-2. With runners at the corners and two out, Saucon’s knack for late game heroics would fail. Junior Jake Huber went down swinging and flied-out to end the game.  North Schuylkill advanced in the 2021 District XI playoffs, while the Panther 15-win season came to a close.

” [To end this season] It’s bittersweet.  It was a tough loss, but I could talk all day about this group of young men.  They are one of the best group of athletes that I have ever had the privilege of coaching. These players were ultimate teammates.  They did whatever it took for the team to be successful.  Junior Erik Smith played four different positions for us this year.  Sometimes all in the same game.  He never complained about being called upon to step-up.  The examples of the “Next Man Up” mentality are endless on this team.  There is no quit in these Panthers.  They all love playing the game and don’t like to lose!

Chris Medei:  Chris deserved better for his performance on the mound in the District playoff game.  He really pitched a great game.  Our team rallied once again in the bottom of the seventh to try and get our 6th walk-off victory of the season.  But, we came up just short.  Chris was a “Rock” this season.  He was our only senior starting pitcher and batted .411 during the regular season.

John Mitchell:  He’s “Captain Clutch”.  Whenever we needed a base hit, speed on the bases or to get a runner on base, he was always up to the task.  Nothing was bigger than his two-out walk-off single for 2 RBI’s in the bottom of the 7th against Bangor.

Yamil “Milky” Quintana:  You want to talk about a teammate?  We get to the Lehighton game and one of our regular starters realized that he left his cleats in his car.  Milky offers up his cleats to allow our starter to play that day.  We had to do a quick switch later in the game to give Milky an at-bat and he hammered his very first varsity hit and RBI.

Sean Royer:  Sean was a part-time starter throughout the season.  He played a solid 2nd base for us.  He was always ready whenever we needed him.

Austin Strunk:  One of our senior captains.  He plays multiple positions in the infield.  He will be attending Mercer Community College on a baseball scholarship as a middle infielder.  When we found out that our projected catcher was injured, all it took was one phone call to hear him say, “Whatever the team needs coach, I’m in”.  Prior to this season Austin caught a total of two innings during his sophomore year in a scrimmage.  Austin provided the “big bat” we needed this year with some long balls.  He lead the team with 3 HR’s.

I can’t say enough about this selfless bunch of players.  We would never have had the season that we did (15 wins) without them.  However, the future is bright.  We have seven returning starters and some more talented players moving up next year.  It’s definitely an exciting time for Saucon baseball!” 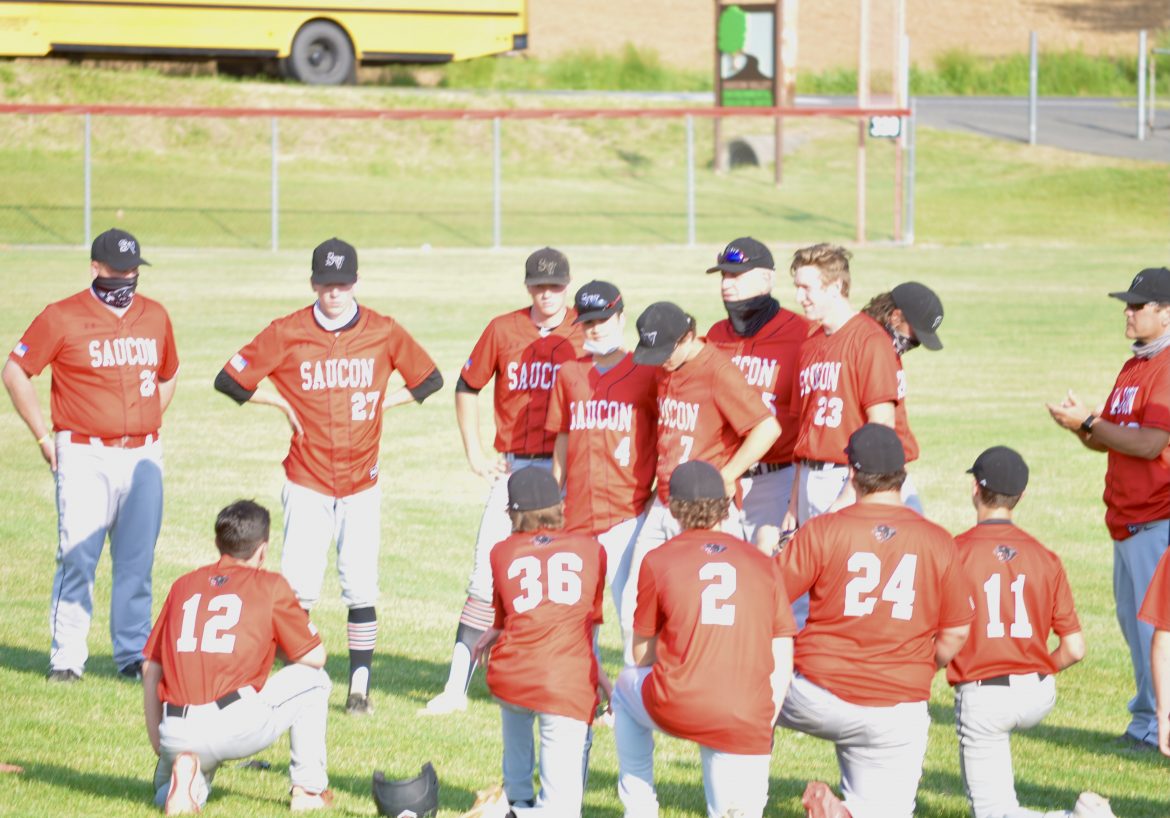 Coach Laub recognizes the 2021 seniors after their final game.