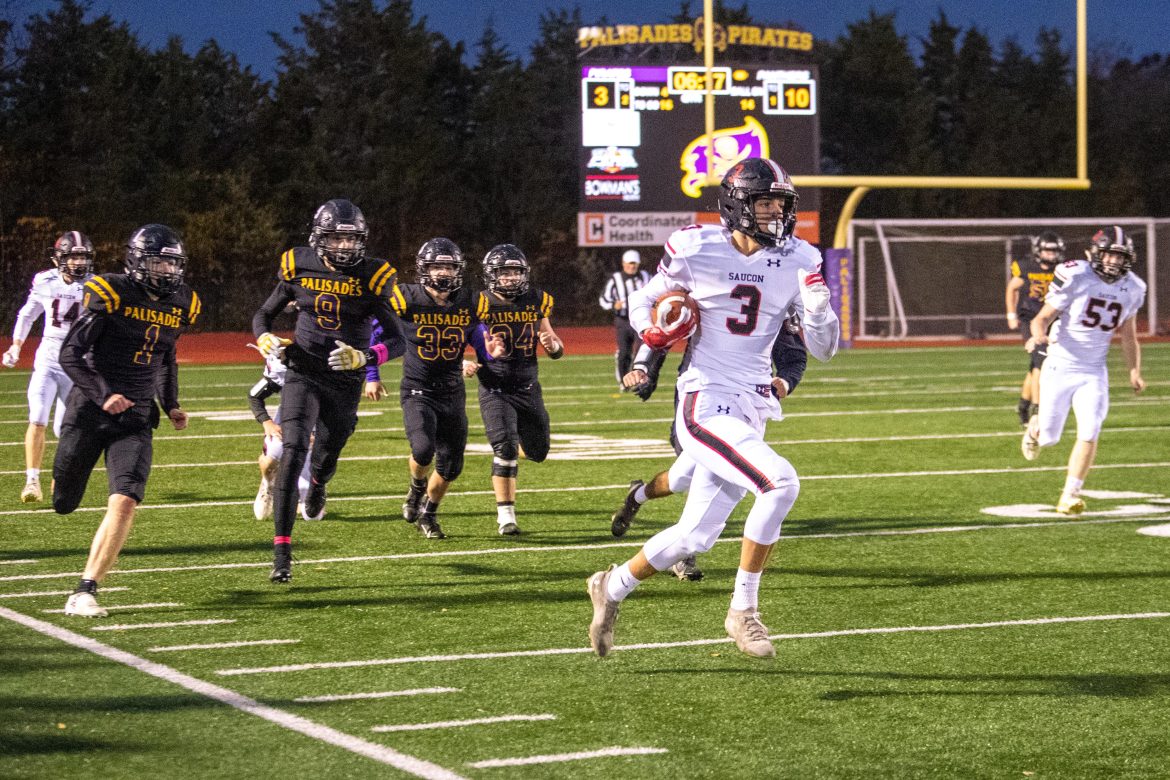 To say that the Panthers and Palisades Pirates played their annual rivalry matchup Friday night in rain and wind is an understatement.  Persistent downpours mixing with sustained and hat-snatching gusts throughout the contest made for a drenching and memorable night.  So, with kickoff bumped up to 5:30 instead of 7 p.m.to try and avoid the storm’s worst, the Panthers were able to jump on top of the Pirates with a quick start and hold on for a water-logged victory. 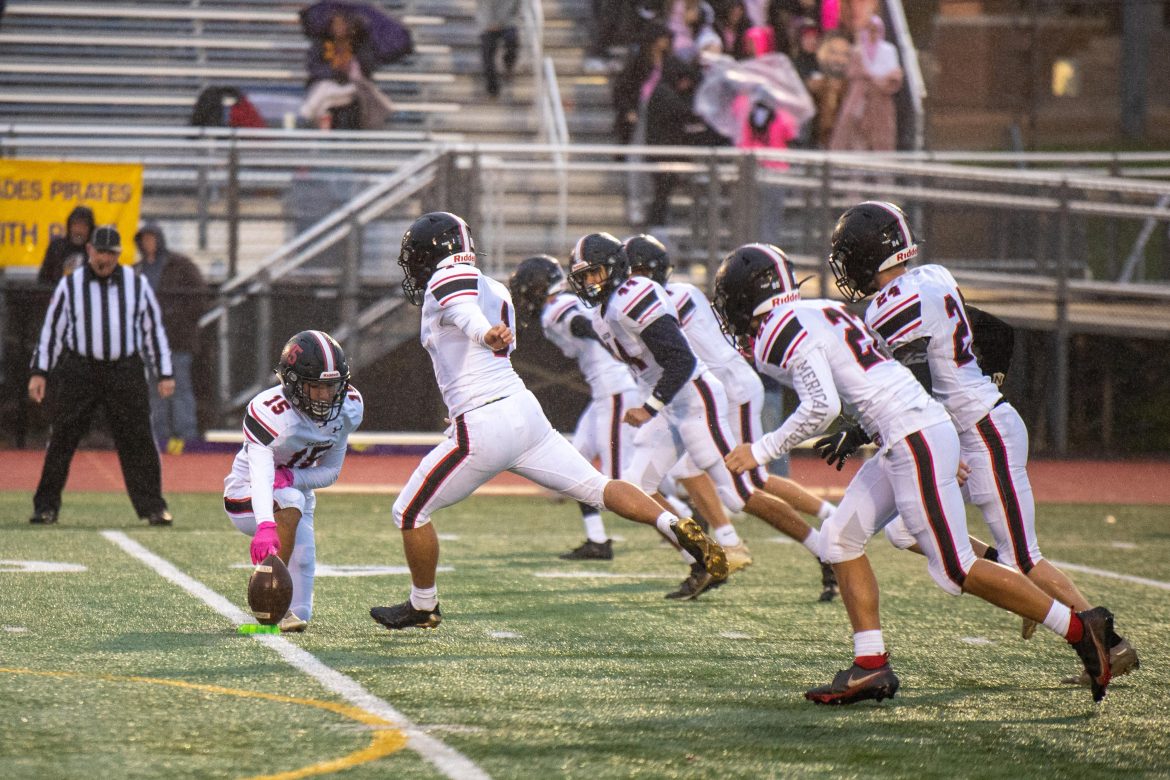 The wind was a big factor Friday night when these rivals squared off.

Palisades won the toss and deferred their option until the second half.  The Panthers took the ball and the Pirates chose to start the game kicking into a stiff wind.  Palisades’ attempt to surprise the Panthers with an onside kick failed giving Saucon Valley their opening possession at midfield.

Following a Damian Garcia 19-yard blast up the gut on the game’s first offensive play, Saucon Skipper Brad Trembler immediately took advantage of the wind and dialed up a little trickery with a reverse-pass.  From the shotgun, Panther quarterback Travis Riefenstahl faked a handoff to Damian Garcia underneath as slot-receiver Ty Csencsits circled behind the play-action.  Riefenstahl wheeled around and handed off to Csencsits who took a few steps to sell the run.  Instead of running however, Csencsits pulled up and fired the ball into the awaiting hands of Alex Magnotta who found space in the Pirate endzone.  Along with Jacob Christopher’s extra-point, the 28-yard touchdown pass gave the Panthers a quick 7-0 lead less than a minute into the game. 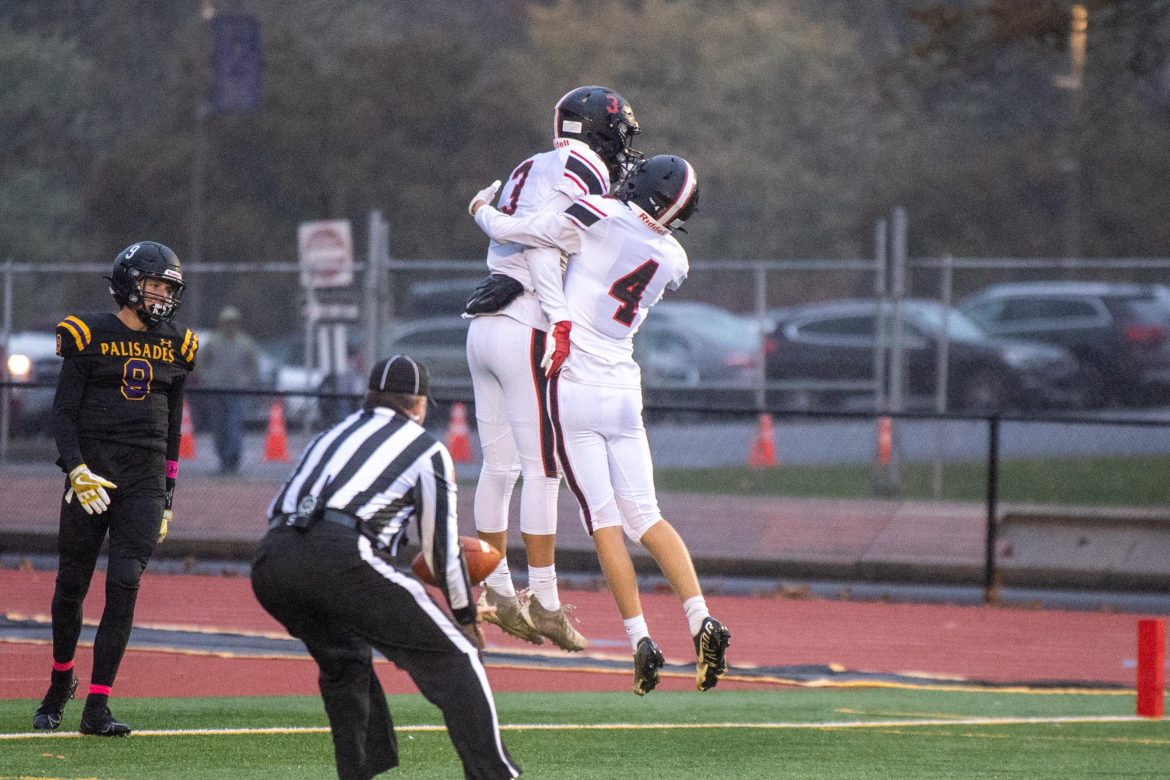 With the wind at his back, Christopher put the following kickoff out of the endzone and somewhere around Lake Nockamixon.  The Palisades offense could not muster any traction going into the teeth of the squall and the Pirates punted back to the Panthers after only three plays.  Saucon took possession in Palisades territory and leaned on Garcia to pound the ball down to the 12-yardline.  It was there the drive stalled as Saucon settled for a Jake Christopher 29-yard field goal.  With 6:02 still left in the opening quarter, the Panthers extended their lead to a 10-0 advantage.

A couple of punts later the game waded into the second quarter and Palisades was on the move.  A pair of Pirate passes from Jade Newton to Kyle McGrath set up a successful, wind-aided 38-yard field goal.  Michael Wallbillich’s boot dodged the raindrops to cut into the Panther lead.  With 8:32 remaining until a little snack-stand-sanctuary, Palisades trailed 10-3. 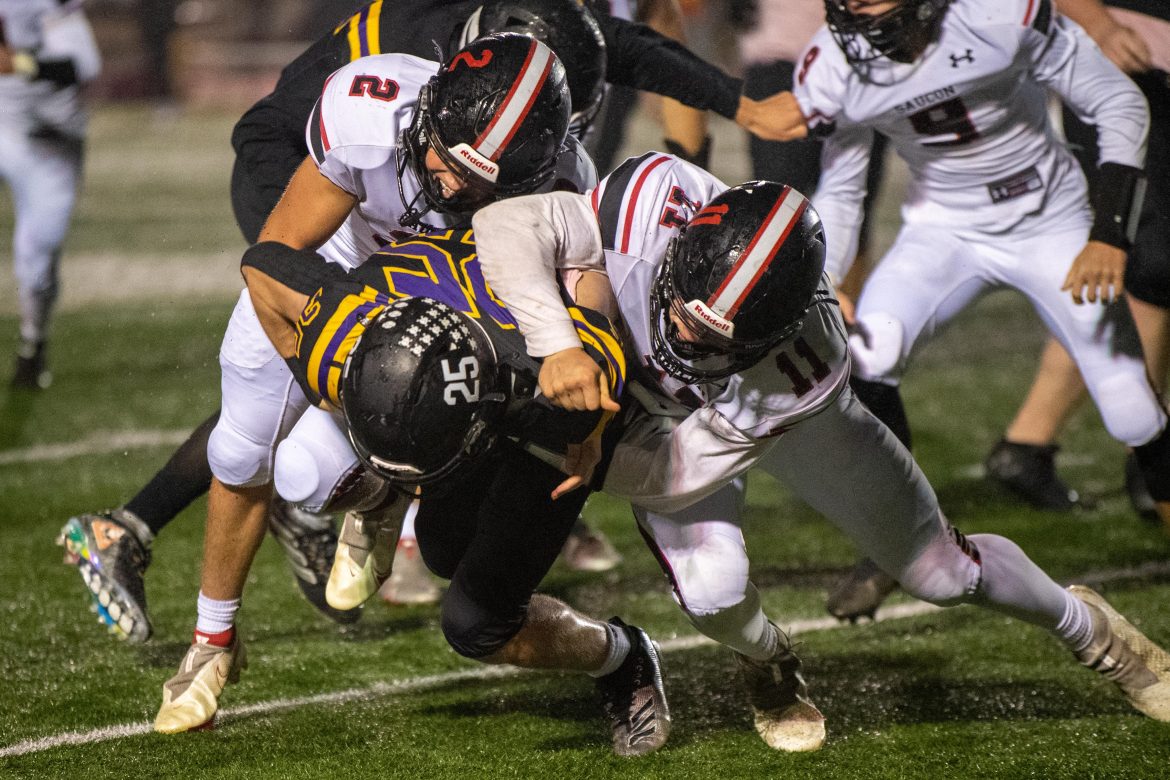 It was tough sledding for both offenses on Friday night when the Pirates and Panthers squared off in their annual rivalry matchup.

The wind was a big factor and it looked like it was the Pirates turn to take advantage of Mother Nature’s work on the next series.  Saucon Valley was forced to punt into the wind from their own 14-yardline.  Palisades pressured the punt attempt forcing Alex Magnotta to improvise.  Magnotta dodged one Pirate to his left, reversed field to his right, jumped the curb of the Pirate defense and sprinted 33-yards for a first-down before being forced out of bounds.  A little Garcia, a little Csencsits and a little Riefenstahl set up the Panthers at the Pirate 2-yardline.  With :10 seconds left until halftime, Panther quarterback Travis Riefenstahl sneaked the ball across the goalline for the score.  With Christopher’s successful PAT Saucon took a 17-3 lead into intermission. 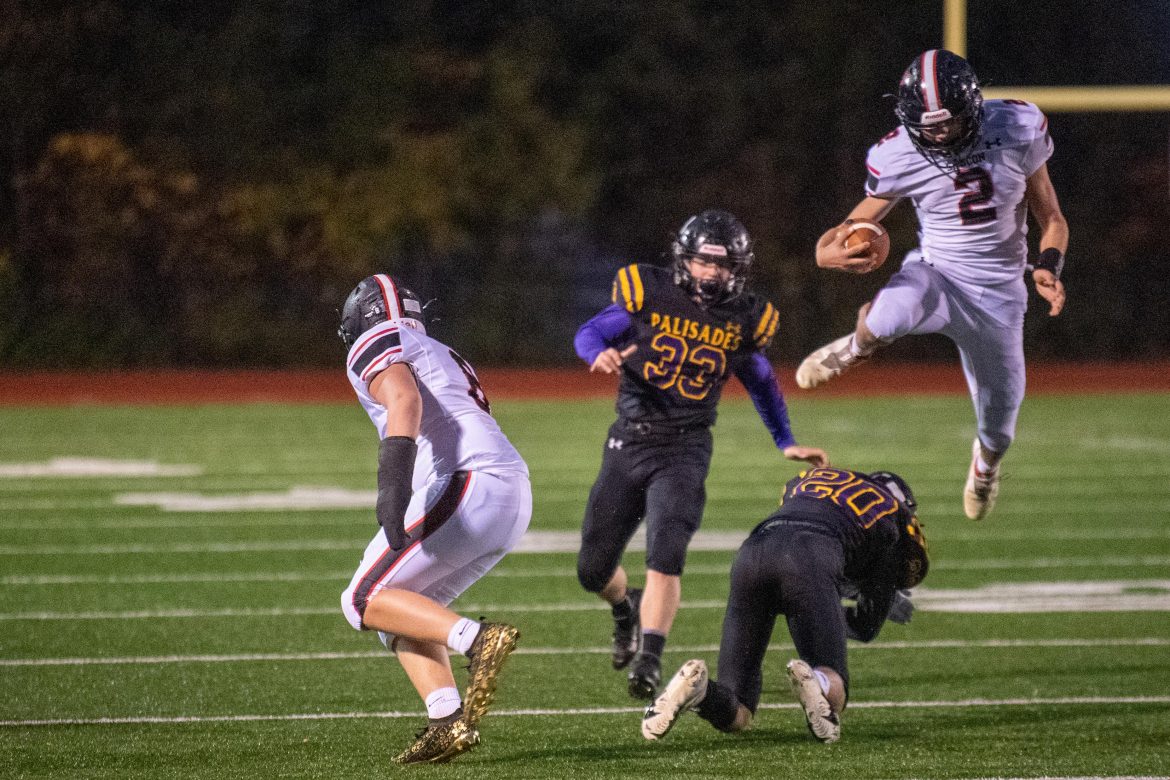 Saucon Valley’s Travis Riefenstahl (#2) hurdles the Pirates for a big first down.

With the concession stand running out of styrofoam cups, the teams took the field to start the second half.  However, the third quarter is best described as a water-logged punt-fest.  Neither team was able to gain enough traction for anything that resembled a scoring opportunity.  In fact, it was not until late in the fourth quarter that Damian Garcia was able to pop a 34-yard run for the game’s final touchdown.  Jake Christopher did his thing and a little over three minutes later time ran out.  Saucon Valley was singing in the rain as the Panthers enthusiastically celebrated their 24-3 rivalry win over the Palisades Pirates.  With the win, Saucon earned their way into the Eastern Conference Championships. 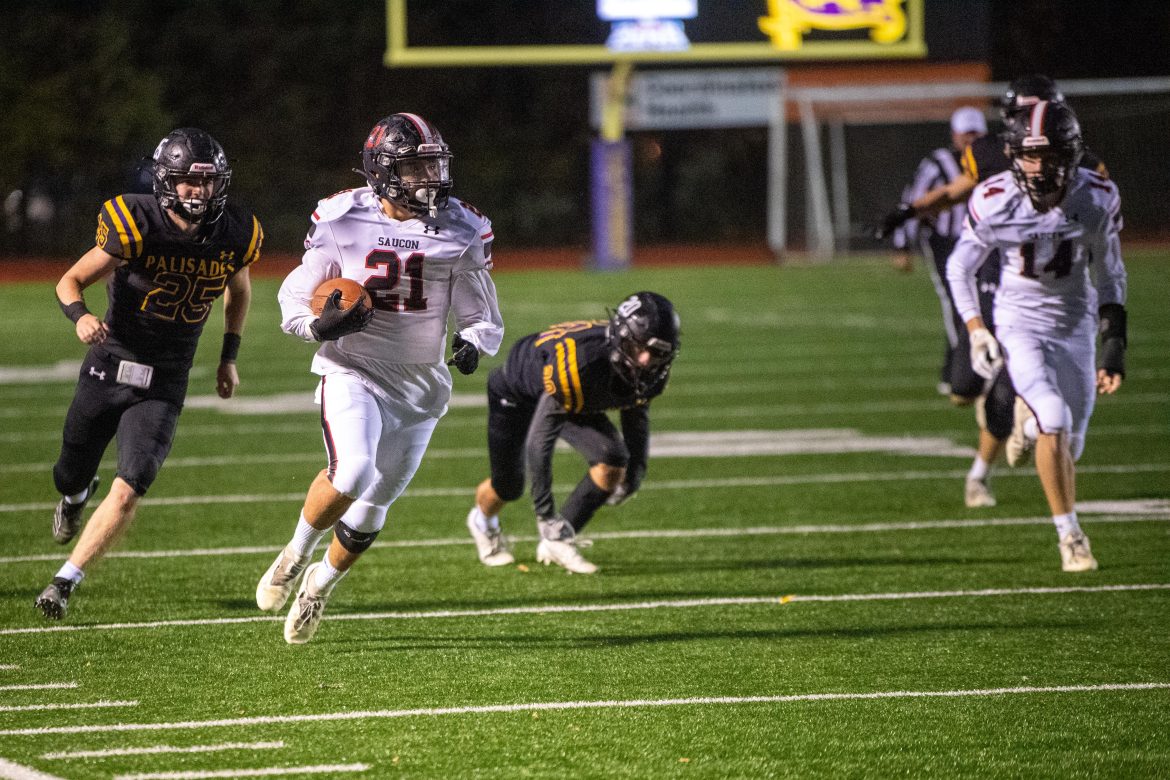 UP NEXT:  Saucon Valley (5-5) will head back to Bangor on THURSDAY to play the Slaters (6-4) in the Eastern Conference 4A Championship game. Kickoff is scheduled for 7 p.m. 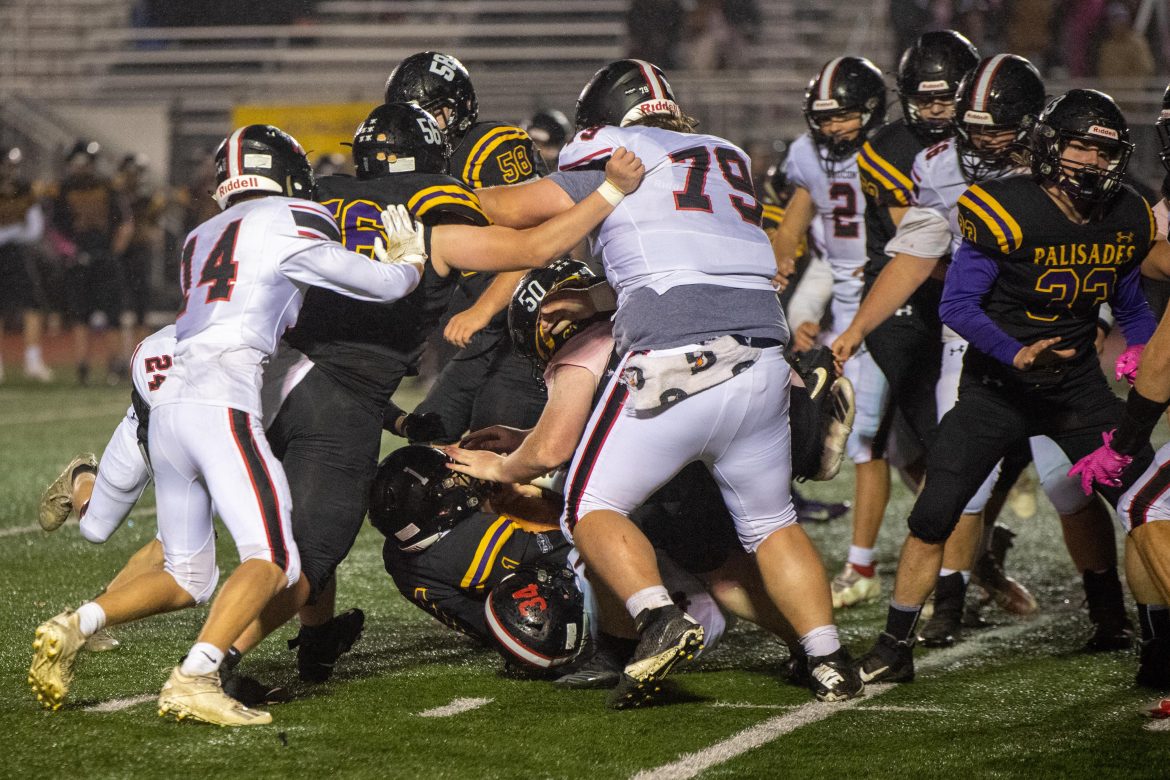 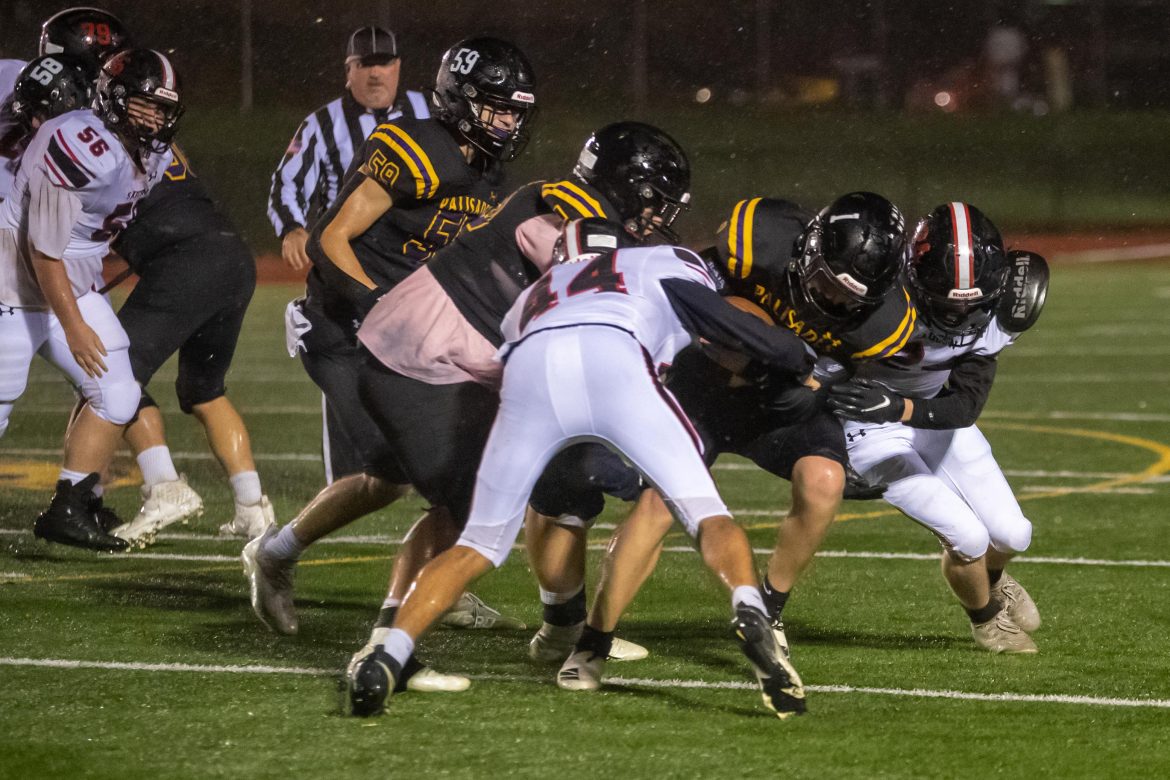 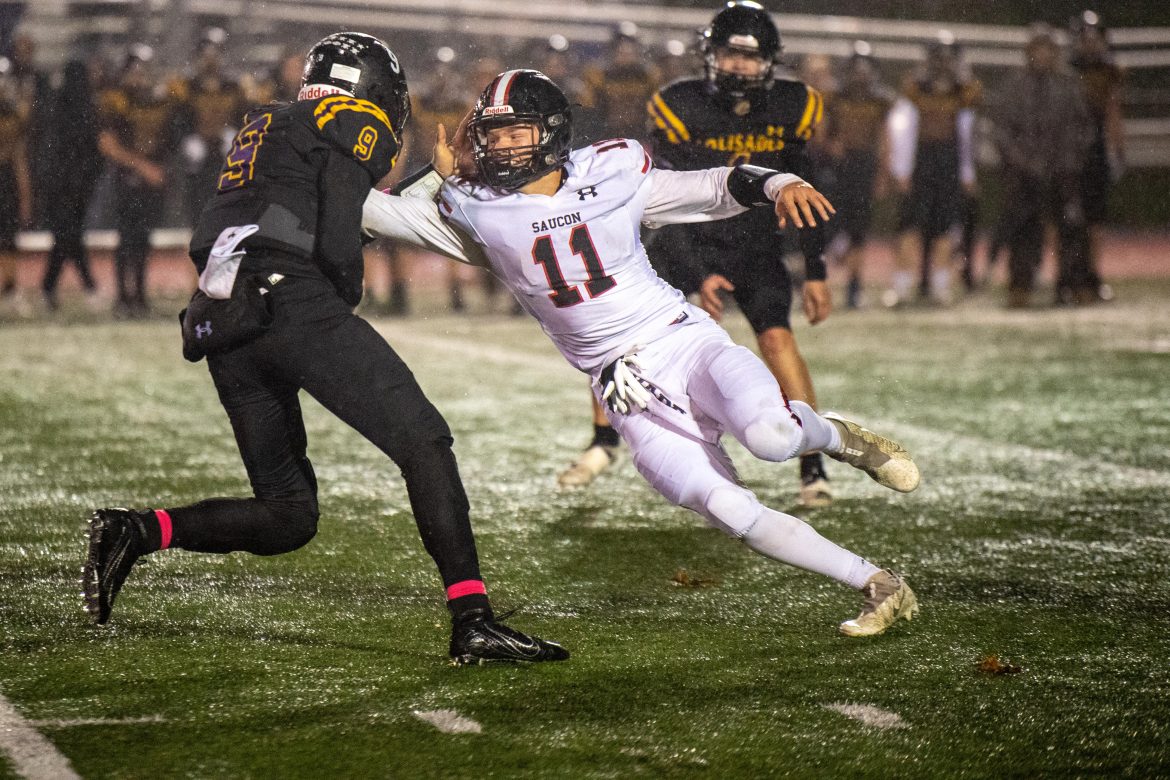 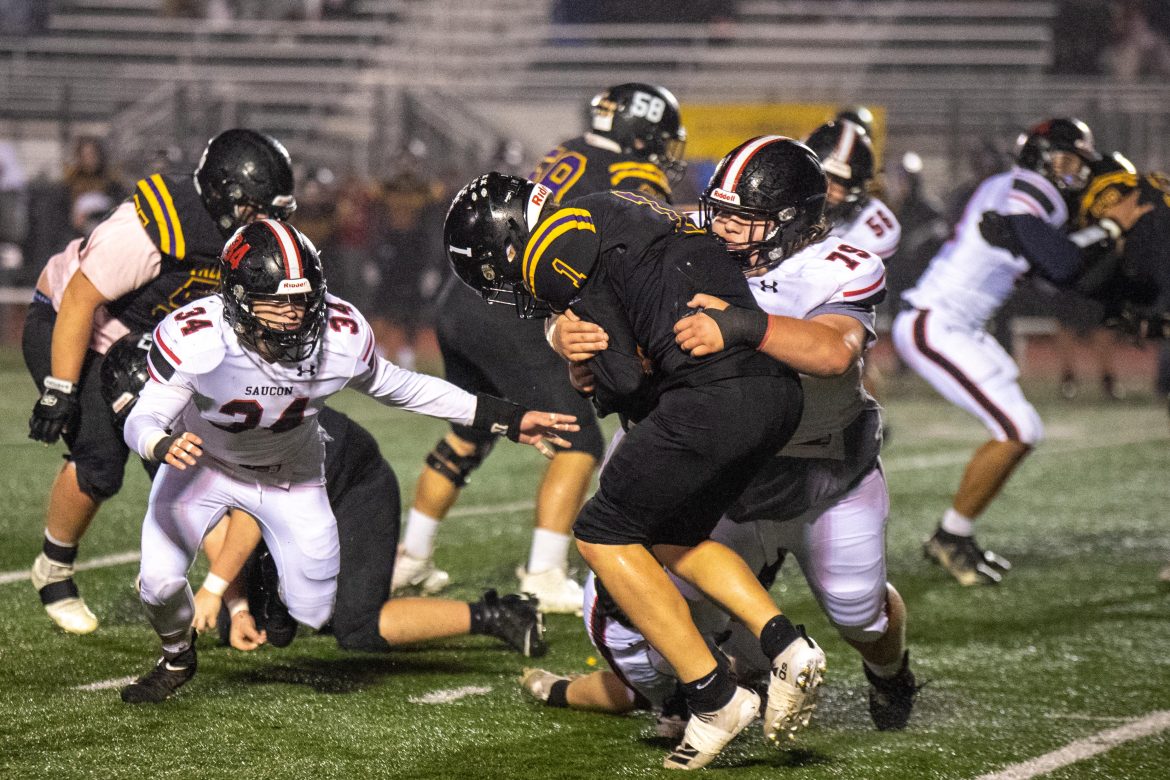 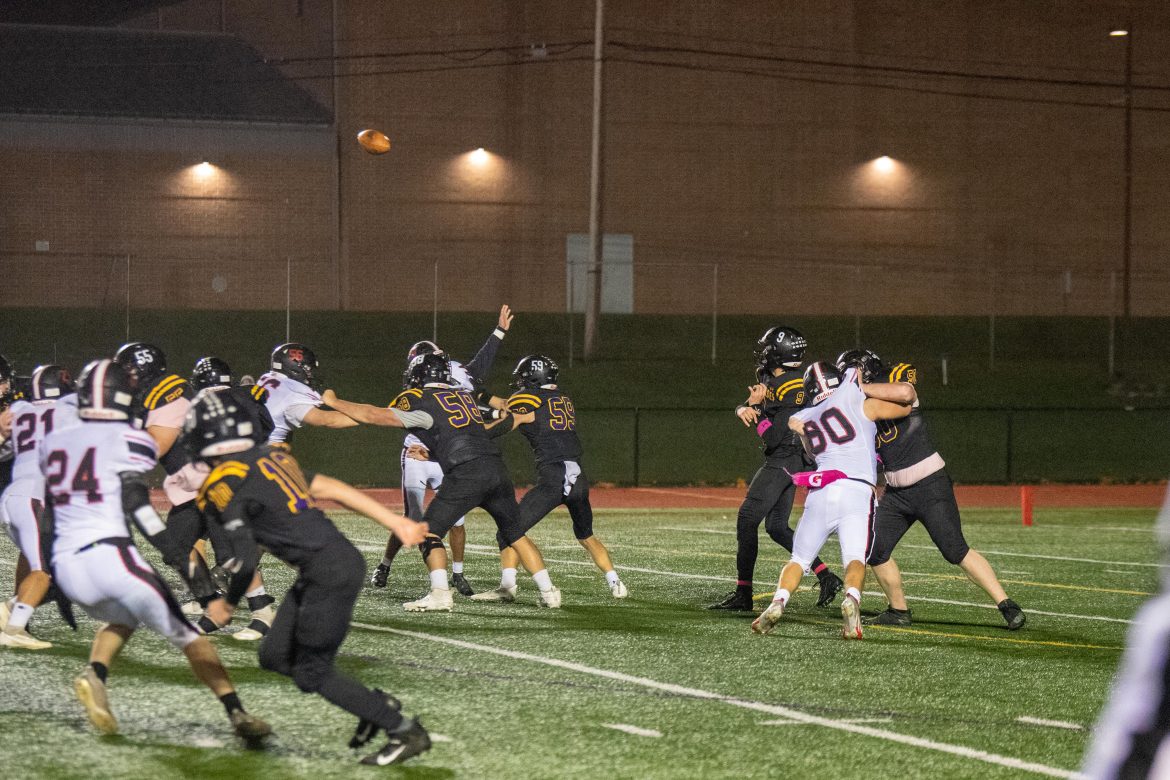 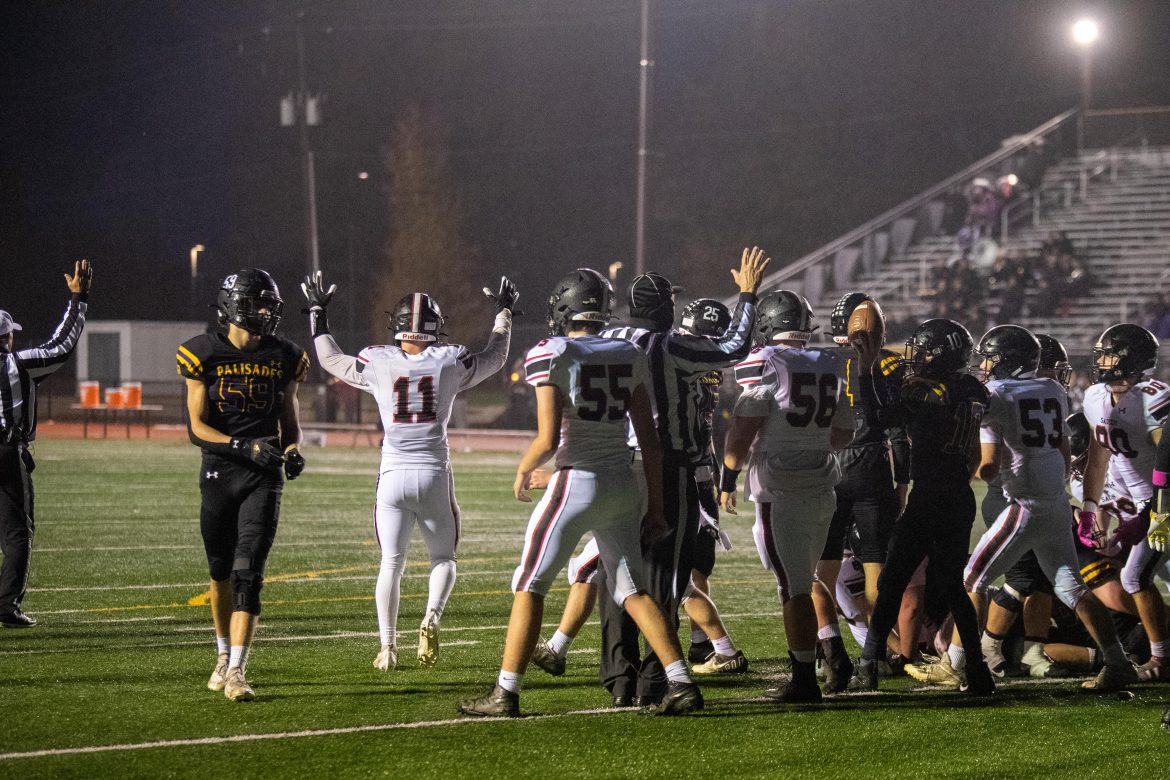 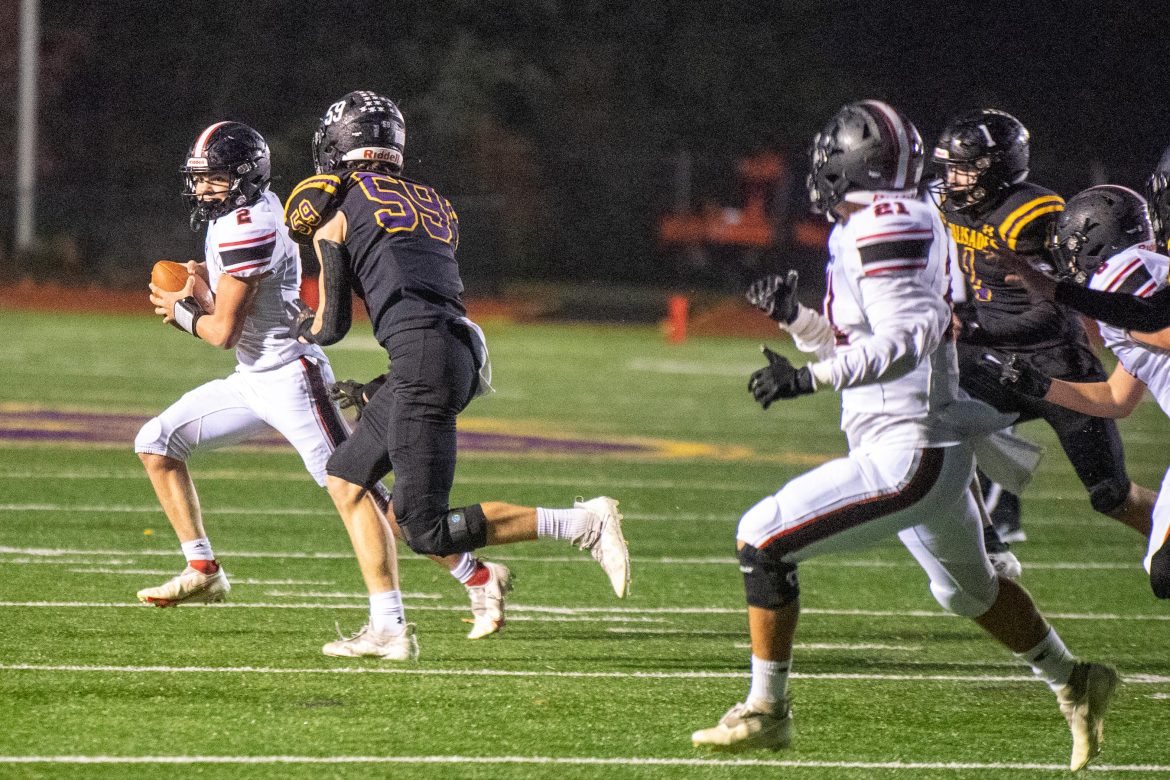 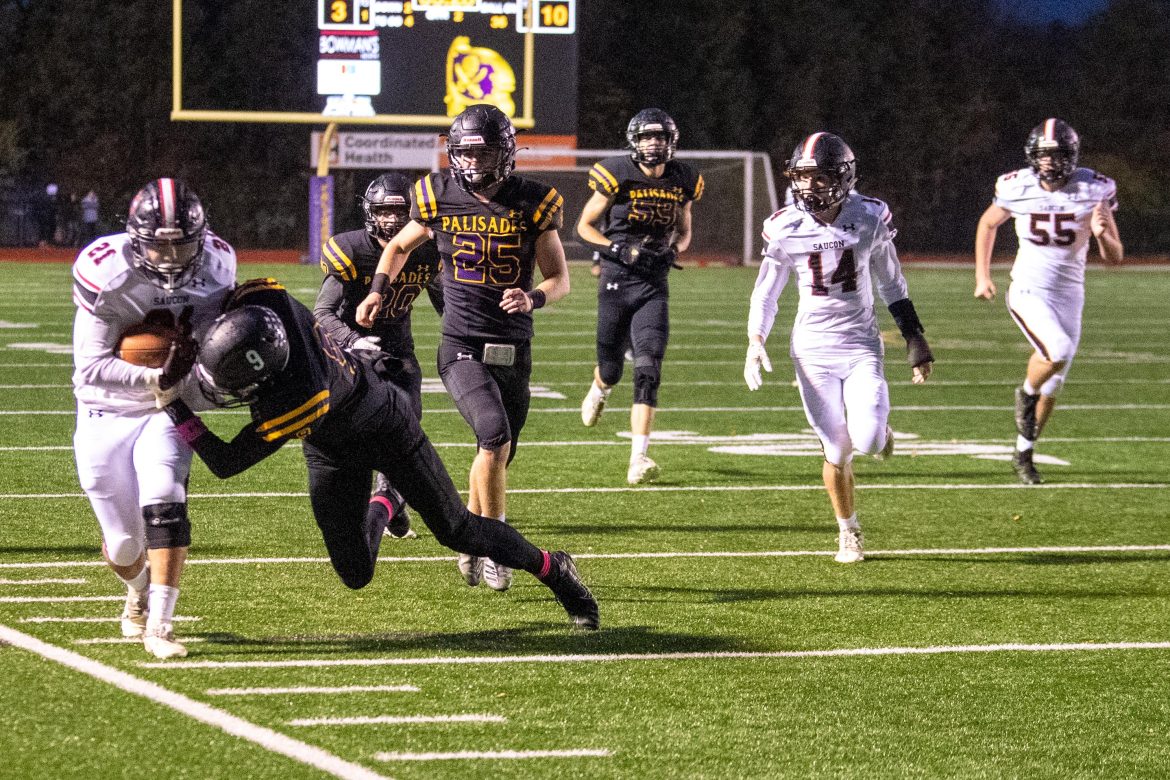 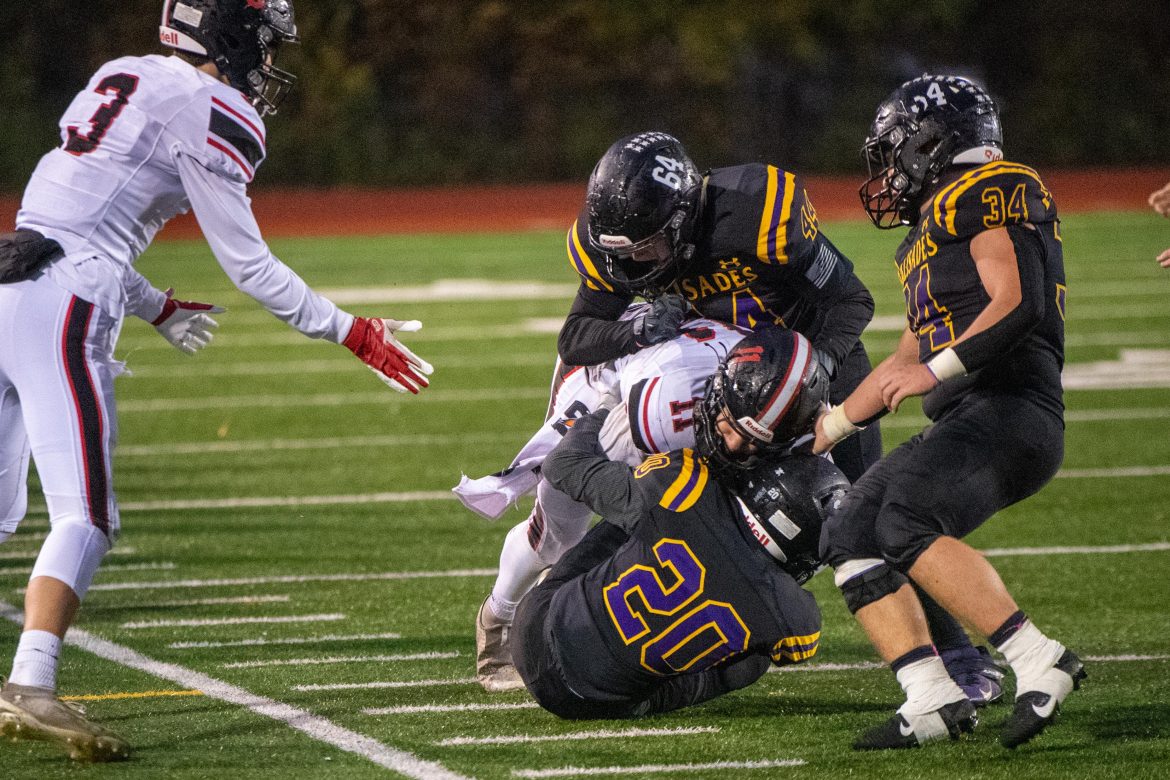 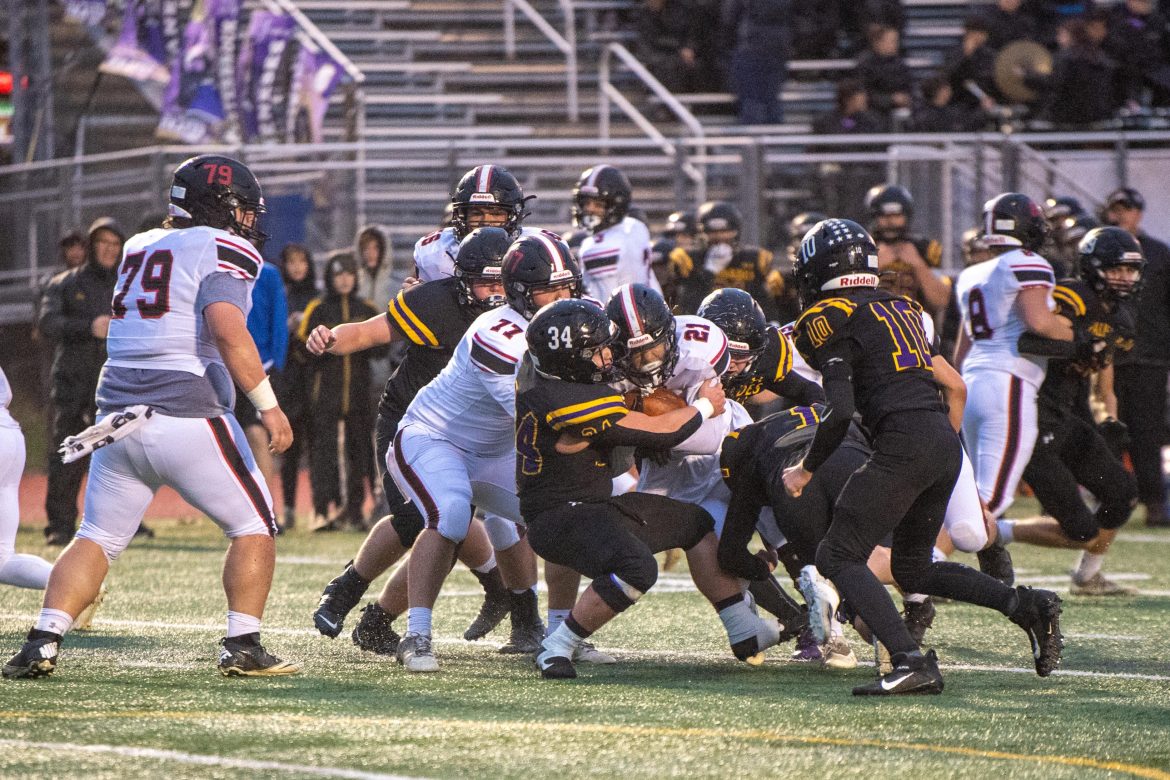 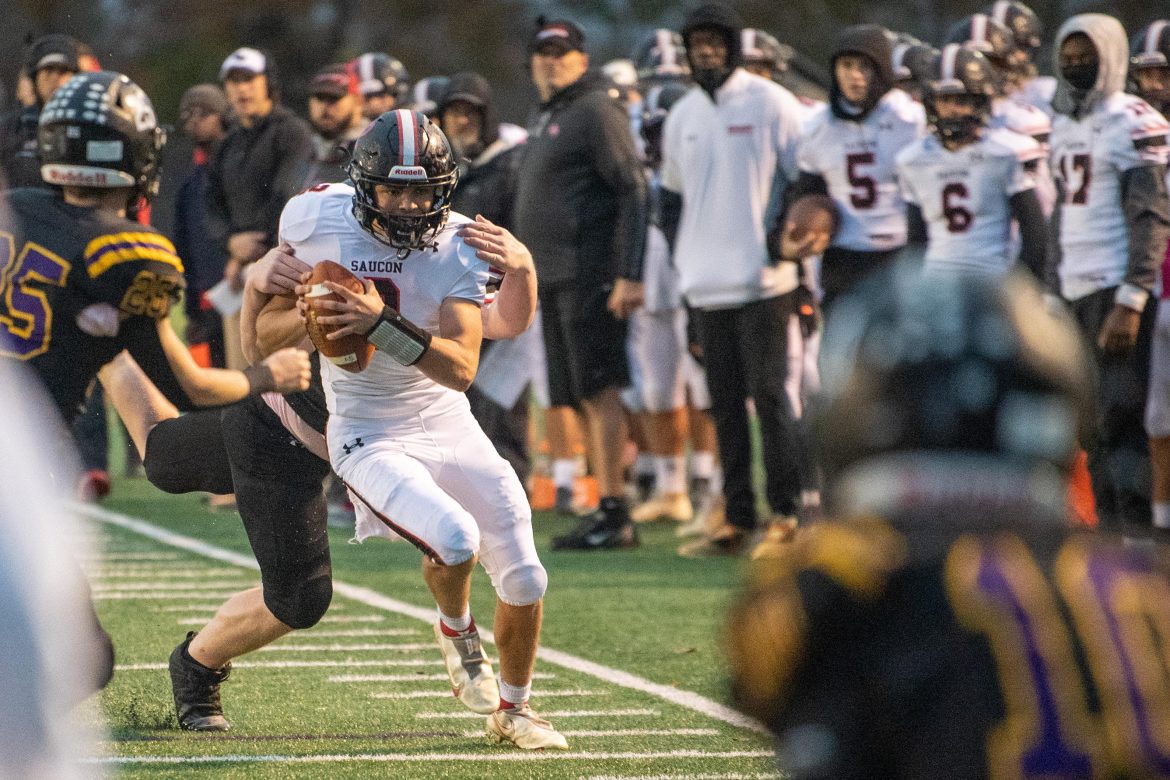 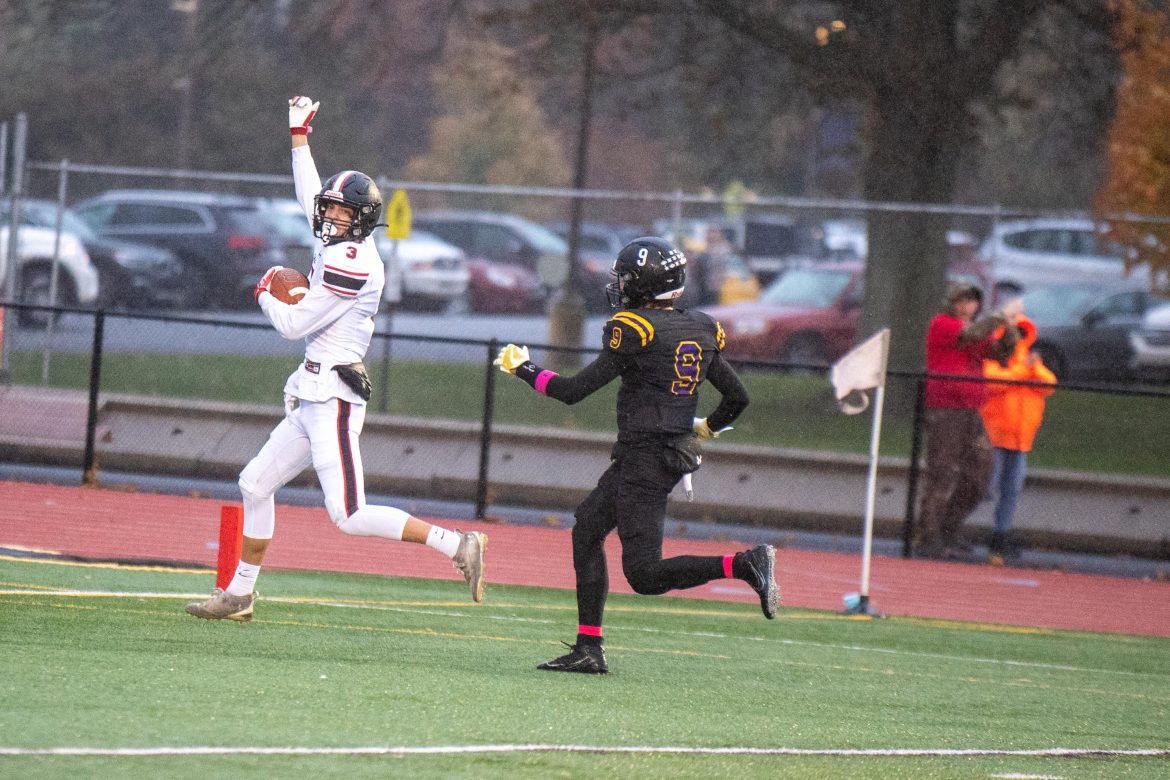