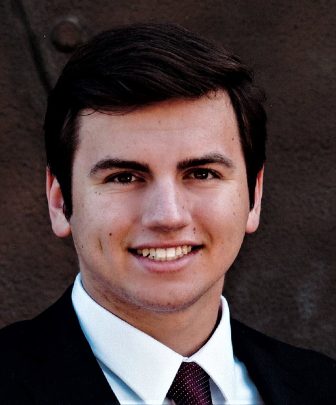 He was born in Bloomington, Ind., on Dec. 31, 2000 to Jodi L. (Nikolajewski) Schwartz, with whom he resided, and Harold Matthew Schwartz of New Hope. He was a graduate of Parkland High School and a forever “Frozen Trojan,” where he maintained over a 4.0 GPA for his entire high school career; a National Merit Scholar Commended Student and recipient of the Award of Academic Excellence (an award for maintaining over a 4.0 GPA all four years); a member of the National Honor Society; a member of the National German Honor Society; and a film reporter for Parkland TV. For 11 years he played with the Parkland Ice Hockey team. Joining the varsity team as an 8th grader, he was part of five league championships. He was currently a student at Penn State University, State College, where he was an honors student in business. He was the recipient of the Penn State Provost Award for his exemplary work and potential to be a difference maker at Penn State; the recipient of the President’s Freshman Award for maintaining a 4.0 average freshman year (less than 2 percent of the school’s 75,000 students achieve this); the recipient of the President’s Sparks Award, which is given to undergraduate students who have earned a 4.0 cumulative GPA; the recipient of the Edward and Judith Anchel Trustee Scholarship, awarded by Smeal College of Business for being an exemplary student; the recipient of the Renaissance Scholarship for maintaining a high GPA; and an inductee into Beta Gamma Sigma, which is the highest academic recognition a business student anywhere in the world can achieve (by being in the top 7 percent of his class). Gus started his ice hockey career with the Lehigh Valley Comets and continued with the Bethlehem Blast, the Lehigh Valley Flames and the Lehigh Valley Phantoms Youth for 15 years. He worked as a counselor at South Whitehall Township for their summer camp. His volunteerism included being a coach for the Miracle League of the Lehigh Valley and a Junior Coach for Special Hockey of the Lehigh Valley, where he was recognized twice with a coaching commitment award, as well as a High Impact Junior Coach Scholarship.

Family and friends are invited to attend a visitation period from 3 to 6 p.m. Wednesday, Dec. 29, 2021 at the Heintzelman Funeral Home Inc., 326 Main St., Hellertown. Mourners are encouraged to make positive choices by following CDC guidelines. Online expressions of sympathy can be recorded at HeintzelmanCares.com.

In lieu of flowers, memorials in Gus’s name may be made to Special Hockey of the Lehigh Valley (lvpolarbears.com), P.O. Box 538, Center Valley, PA 18034.