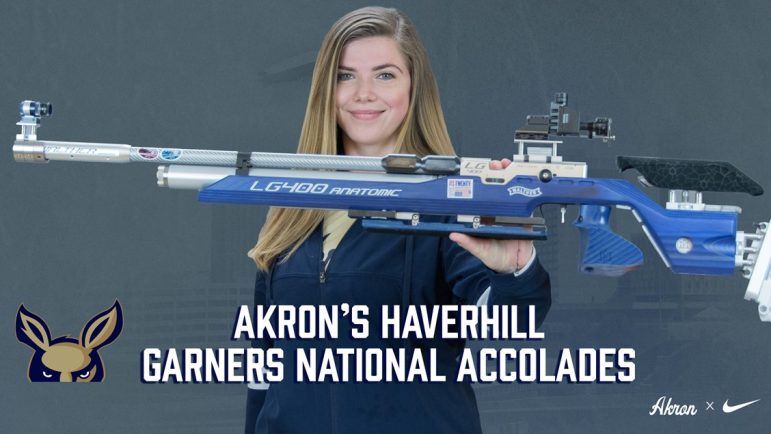 A member of Southern Lehigh High School’s Class of 2018 has earned national accolades in air rifle competition as a student at the University of Akron.

The Ohio university reported on its website recently that senior Jeanne Haverhill “garnered national recognition for her efforts in the air rifle at the recently completed 2021 Rifle Winter Airgun National Championships,” which were held Dec. 8-12 in Camp Perry, Ohio and Anniston, Ala.

The 2021 Rifle Winter Airgun National Championships are sponsored by USA Shooting, which is the national governing body for Olympic competitions in the United States.

“This is one of the few matches held in the United States in which medal winners can earn points towards qualifying for the 2024 Olympics in Paris,” the news release noted.

The championship in which Haverhill competed consisted of three days of matches with a qualification match each day, it said. The top-eight qualifiers each day advanced to an Olympic final to determine the top-three medal winners.

“At the finals, the top-eight competitors start from a score of zero and fire a course of fire which will, one by one eliminate finalists, until the last three standing battle for bronze, silver and gold medals,” the release said. “Haverhill’s performances earned her a spot in the finals each of the three days and ultimately a medal following each of the days.”

On the fourth day of the event the goal was to earn qualifying points for the 2024 Olympic squad. Haverhill captured a bronze medal that day, her university reported.

Following her performance at the championships, Haverhill was reported to be ranked ninth in the U.S., according to the latest USA Air Rifle Shooting rankings.

Haverhill and the 13th-seeded University of Akron rifle team are set to return to competition Jan. 15 at No. 10 Nebraska, the news release said.