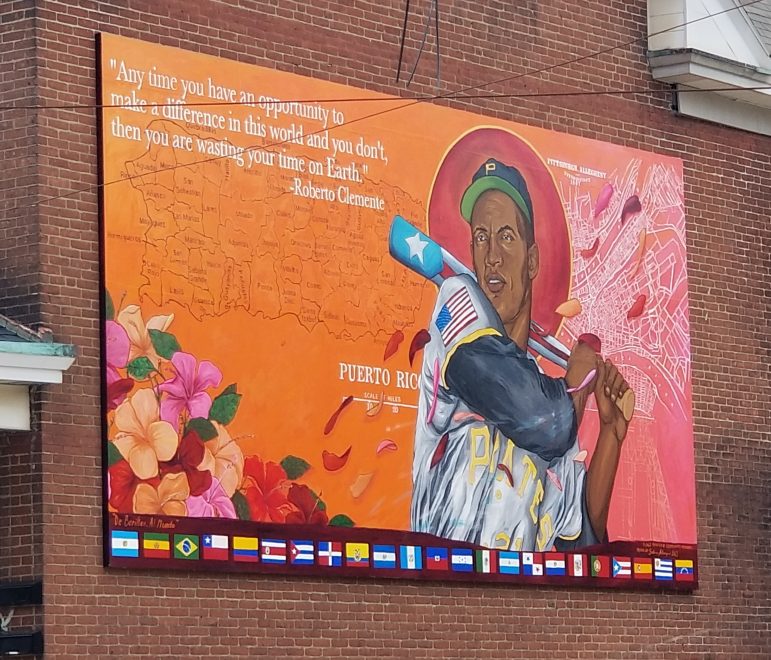 The new mural outside the Hispanic Center Lehigh Valley depicts Roberto Clemente against a backdrop that includes maps of his native Puerto Rico and his adopted hometown of Pittsburgh. The mural includes a quote by Clemente, who was a well-known humanitarian during his lifetime: “Any time you have an opportunity to make a difference in this world and you don’t, then you are wasting your time on Earth.”

South Side Bethlehem visitors and residents have a new mural to admire, and for many in the community the man to whom it pays homage will be a familiar face.

Titled “De Boriken, al Mundo,” the mural was created by Lancaster, Pa.-based artist Salina Almanzar-Oree to commemorate the upcoming 50th anniversary of Roberto Clemente’s tragic death in a plane crash on Dec. 31, 1972. The decorated baseball star had reached 3,000 career hits just months earlier—a feat few Major League Baseball players have surpassed to this day—and was en route to Nicaragua to deliver humanitarian aid following a major earthquake there when his flight crashed into the Atlantic Ocean.

The history of Roberto Clemente’s career and achievements are preserved in a museum in Pittsburgh, the city he represented for his entire 18-year career, during which he won every Major League Baseball award.

“We are thrilled to unveil this incredible piece of public art alongside our clients and supporters from throughout the Lehigh Valley,” said HCLV executive director Victoria Montero. “Roberto Clemente is a true legend who inspired generations of children to pursue sports, while demonstrating the importance of using one’s power and voice to advocate on behalf of others. We are grateful to our sponsors who made this project possible.”

To learn more about the Hispanic Center of the Lehigh Valley, visit HCLV.org.