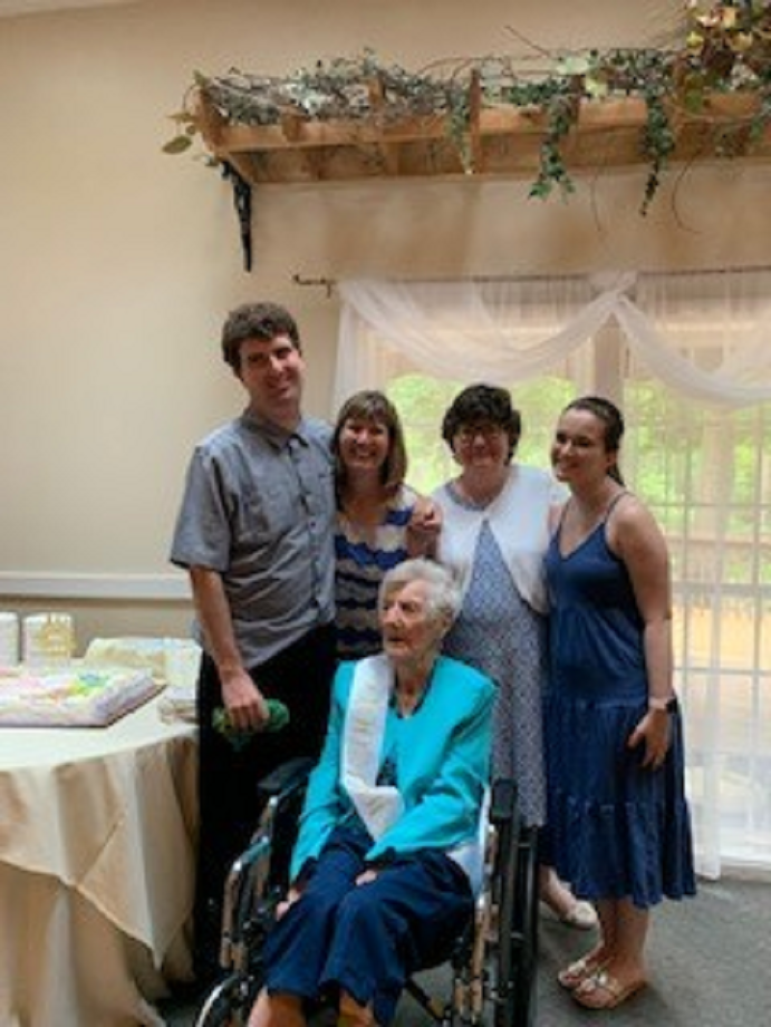 A grand 100th birthday celebration was held July 16 for Ellen Elizabeth (Barrett) Corkery, who was born in Ireland and has lived in Hellertown for the past 22 years.

Ellen Elizabeth Corkery was born on July 16, 1922 in County Limerick, just six months after the Republic Ireland achieved independence from Great Britain. Her parents were James Barrett and Elizabeth Harold Barrett, owners of a small family farm in Appletown.

In 1930, her father decided to move his family to Canada, so Elizabeth and her six-year-old brother Paddy emigrated with their parents to Nova Scotia.

Ellen’s daughter, Eileen Dolphin, shared a recollection of her mother’s journey in a speech given at her birthday dinner, which was held with many family members and friends present at the Meadow of Saucon Valley in Lower Saucon Township.

After living briefly in Nova Scotia the family relocated to Quebec, to a region where only French was spoken. With the help of a French-English dictionary and a bilingual classmate, however, eight-year-old Ellen adapted and learned the language.

In her twenties, she moved to Montreal to become a domestic servant for a wealthy family, eventually becoming their cook.

“She took cooking lessons at the YMCA in Montreal and became a French chef,” Dolphin said. “Anyone who knows my mom knows she was a wonderful cook.  If you’ve seen the show ‘The Great British Bake Off,’ my mother could make all those things: lace cookies, spongecakes, plum puddings with hard sauce, soufflés, pastries–she could do it all.”

It was a on a visit to New York City that Ellen met her future husband, Jeremiah Corkery, who had been born in Brandon, County Kerry, Ireland, in 1919, and emigrated to Brooklyn in the 1950s. The two married in Canada in 1956 and Ellen relocated to the U.S.

There they raised two daughters, including Eileen, who became a Registered Nurse, and her older sister Ellen Cavallaro, who became an attorney and now lives in New Jersey.

“My mother was a homemaker and a mom who took care of everyone,” Dolphin recalled. “She was involved in our school and our Saint Agatha church.”

When her daughters were in high school, Ellen returned to the workforce and was employed as a housekeeper/cook for a federal judge in Brooklyn, John Bartels.

Her husband passed away in 1984 and her daughters both married and began families, which grew to include grandchildren Molly and James Cavallaro and Beck Dolphin.

In 2000, Ellen followed Eileen and her husband Basil to Hellertown, where Eileen works as a nurse at Saucon Valley High School.

“She has loved living in Hellertown, she has wonderful neighbors,” Eileen said, noting that “she finally got to experience living in a small town, which just suited her so well.”

After suffering a fall five years ago, Ellen moved in with her daughter and son-in-law, and in February she moved to Saucon Valley Manor. 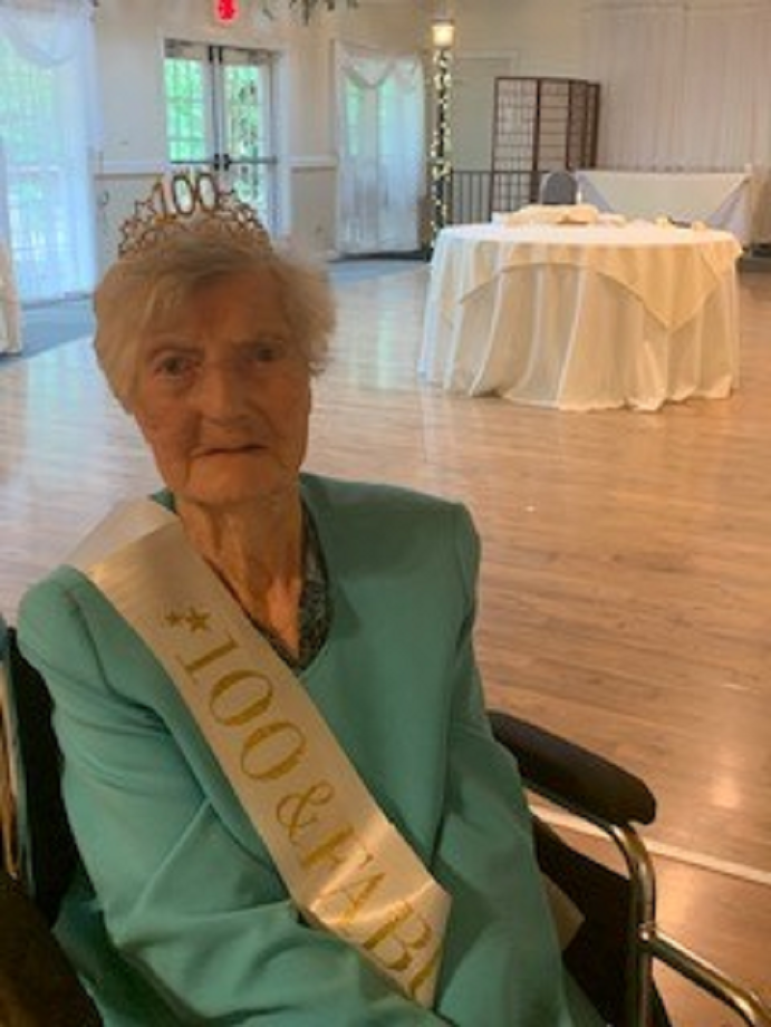 Ellen Corkery was born in County Limerick, Ireland, on July 16, 1922. She celebrated her 100th birthday at a dinner hosted by her family at the Meadow of Saucon Valley in Lower Saucon Township. Corkery has been a Hellertown resident for the past 22 years. (Contributed photo)

“She is doing very well there and the staff has been wonderful,” Eileen said. “We really appreciate all of you who came from near and far to join us in this celebration.” 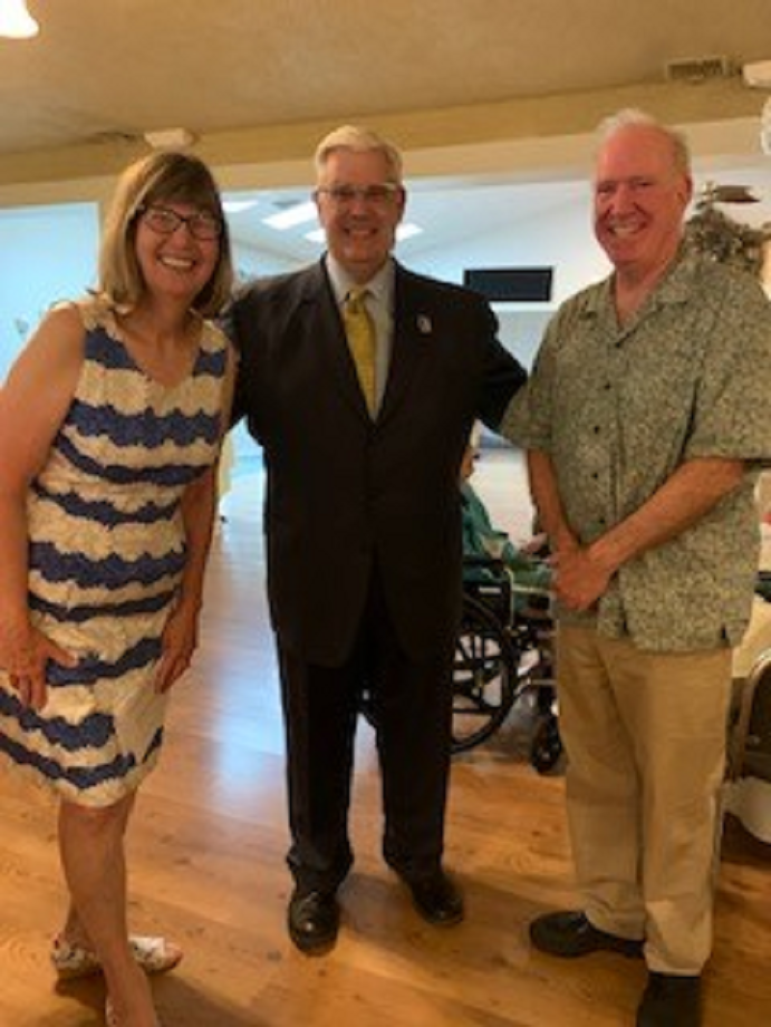 Hellertown Mayor David Heintzelman attended the 100th birthday dinner for Ellen Corkery and proclaimed July 16, 2022 Ellen Corkery Day in the borough. He is pictured above with Corkery’s daughter and son-in-law, Eileen and Basil Dolphin. (Contributed photo)

“She has always been a caring, thoughtful, kind, generous spirit, a great cook and a solid citizen,” Indelicato said. “She has brought love and joy with her gentle manner to so many people during her 100 years.”

“My mother’s life has been filled with love, love of her family, love of God, love of Ireland and her adopted countries,” Eileen said in a toast at the birthday dinner. “If you are Irish you know her as Nelly; if you are French Canadian you know her as Hélène; and if you are American, you know her as Ellen. Let’s toast to a life well-lived and well-loved.”

Note: Information in this story was contributed by family and friends of Ellen Corkery.