The calendar says it’s spring, but Mother Nature apparently isn’t interested in that minor detail. Instead, she seems more interested in playing an early April Fool’s Day joke on Pennsylvanians weary after a long, cold and snowy winter. 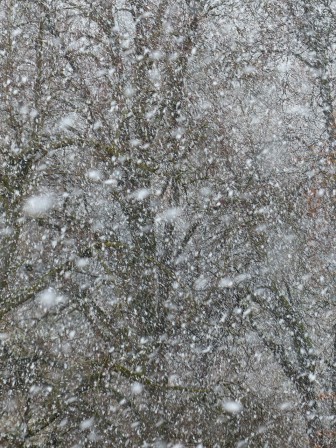 In spite of it being the last day of March, as of late Tuesday afternoon snow was falling across much of the Saucon Valley, and the National Weather Service is warning that “light snow accumulations are possible” Tuesday night, particularly in Carbon and Monroe counties.

Motorists are being urged to exercise caution while driving during the overnight hours, as the temperature is forecast to drop to about 30 degrees.

Although little accumulation is expected in the Lehigh Valley, several inches could accumulate in areas at higher elevations, Lehigh Valley Weather Authority predicted in a Facebook post.

Springtime snow is not unheard of in eastern Pennsylvania, but accumulating snow with the potential to affect travel in the springtime is a relatively rare event.