A black bear was spotted in a yard off Wassergass Road in eastern Lower Saucon Township Sunday, according to a reader who shared a 16-second video of the sighting. 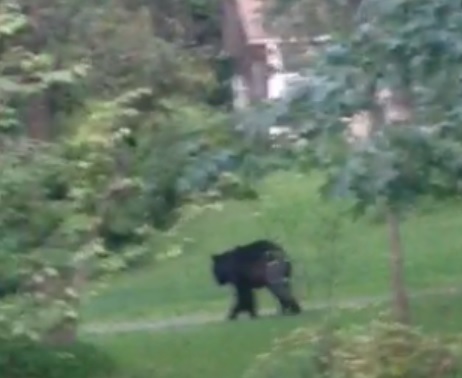 A still from the bear video filmed by Michael Karabin in Lower Saucon on Aug. 16, 2015.

Michael Karabin said the bear was first seen Aug. 10, when he gorged on about 10 pounds of birdseed after bending a bar 45 degrees to get to the feeders that held the tasty treat.

On Sunday the bear was disappointed to find there was no more birdseed to be had, Karabin said.

“The exciting part was when I walked around the corner of the garage thinking my wife was doing something with the cans and there stood the bear 15 feet in front of me,” he said. “(It seemed) he didn’t care, so I beelined to the house.”

This is the second bear sighting in the Wassergass area in as many weeks.

Last week a bear was spotted in the area of Mockingbird Hill Road and Apple Street, which is about a mile over the hill from the area of Sunday’s sighting.

Local authorities advised residents in late July to limit the bears’ access to food, in the wake of recent sightings.

“Bears love to eat, so remove the food source,” they said in a statement posted on the Lower Saucon Township website under News. “Bird feeders should be taken down and garbage secured until garbage pick-up day. Bears will not frequent or stay in an area if they cannot get enough to eat.”