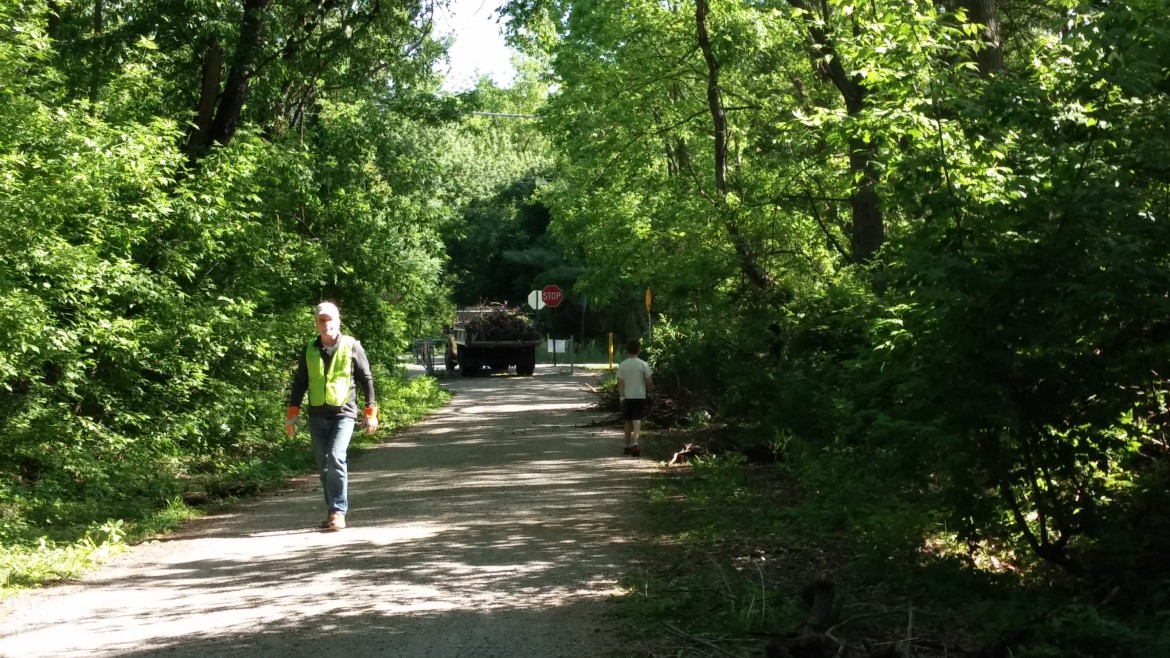 Editor’s Note: The following post originally appeared on Michael Sutherland’s city planning blog, A Place for People. It has been edited and republished on Saucon Source with his permission.

Many Hellertown residents enjoy the Saucon Rail Trail as a public resource for recreation. It is personally one of my favorite places to go for a run in the area. But it is seldom used for anything but recreation. What if we could link it to the many businesses just a couple blocks east on Main Street?

The Borough of Hellertown has thought about this too. When Tumminello Park (near McDonald’s) was built, the plans called for a small pedestrian bridge over the mill race to connect to the Saucon Rail Trail.

The proposed site for the pedestrian bridge connecting to the Saucon Rail Trail.

From there, people could travel through the park by foot or bicycle over to Main Street.

From there though, crossing Main Street to reach the Hellertown Diner, DiMaio’s, Saucon True Value and many other businesses is a challenge. Currently there is no crosswalk for people to travel along. What I would suggest to solve this issue is the construction of a pedestrian island. I know that I have used the example of the Foster Avenue/Atherton Street pedestrian island in State College (below) before.

This example of a median to help pedestrians cross a street in State College, Pa., would be a great idea for Main Street in Hellertown in certain spots.

Implementing the above design in the center turn lane of Main Street would allow people to cross one lane of traffic much more easily. Currently, they must try to cross three lanes at once. This design could be implemented rather easily, provide a higher level of safety for pedestrians and allow the large trucks that travel this route to move through.

With Giant (1880 Leithsville Road) being the main grocery store around Hellertown, many people travel to it often. I have often traveled down to it by bike, but currently doing this is rather unsafe. Despite this, I have often seen the bikes of high school employees of Giant and other stores locked up at the shopping center.

The proposed site for the pedestrian bridge connecting to the Saucon Rail Trail.

A gap in the grass filled with garbage, which could hold a sidewalk or shared path.

If parking isn’t allowed, then can we put up some posts for protection to create a safe path to Giant?

The Meadows Road/Route 412 intersection. It is rather harrowing to cross here, with large amounts of traffic. Shortening the road crossing and marking it well with paint would help to create the connection to the Giant.

The drain doesn’t help, but the shoulder is wide enough to create a sidewalk or shared path.

As the service entrance widens, the space to add in a sidewalk or shared path grows. A marked crossing would be helpful here also.

And apparently people already travel down here by foot. This path through the grass shows exactly where a sidewalk or shared path would go.

Below is a Google Map of the proposed location for the sidewalk/shared path.

With these additions, the Saucon Rail Trail could become a more useful resource for connecting local people to the surrounding businesses. It will take some work, but I believe that it can continue to help make Hellertown a great place for people.

Michael Sutherland is a 2012 graduate of Saucon Valley High School. He is currently a senior at Penn State, where he studies geography and blogs about city planning issues at A Place for People.