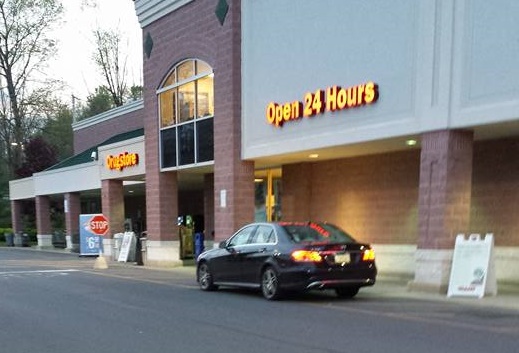 Alicia Kichline of Hellertown shared this photo of a car double parked (with no one inside it) outside the Giant Food Store in Lower Saucon Township Monday. 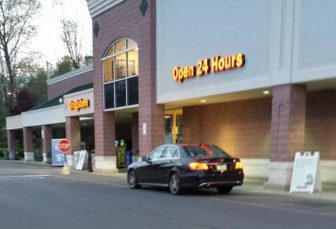 Alicia Kichline of Hellertown shared this photo of a car double parked outside the Giant Food Store in Lower Saucon Township Monday. Kichline said no one was in the car.

Imagine that you have an elderly parent or a disabled passenger you need to help get into a store–or you just need one item and you’re in a rush–so you decide to park in the fire lane outside the supermarket while you run in just for a minute.

Unfortunately, that’s illegal, and your car could be ticketed or towed if you decide to chance it–which people sometimes do outside the Giant Food Store at 1880 Leithsville Road in Lower Saucon Township.

On Monday evening, Alicia Kichline of Hellertown took a photo of a black Mercedes-Benz sedan double-parked in the fire lane outside the store and shared it on Facebook, sparking a lively discussion by local residents about whether or not it’s OK ever to park in a fire lane.

Kichline said no one was in the car at the time, and that she watched it for about five minutes to see if anyone would return.

Some Facebook commenters didn’t see a problem with the car being double parked in a fire lane, and said depending on the circumstances it may have been necessary. They said the unknown owner of the car shouldn’t be judged without knowing the complete circumstances.

“What if an elderly parent was inside and needed help getting to the car?” asked Kathy M. “Benefit of the doubt (should be given)!”

“That’s the problem with assumptions. How do you know they were not helping someone old or sick? Sure they could have just been a jerk, but how do you know?” she said.

And Beth Anne C. was one of several people who said the self-righteous attitude of some commenters was uncalled for.

“Perhaps the driver of the vehicle had to escort an elderly person into the store,” she said. “Who actually really cares anyway? Work, park, shop and move about your day. Worry less about everyone else and focus on your own life and its happiness.”

The fact that Kichline pointed out the make of the vehicle–a luxury car–in her post also irked some, who questioned why the presumed social class of the driver was even brought up.

“Who knows what the driver of the car was there for at the time?” Beth Anne asked. “I sense that the author of the post bemoans that the make and model of the car was higher-end,” she said.

“Ass—– drive all types of cars, not just MBs,” agreed Paul B.

Others said there’s never an acceptable reason for parking in a fire lane, which exist to provide police, fire and ambulance staff immediate access to commercial and public buildings in the event of an emergency.

“It’s not an assumption that they were illegally parked in a clearly marked fire lane,” Matt B. commented. “The fire lane is for emergency vehicles only. Why is this such a hard concept to grasp for some people?”

“Obviously everyone breaks the law once in a while whether it be speeding or smoking pot, but when Lower Saucon Police Department is there cracking down on ya for parking in a fire lane, which they do ALL THE TIME, where your personal vehicle is NOT permitted because of emergencies, then don’t go crying to the cop because your 89-year-old mom needed to be closer to the store,” said Kate C., with reference to another comment about an elderly woman needing help getting in and out of the store.

“My great-grandmother is 98 and when we go to the grocery store, I help her out of the car and make sure she is sitting on a bench. Then I move my car to the correct parking spot,” she said. “I’m not going to be a jackass and park where my car is not permitted unless it’s for 60 seconds to make sure she’s safe before I move it. There are too many people that think they are above everyone else so they can do what they want. Well, whether you drive a Benz, truck or lemon (and I’ve had all three and still never had the mentality where I could park where I wanted) you park in the damn lot and that’s it.”

Where do you stand on this issue? Do you think there are circumstances in which it’s OK to briefly leave your car unattended in a fire lane outside a store, such as helping a handicapped family member? Or do you think it is never OK, no matter the circumstances? If you do think there is a problem with people parking in fire lanes outside stores like Giant, what can be done to address it? Tell us in the comments.

One thought on “Your Views: Is It Ever OK to Park in a Fire Lane?”