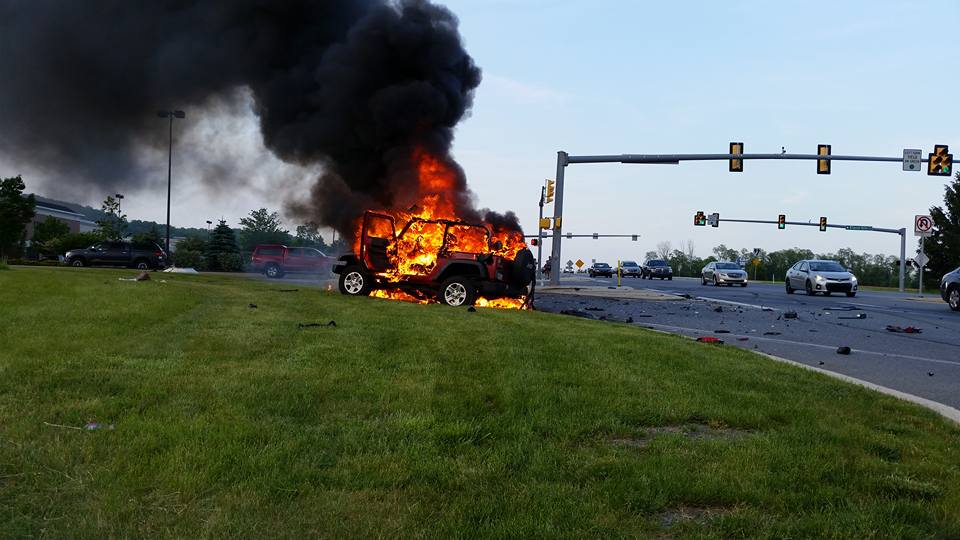 A Jeep burns near an entrance to the Promenade Shops at Saucon Valley in Upper Saucon Township following a violent accident on Center Valley Parkway on May 26, 2016. 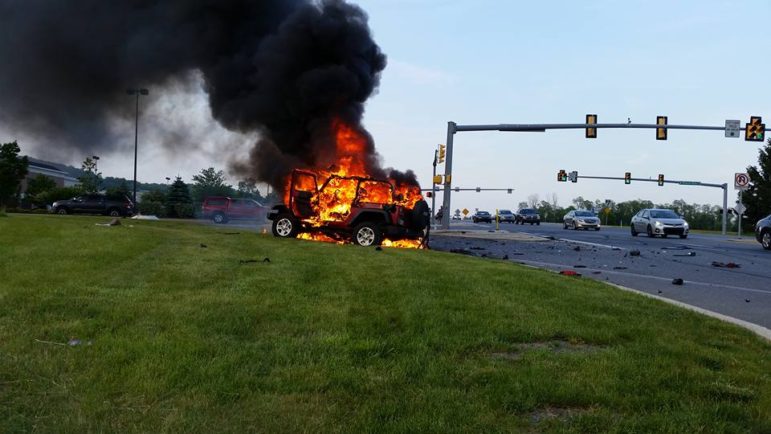 A Jeep burns near an entrance to the Promenade Shops at Saucon Valley in Upper Saucon Township following a violent accident on Center Valley Parkway Thursday evening.

A man who ran to rescue a woman from a burning Jeep after witnessing a high-speed crash on Center Valley Parkway near the Promenade Shops in Upper Saucon Township Thursday evening is being called a hero by many people on Facebook.

Roger Counterman of Coopersburg recounted his harrowing experience in a public Facebook post Friday, in which he detailed the chain of events that unexpectedly put him in harm’s way.

“On my way home from the gym, (I was) heading past the Promenade when a car merged onto Center Valley Parkway in front of me, and floored it, changing lanes to pass a car just as he was going threw the next intersection,” Counterman said. “The Jeep that was making a left turn from the opposite direction never seen his speed as she proceeded to make her turn in front the car who was doing the speed limit. I watched as he plowed his fancy Audi into the passenger side of that Jeep at 100 mph, sending it flying threw the air like a Matchbox car, landing 50 feet away, and instantly exploding into a massive fireball like something out a [expletive] Diehard movie.”

Counterman said he stopped his car and ran over to the burning Jeep, only to “find this young girl, unconscious, burnt and hanging out of the open driver door stuck in her seat belt. The rear interior and passenger seat was already engulfed in fire. There was two other gentlemen there at this point. I wrapped my arms (around) her, reached in to undo the seat belt and we carried her out. A minute later the entire vehicle was on fire.”

The Morning Call reported that the woman who was driving the Jeep was about 18 to 20 years old, and that her current condition is unknown.

The man who was driving the Audi was also reportedly injured in the accident, with Counterman telling the newspaper that he was able to walk away from his vehicle but “was banged up pretty good” and “bleeding.”

In his Facebook post–which as of Saturday night has been shared more than 1,000 times–Counterman said the woman he rescued did regain consciousness in his presence, and hopes she makes a full recovery.

“Thank god you and those other guys were there,” commented Tara Ashley. “It takes a lot to rush towards danger and you three saved her and put yourselves at risk.”

And Stephanie Ann Mary said, “Roger Counterman, the world needs more people like you. You definitely are that girl’s hero.”

It is still unknown if police are planning to file any charges against anyone involved in the accident. 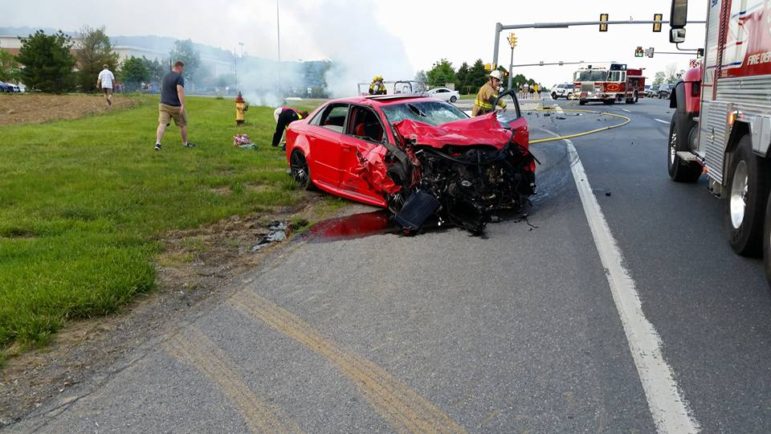 The front of a car involved in an accident near one of the entrances to the Promenade Shops at Saucon Valley Thursday is shown smashed in this photo shared by rescuer Roger Counterman.