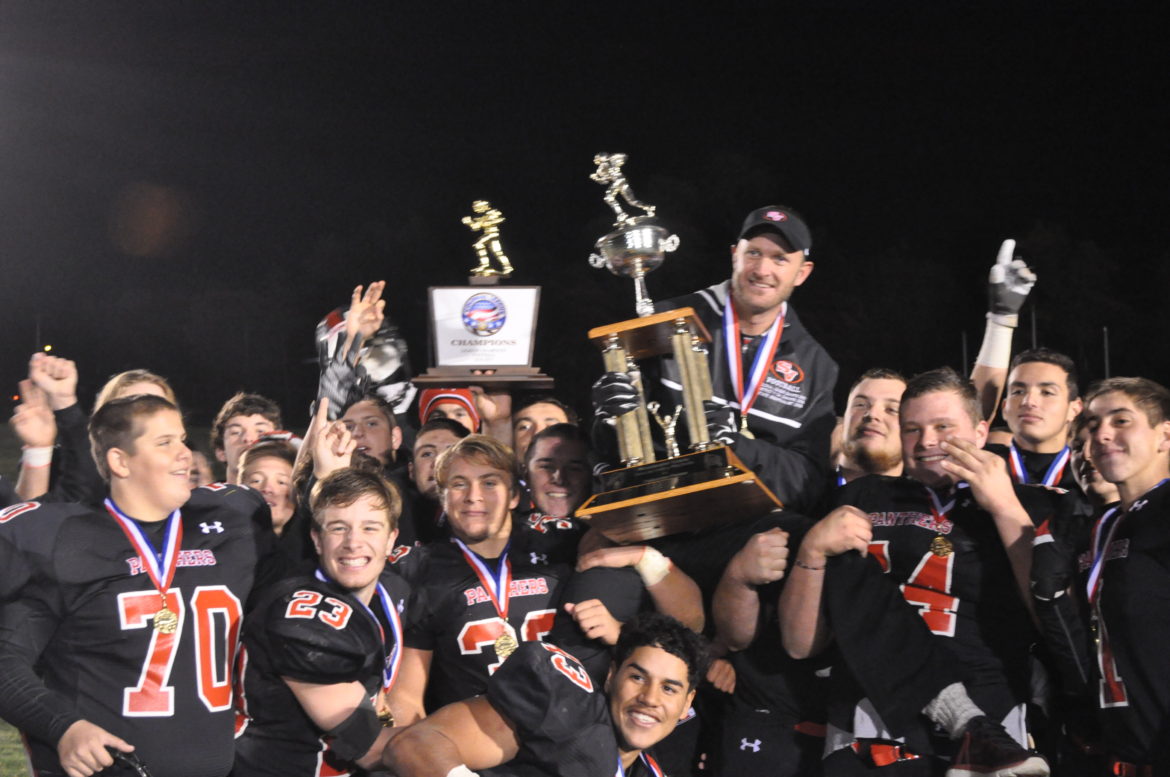 The Panthers give Coach Sams a championship ride. 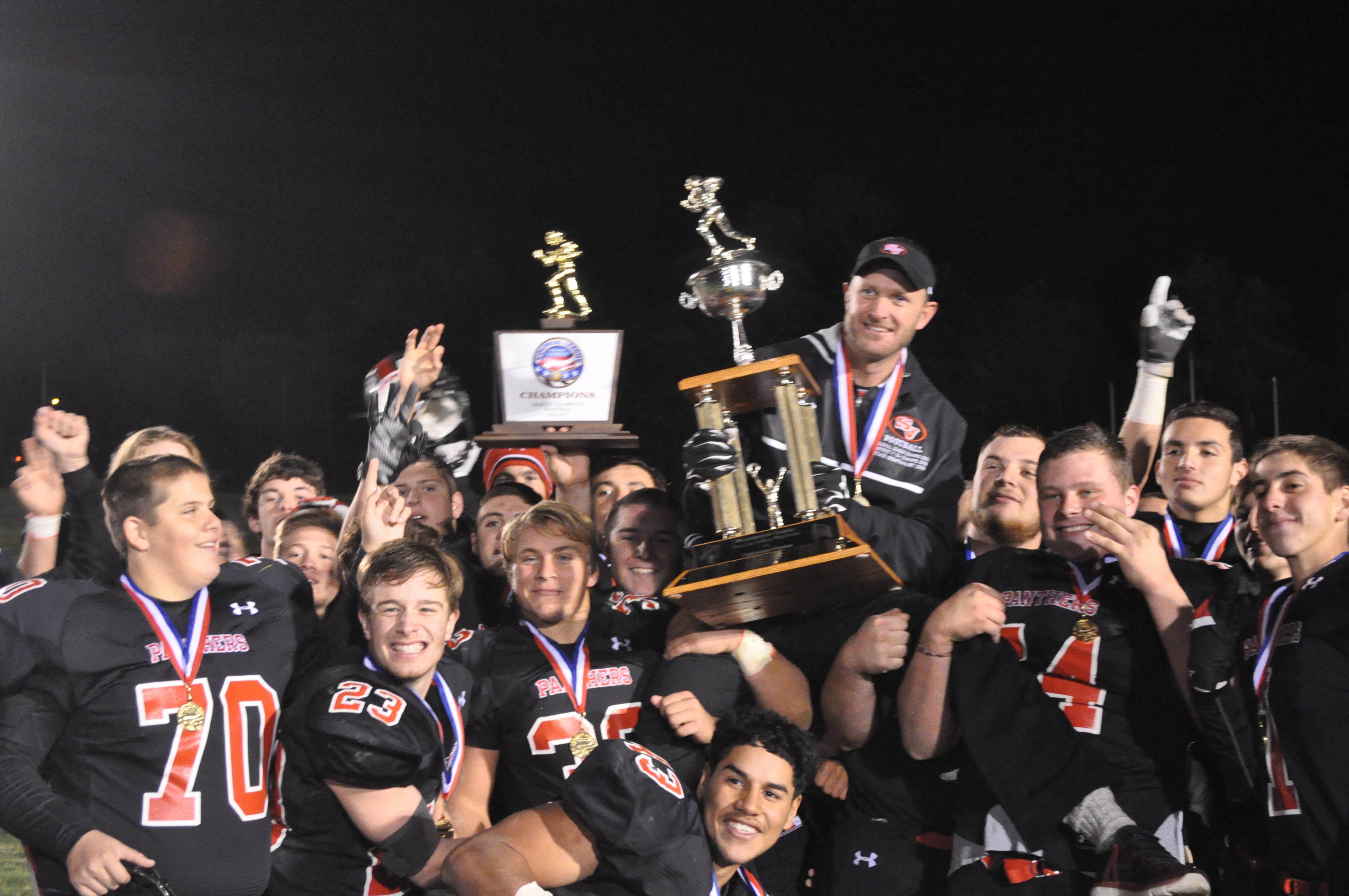 The Panthers give Head Coach Phil Sams a championship ride.

As expected it was a tight game between the Saucon Valley Panthers and the Palisades Pirates. The teams fought as they were competing for the Colonial League championship and more. Saucon Valley battled for a Colonial League three-peat and to keep the 2016 trophy all to themselves. In addition, the Panthers were determined to qualify for a spot in the upcoming PIAA 4A District XI tournament. Palisades looked to get a share of the Colonial League title as well as to secure a top spot in the PIAA 3A tourney. It ended up being a great night for Panther Nation. 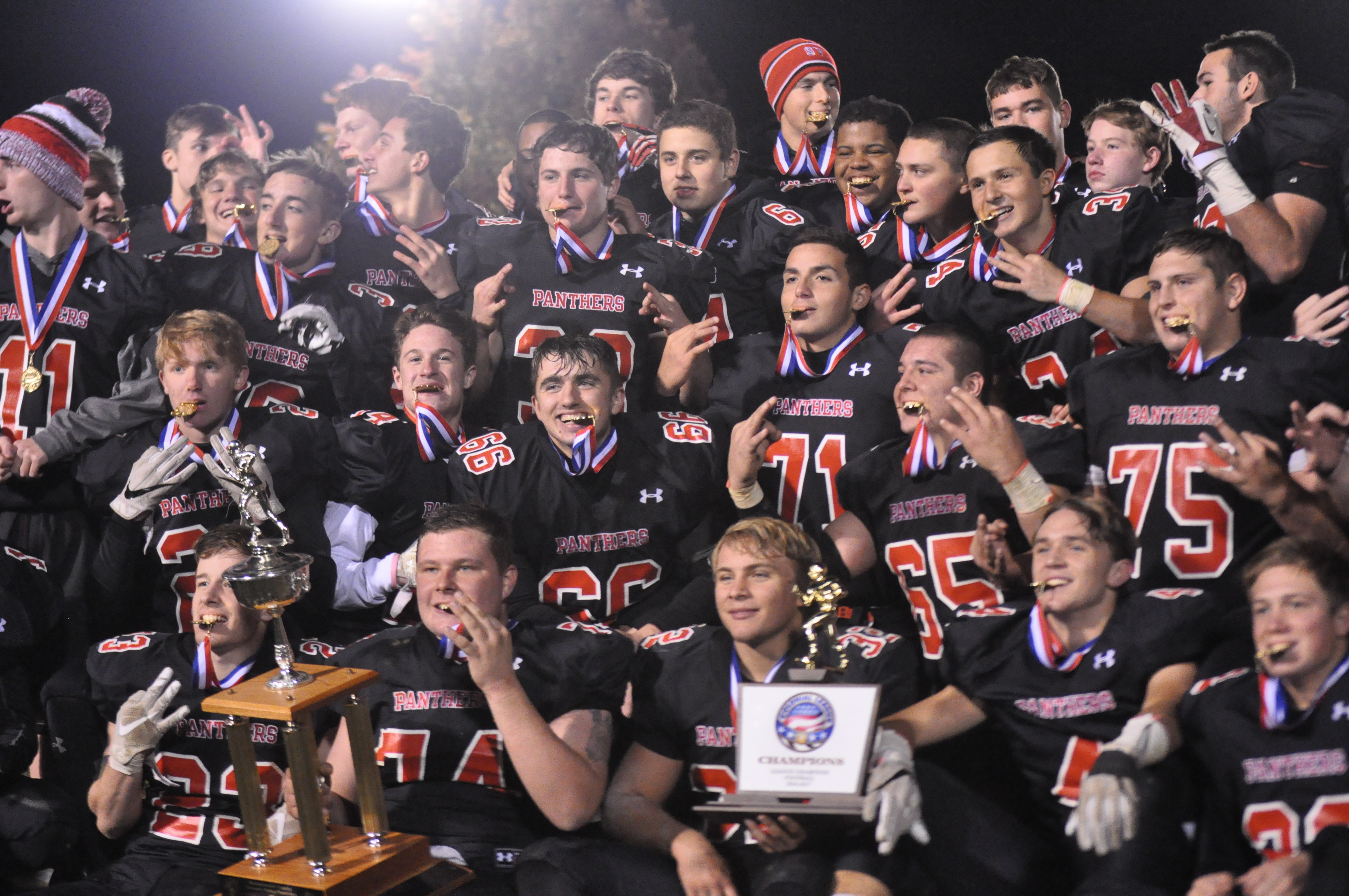 It was especially tight in the hard-hitting first quarter as the Panthers and Pirates traded punts. With 8:22 left in the 2nd Quarter the Panthers finally put points on the scoreboard. The Panthers would drive 88 yards in 19 plays for a Nate Kehs 3-yard touchdown blast. The key play was a 69 yard touchdown on a screen pass to Zach “Lightning” Petiet that was nullified by a phantom holding penalty against a great block by Drew Wagner down field. The referee who made the call reached very deep into his pocket to call that foul. Regardless, the Panthers took a 7-0 lead with Kehs’ eventual plunge and Josh Snead’s extra point. 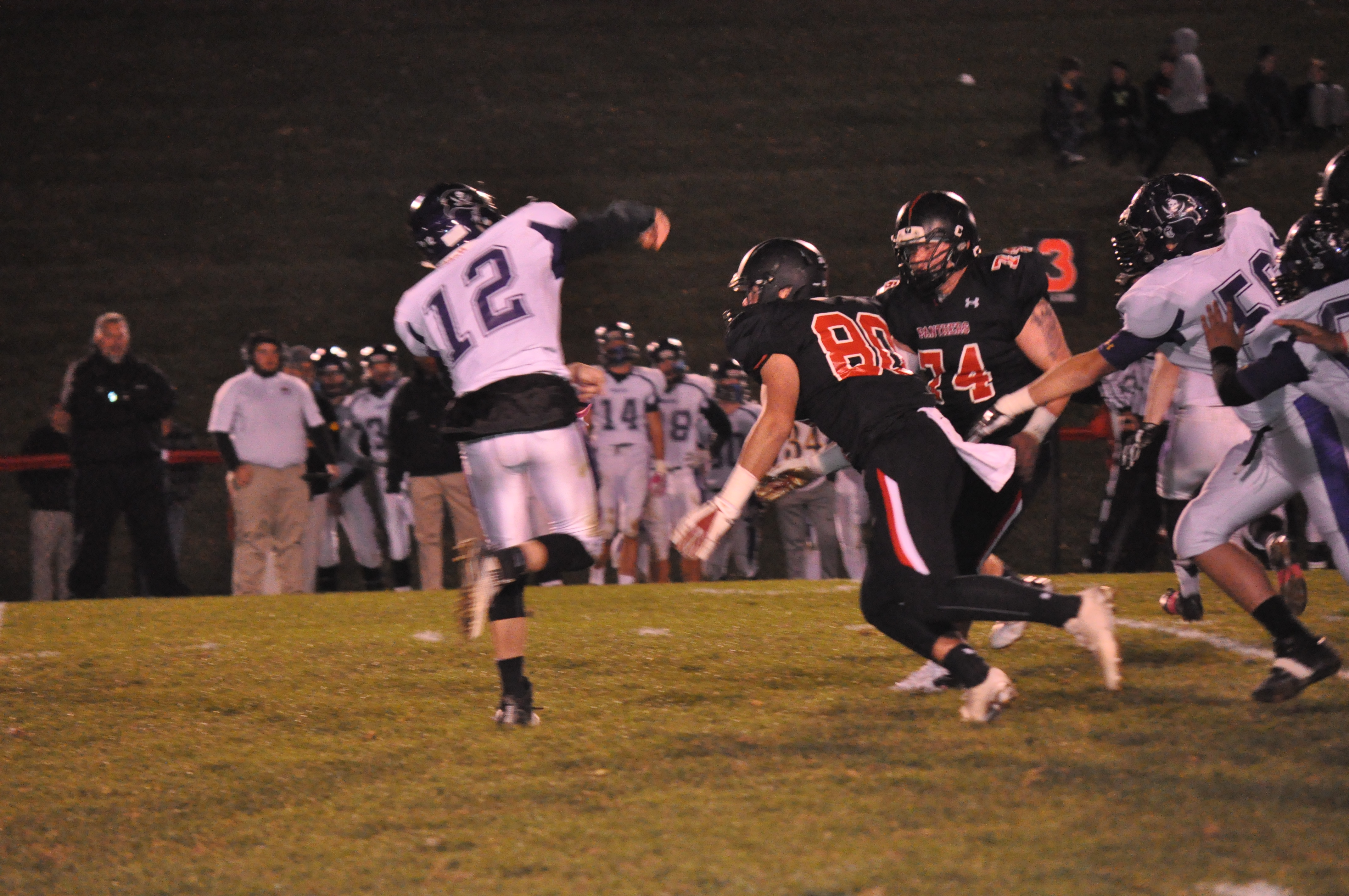 The Panthers pressured the Pirates all night long.

On the next series the tough Panther defense forced another Pirate punt and took over possession at their own 40 yard line. In only 5 plays the Panthers would find paydirt with Petiet’s 5-yard plunge up the middle. The key play of this drive was another screen pass on 3rd and 17 from midfield. It appeared to be a broken play due to the Pirate defensive end sitting on Petiet trying to sneak out of the backfield. The poise and patience of the Panthers however allowed the broken play to develop into something sweet. Quarterback Brandon Holub showed his patience and bought a few more precious seconds with his feet as Petiet alertly turned upfield away from the Pirate pressure. The disciplined Hogs avoided a potential penalty by not releasing downfield until after the ball was thrown downfield to Petiet. The Pirates finally knocked Petiet out of bounds at the five yard line. The next play “Lightning” would strike for six. With 4:46 left in the 1st Half, Snead hit the final Panther point of the night for a 14-0 lead. 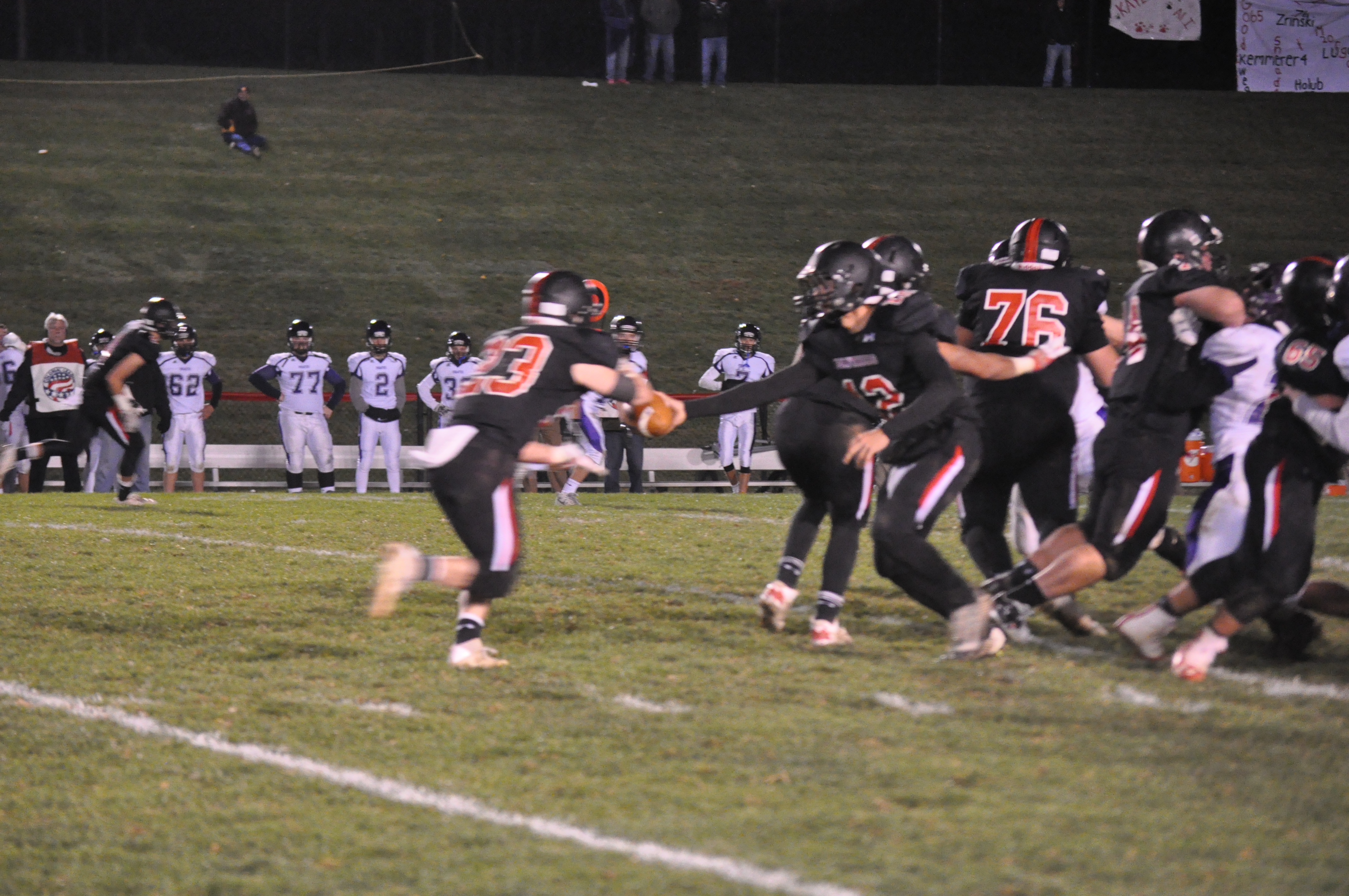 Palisades scored a touchdown near the end of the 3rd Quarter with Ethan Brader’s quarterback sneak to cut the Panther lead to 14-7. However, the Saucon Valley defense would keep the Pirates under wraps for the remainder of the game, keeping the final score at 14-7. Saucon Valley impressively held the explosive Pirates to only eight first-downs and 164 total yards of offense for the night. Nate Kehs was, for sure, from his outside linebacker position back in black, leading the Panthers defense with 8 hard-nosed tackles. 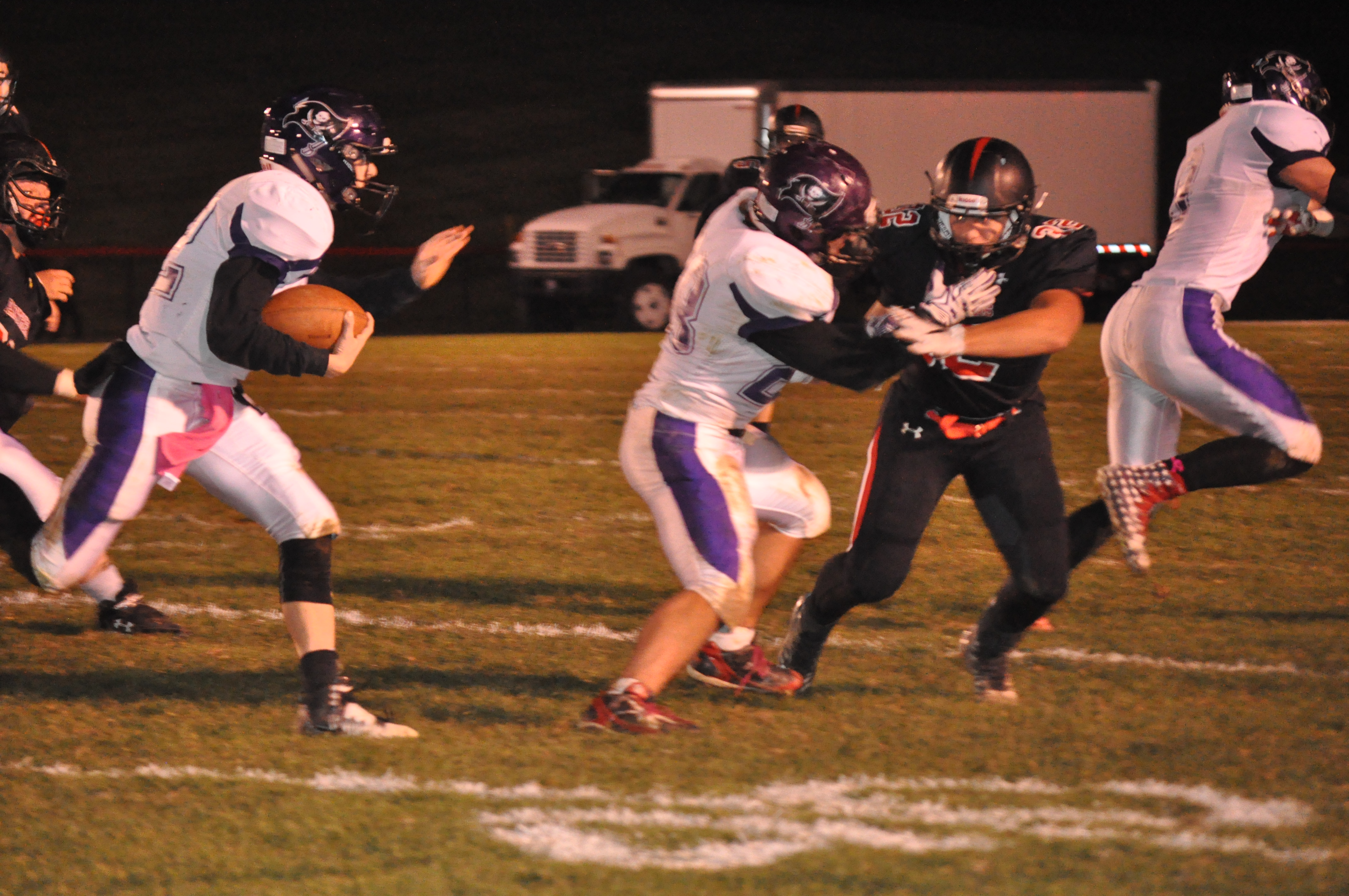 The Big Cat, Nate Kehs, is back in black, taking away the Pirates’ running room.

Offensively, the Panthers were led by Zach Petiet and Brandon Holub. Petiet had only 11 carries but rushed for 102 yards. Holub carried 10 times for 44 yards. Holub was also efficient passing, going 4 of 8 for 84 yards.

Now, the next season begins. The Panthers secured the #3 seed in the PIAA District XI tournament. This will pit them against the Pottsville Crimson Tide Friday night at Pottsville for a 7 p.m. kickoff.

Congrats and good luck, Panthers! The Source is with you! 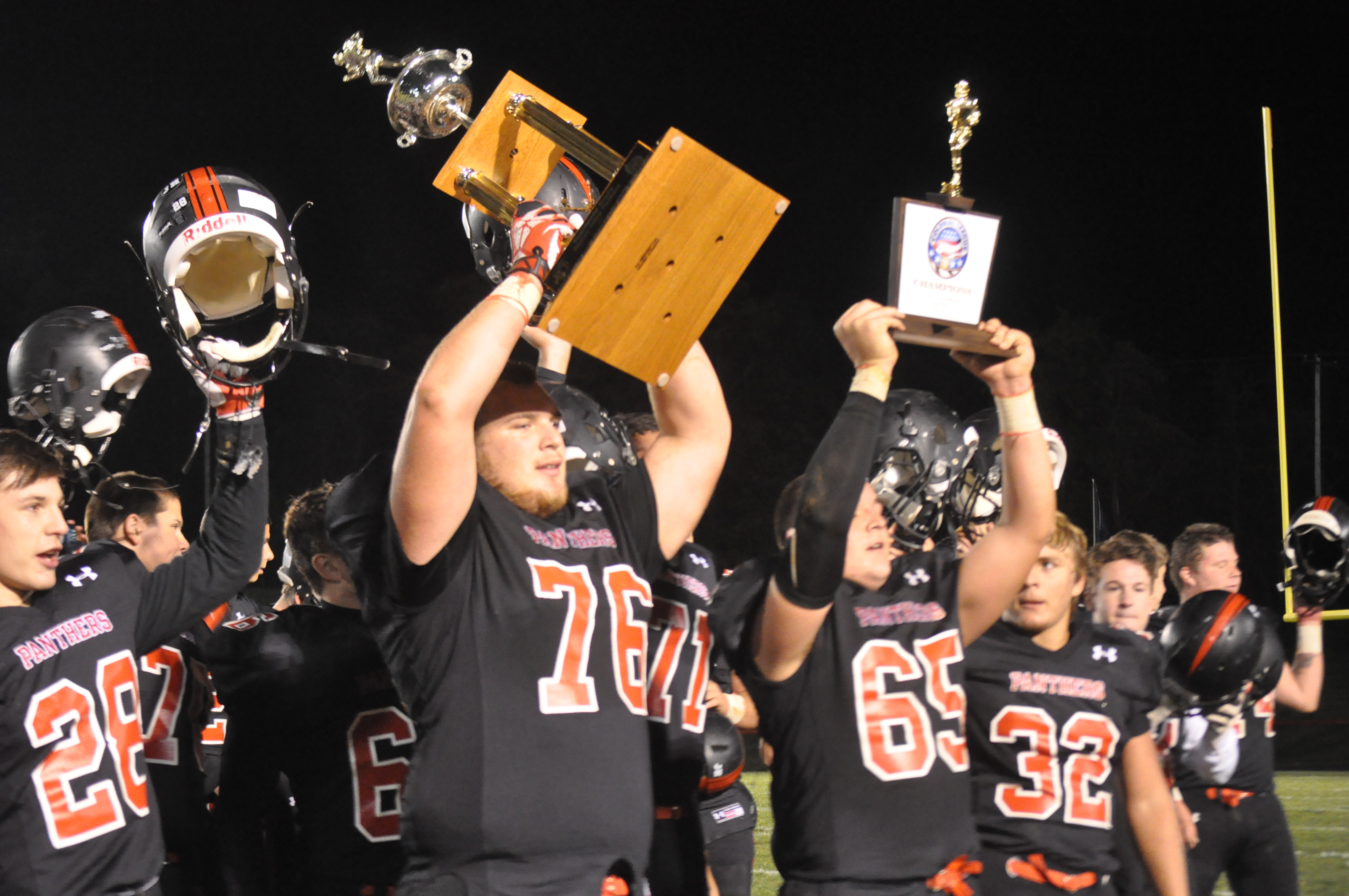