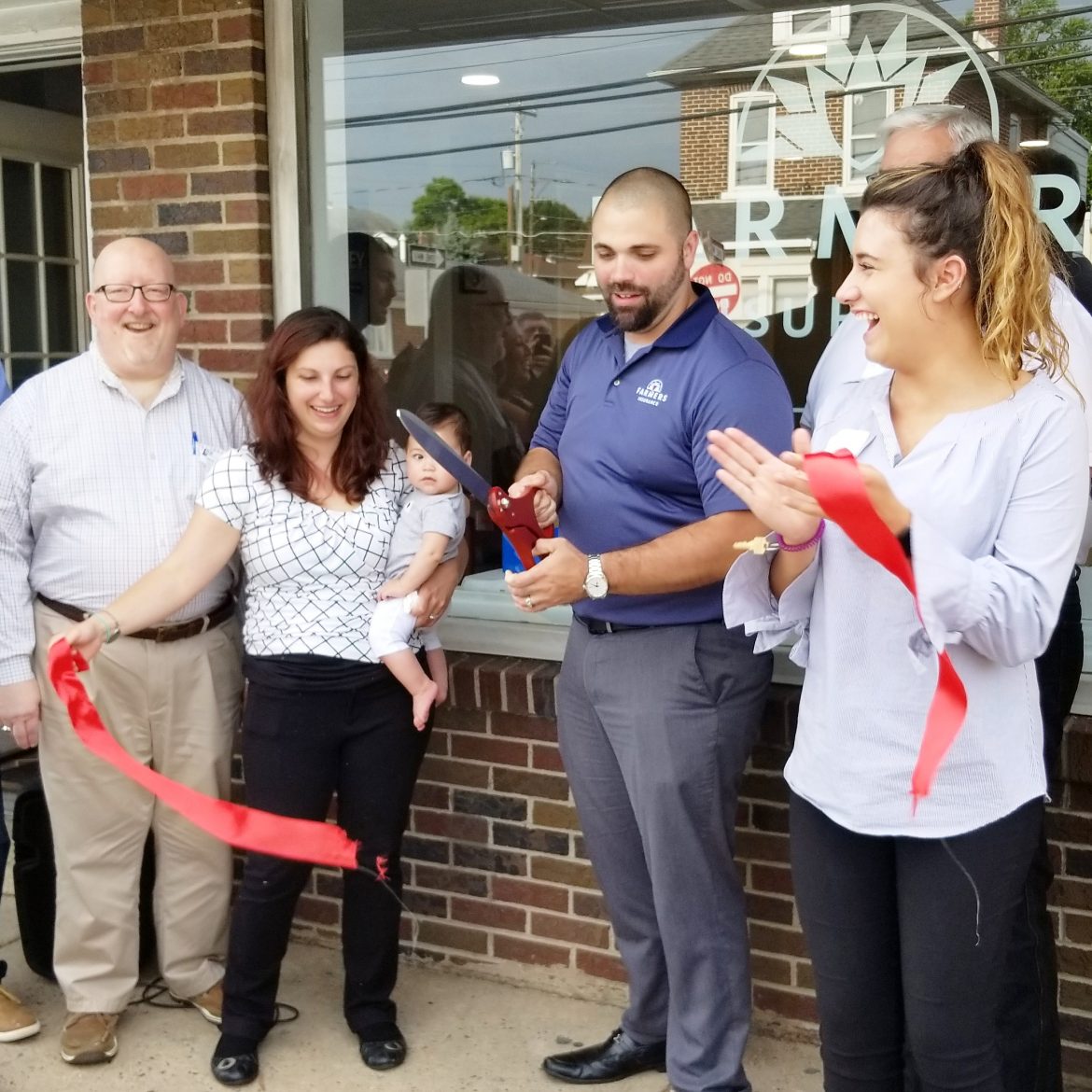 The ribbon is cut! 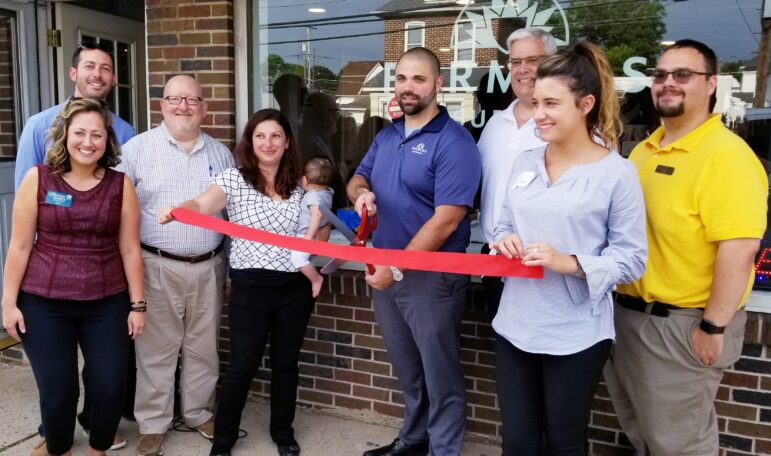 A new insurance agency in Hellertown celebrated the opening of its office that is conveniently located on Main Street with a June 13 ribbon-cutting ceremony and open house organized by the Hellertown-Lower Saucon Chamber of Commerce and attended by Mayor David Heintzelman and other local officials including borough council president Tom Rieger.

Farmers Insurance Wimbish Agency owner Brandon Wimbish opened the office earlier this year, and said he has found the Hellertown community to be warm and welcoming.

“Ribbon-cuttings in my mind signify growth, progress and success, so Brandon we certainly congratulate you for choosing Hellertown to open your office,” said chair of the Hellertown-Lower Saucon Chamber Board of Directors Ricky Gower, of BB&T. “We wish you nothing but the best. You have our full support.”

“Brandon, I welcome you to Hellertown. Hellertown is a great place to start a business…and we wish you many, many years of success,” Heintzelman said. 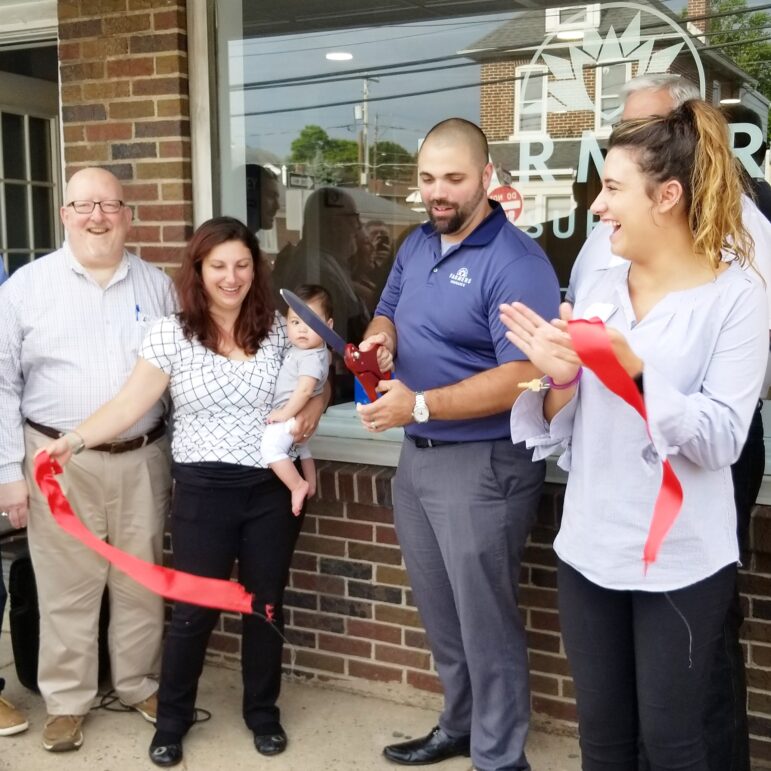 The ribbon is cut!

He also thanked Wimbish for agreeing to be one of the first announced sponsors for the 2018 Saucon Valley Spirit Parade, which will be held in October.

“Thank you all for coming out. Thank you for welcoming me to the community. We’re going to have a lot of fun here and hopefully I can help all of you out,” Wimbish said before cutting the ribbon outside his office at 1222 Main Street, in a building that was recently renovated and now sports an attractive dark brown metal awning.

Catering for the event was provided by Bella’s Ristorante and a large sheet cake was created by Hellertown Bakery. 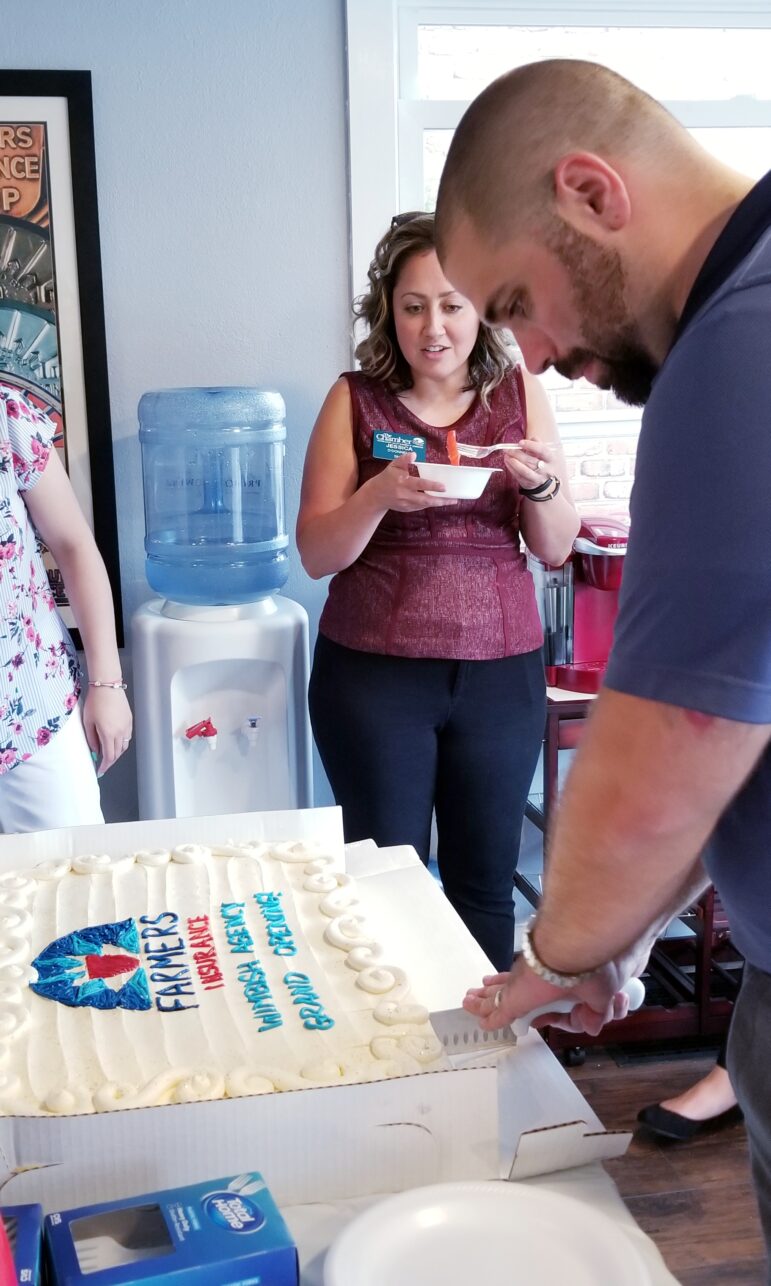 Brandon Wimbish cuts a cake from Hellertown Bakery as Jessica O’Donnell of the Greater Lehigh Valley Chamber of Commerce looks on. 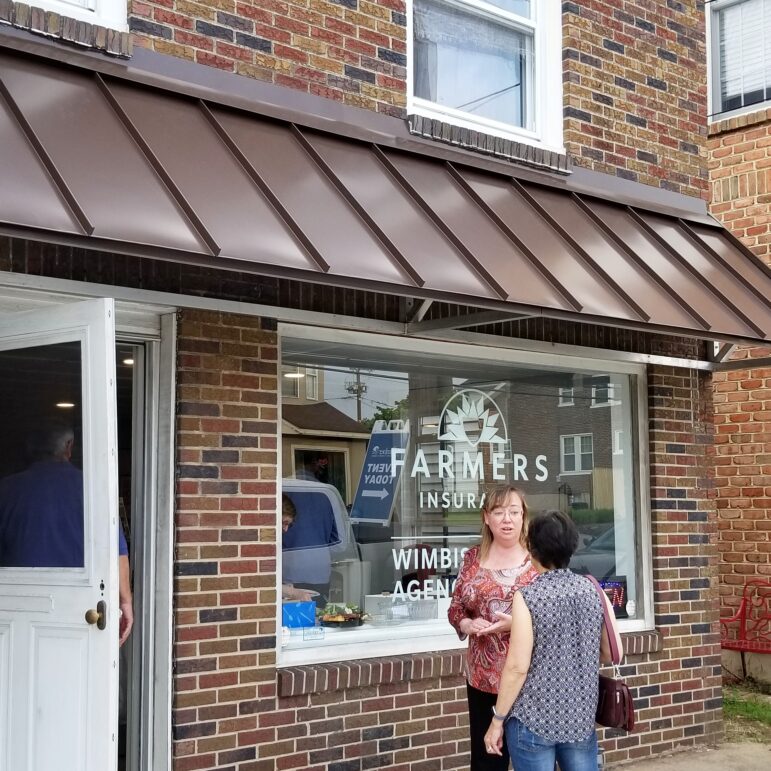 The Main Street building that now houses Farmers Insurance Wimbish Agency has been renovated inside and out. Recently a brown metal awning was installed. 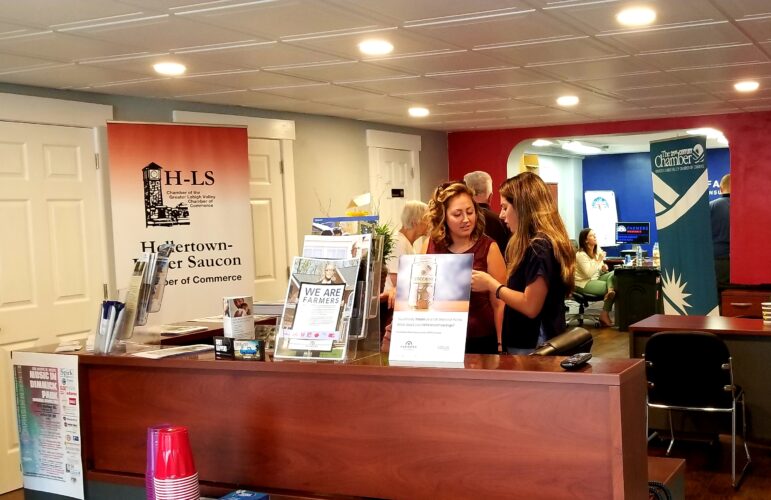 Inside Farmers Insurance Wimbish Agency the atmosphere was festive for the open house held June 13. 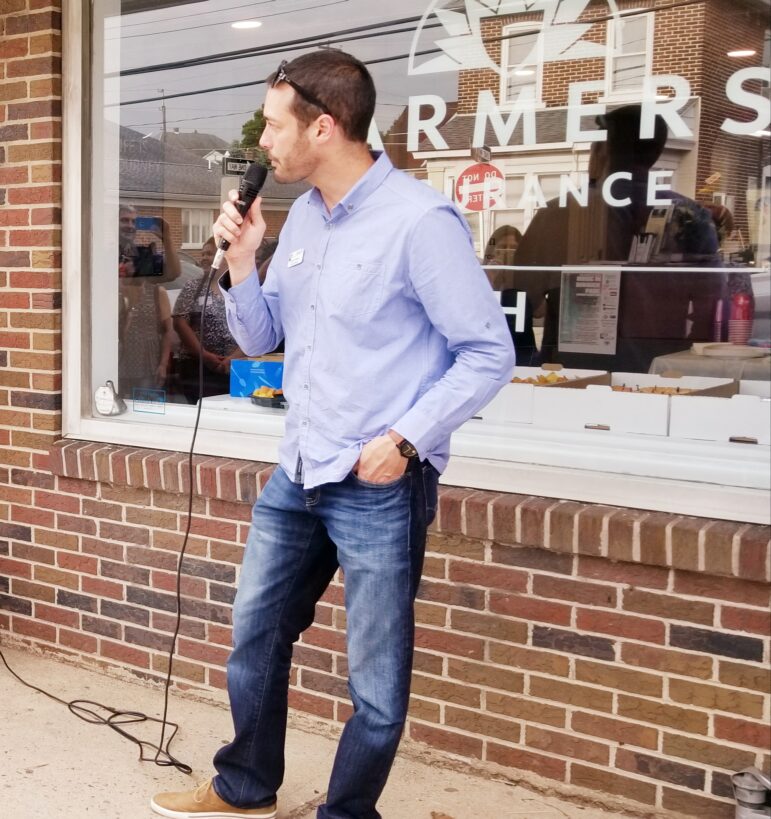 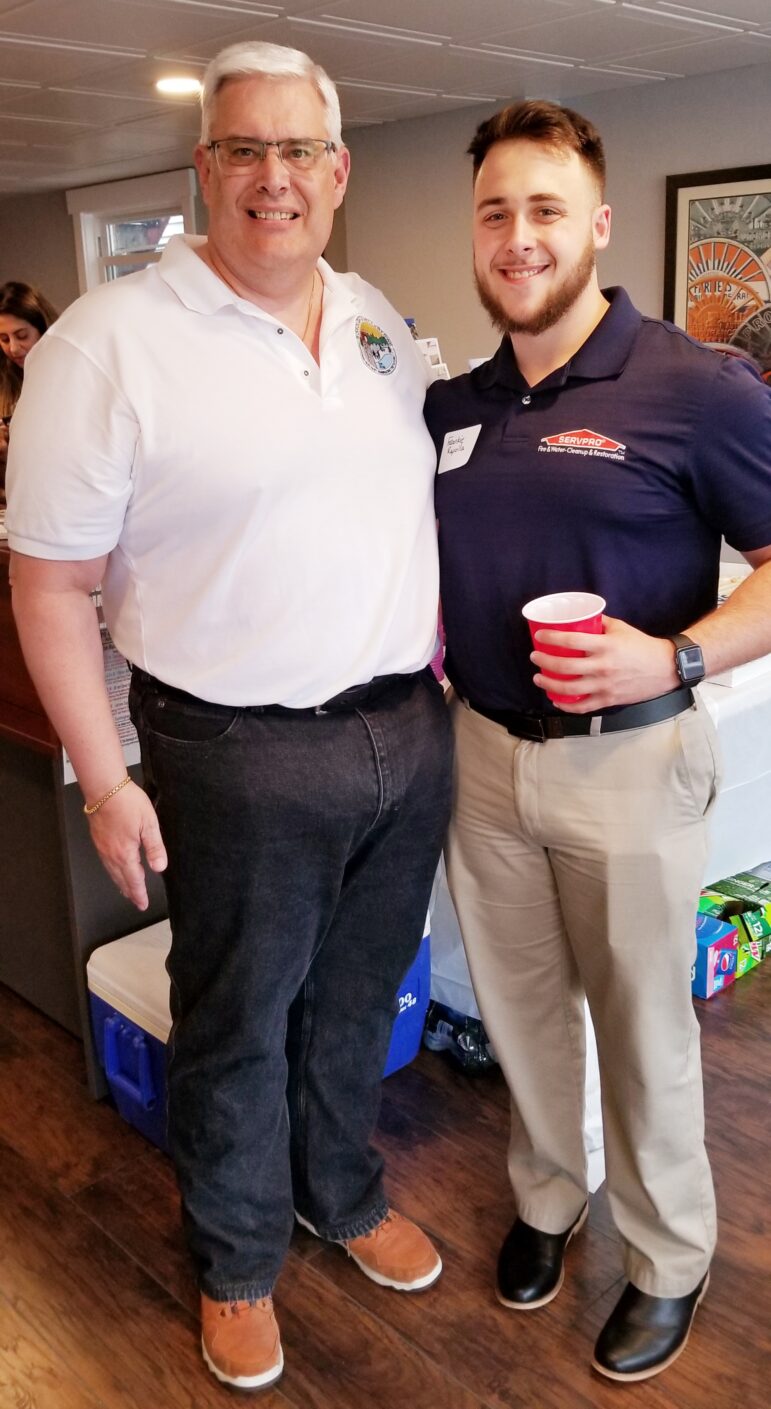 Hellertown Mayor David Heintzelman and Frankie Rapolla of Servpro of Easton, Bethlehem & Whitehall were attendees at the event.