The threat of a major hurricane affecting parts of the East Coast including possibly Pennsylvania and New Jersey by next weekend is growing, according to meteorologists.

In a hazardous weather outlook issued Saturday afternoon, the National Weather Service stated that the latest forecast track from the National Hurricane Center brings Florence into the western mid-Atlantic area by Wednesday night.

“That said, the risk for impacts along the East Coast has increased,” the NWS said.

However, the National Weather Service also noted that “the uncertainty with the model guidance this far out makes it difficult to determine the exact location, magnitude and timing of these impacts our region will have, if any.”

“Continue to monitor the forecasts from the NHC on the track of Florence and begin thinking of possible preparations in case our area does have an impact from the storm,” they advised. 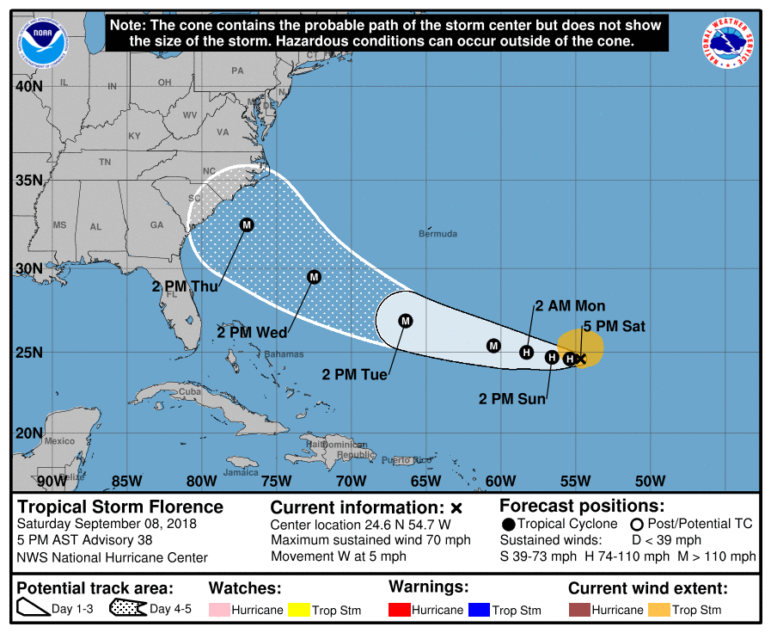 This NOAA forecast map shows a ‘cone of possibility’ for Hurricane Florence for the next five days.

Pennsylvania Weather Action on Saturday published an post about the increasing threat of impacts from Florence, from the Carolinas on up the coast to the Mid-Atlantic.

“The more observations and model data we observe, the more we believe Hurricane Florence will make some kind of impact along the East Coast,” Lead Forecaster Chris Corrigan said. “Whether the hardest impacts are along the South Carolina coast or the New Jersey coast is still a question to be figured out as we move forward.”

“The National Hurricane Center has Hurricane Florence as a major hurricane off the coast of South Carolina by early Thursday morning,” Corrigan wrote. “Where it goes from there is in big question. The latest model guidance has suggested that Florence will push north once it reaches the South Carolina coast and impact North Carolina and Virginia the hardest with devastating impacts. This would allow for our area to receive remnants from Hurricane Florence with flooding rain, but not much wind.”

According to Corrigan, if Hurricane Florence is east of North Carolina on Friday morning the two likely tracks are either west or north, with either track having the potential to bring devastation and destruction to the areas within the storm’s path.

The track north “would be a devastating track for Eastern North Carolina, Eastern Virginia, Maryland, Delaware and New Jersey, while Pennsylvania would experience major impacts as well,” he said. “Hurricane force wind gusts, especially closer to the coast would be likely with this track, as well as flooding rain.”

Any heavy rain that falls due to a hurricane making landfall somewhere in the Mid-Atlantic region could cause extensive flooding, as the remnants of Hurricane Gordon are forecast to soak much of the region with inches of rain over the next several days.

The least likely scenario at this time, Corrigan said, is that the storm will make a U-turn and head back out to sea.