The Saucon Valley School District hosted a parent and community outreach meeting in the high school auditorium Wednesday evening to discuss security measures and recent safety concerns in the district.

Butler began the meeting by discussing some of the recent strategies put in place by the district, which he said he believes will provide a “significant enhancement.”

According to Butler, the Student Assistance Program, or SAP, will undergo a re-training of its members and its process to increase efficiency. SAP allows students to submit anonymous concerns regarding their fellow classmates to a board made up of teachers, counselors and school psychologists.

The high school has also implemented a new Anonymous Tip Line which is advertised on posters around the school. This, like SAP, allows students to submit anonymous concerns either through text messaging or email. 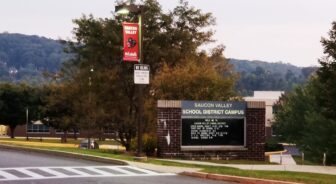 Butler also said the district has a strong relationship with the Lower Saucon Township Police Department, which is willing to work with the district on safety measures. He said officers patrol the entire campus every day and are required to walk through the high school at least once per day. Dr. Butler believes the department will offer an “optimal response” in the case of an incident.

The district also plans to conduct an upcoming self-assessment of safety protocol and procedures, which, according to Dr. Butler, was last conducted in 2008. He also mentioned the possibility of using an outside agency to conduct its own assessment of the district.

Furthermore, the district is pursuing a grant from Pennsylvania governor Tom Wolf, which Dr. Butler said could bring the district $25,000 for further improvements.

The topic of hiring a school resource officer, or SRO, has generated significant discussion from the public in the past month or so. Dr. Butler indicated that Lower Saucon police are interested in working with the district and that the idea is under discussion, but said nothing is definite at this time and the idea still needs to be discussed with “internal stakeholders.”

Business Manager and School Safety and Security Coordinator David Bonenberger also went over the ALICE program, which is a proactive approach designed to supplement lockdowns in the event of a life-threatening situation.

ALICE stands for “Alert, Lockdown, Inform, Counter and Evacuate.” These steps are not necessarily to be taken in order depending on the situation.

ALICE was developed by a police officer and elementary school principal who are husband and wife to improve safety in schools, although it can be used anywhere. ALICE is currently used in more than 4,600 schools, 3,300 police departments and 4,000 businesses. The program teaches individuals to be active participants in their own safety while leading others to safety when possible.

The district took the program to the school board in April and trained five staff members to become certified ALICE trainers in June. Recertification is required every two years. Implementation continued with the training of administrators, teachers, counselors, nurses and psychologists in August. Secretaries, paraprofessionals, cafeteria monitors, nurse’s assistants, athletic trainers and technology staff were trained in September.

The district plans to train students by grade level and other staff through December, with a drill scheduled for February. The drill will become a part of the district’s other annual drills.

After these presentations, a question-and-answer session took place as audience members voiced their concerns. One student said school shooters are often other students, and questioned whether or not they would know how to counteract the response. High school assistant principal Thomas Halcisak said distractions are the most important part of the response in that situation. Bonenberger added that the goal is “not to be easy targets” by creating noise and distractions for a shooter.

Several parents voiced their support for the hiring of a school resource officer, and one said the Lower Saucon Township Police Department is “not enough.”

Butler responded by saying,” we hear your plea,” and emphasized that the topic is being discussed.

Another audience member asked about the chance of an internal threat.

Butler pointed out the importance of various mental health services available throughout the district.

High school principal Tamara Gary brought up several new mental health clubs at the high school and the importance of creating a positive culture among students, since high school students often seek a sense of belonging by joining groups.

A parent brought up the potential for danger when students are walking to school.

Butler responded by saying the district is aware of this problem and is discussing options and alternatives.