One of the biggest events of the year in Saucon Valley is this Sunday, Oct. 21, rain or shine. The annual Saucon Valley Spirit Parade will be held in Hellertown at 2 p.m. 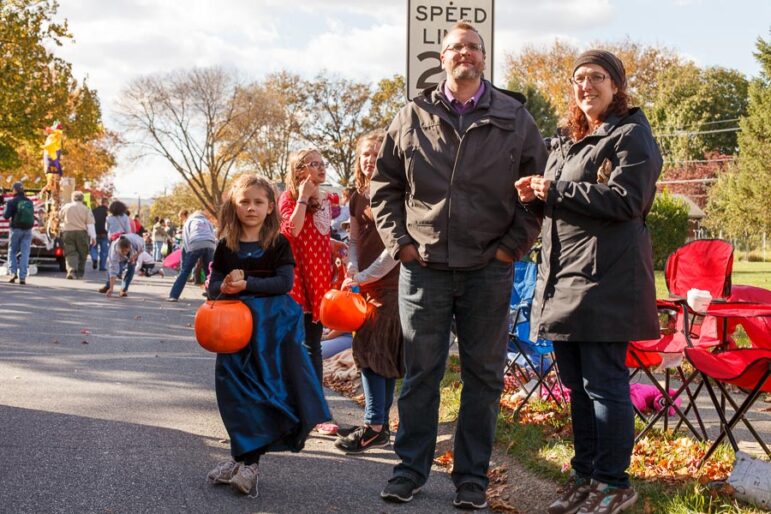 The parade route is the same as it has been in recent years, with the route beginning and ending at the Saucon Valley School District campus, where lineup will take place from 12:30 to 1:30 p.m. Parade participants should enter the campus via Polk Valley Road (turn by the McDonald’s on Main Street).

The parade route needs to be cleared of parked vehicles by 9 a.m. Sunday. 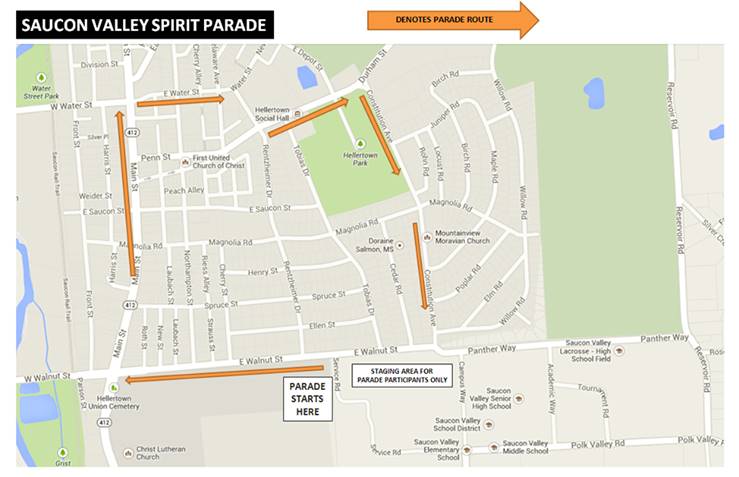 The route for the 2017 Saucon Valley Spirit Parade remains the same as it has been in recent years.

The roads on which the parade is being held will be closed to traffic and barricaded by 1:15 p.m., with the exception of Walnut Street which will be closed at Main Street at noon to help facilitate the parade’s safe staging. Motorists traveling through the borough should expect to be detoured and encounter delays before and during the parade.

This year’s parade them is “Fairy Tales” and the judges’ stand and announcer will be located next to Saucon Manor at Northampton and Water streets. The announcer will be Cheyenne Reiman and the judges this year are Diana Miller, Aubrey Herrera, Jimmy Skibo, Kelsey Kemmerer and Allie Nolf. Saucon Source will announce the names of the winners following the parade.

Service Electric Cable TV will be airing the parade on its Channel 2 and will have a staging area in the 300 block of Main Street where it will be filming.

The Grand Marshal for the 2018 parade is well-known local resident, volunteer and former Hellertown business owner Bud Prosser, who has announced the parade for many years.

Prosser is “a man who dedicated himself to Saucon Valley and its values,” Heintzelman said.

In addition to co-owning the former Prosser’s Drug Store in Hellertown for many years, he has been very supportive of Saucon Valley sports and is known for writing a column in the weekly newspaper The Valley Voice called “As I See It.”

An avid Philadelphia sports teams fan Bud has been the emcee for many charitable and recognition functions in the Saucon Valley over the years.

He is an active member of Mountainview Moravian Church, where he has served on many of its boards and activities.

“He always knew how to place humor in his delivery and get away with it,” Heintzelman said. “Please applaud him and his wife Nancy for their love of our town.”

The 2018 Saucon Valley Spirit Parade is funded thanks to generous support from many donors, who this year include:

Donations to help fund next year’s parade will be collected during this year’s parade, in which you can expect to see the following participants:

This year Saucon Source plans to broadcast the parade live on our Facebook page, so be sure to like the page to get a notification if you won’t be able to watch the parade in person or on television.

Note: Trick-or-Treat in Hellertown borough and Lower Saucon Township will be held Sunday, Oct. 28 from 3 to 5 p.m. (rain or shine). Participants are asked to leave their porch lights on.