The list of pros and cons one can write about I-78 and the effect it’s had on the Saucon Valley is long and not necessarily mutually exclusive. One thing that can’t be denied is that the highway and the exit on it–which opened nearly 30 years ago–changed life in the Hellertown area forever.

The official opening of I-78 on Tuesday, Nov. 21, 1989, was an occasion marked with pomp and circumstance, as then-governor Robert P. Casey cut the ribbon to open to traffic the highway’s long-awaited, 31-mile so-called “missing link.” That ribbon-cutting was held at a mile marker half a mile west of the Rt. 378 overpass in Upper Saucon Township, Lehigh County, according to a 1989 story from the archives of the Morning Call newspaper. For frame of reference, the Berlin Wall had fallen just 12 days earlier.

The opening ceremony was the capstone to decades of discussion, planning, engineering, and finally construction for which residents of Hellertown and surrounding areas had a front row seat.

In August 1986, the New York Times noted in an article titled “Long Sought I-78 Link to Ease Jersey Travel” that the construction of I-78 west to Phillipsburg had already “created a real-estate gold mine and a ring of nascent suburbia in the once-rural farming flatlands of Somerset and Hunterdon Counties.” The Pennsylvania border was now just 75 minutes away.

And with the opening of the final leg three years later, the real estate boom and transition from farmland to exurb extended west to the Lehigh Valley.

The Saucon Valley has no doubt experienced population growth and higher real estate values thanks to greater accessibility to the New York metropolitan area, but the road to its opening here wasn’t always smooth.

For example, before construction of the highway began in June 1984, there was debate about whether a proposed interchange at Rt. 378 in Lower Saucon Township should be built, according to a November 2009 Morning Call “Road Warrior” column about that “lost” exit.

Then-columnist Dan Hartzell speculated that multiple factors doomed the 378 interchange, although he cites contemporary newspaper reports which documented heavy opposition to it from township residents, in contrast to tacit support from a council that was considered pro-development. 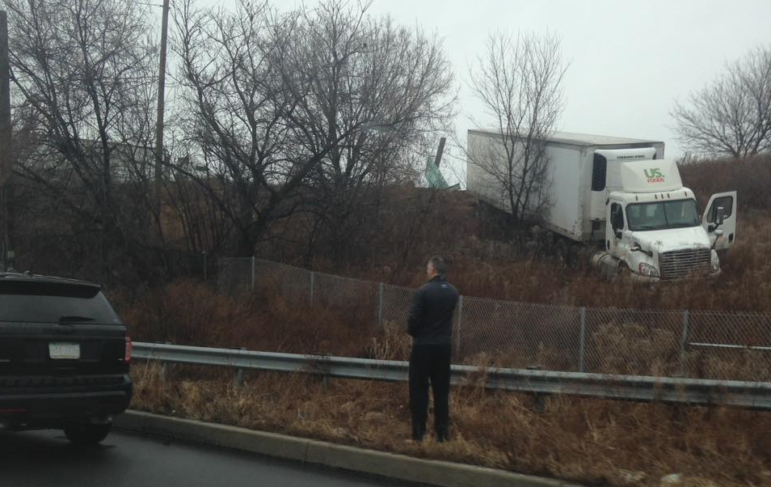 A U.S. Foods tractor-trailer went off I-78 and down an embankment at the Rt. 412 interchange on Feb. 16, 2018. The highway and the accidents that regularly occur along it directly affect Saucon Valley fire, police, EMTs and other emergency first responders, as well as their loved ones. (FILE PHOTO)

Thirty years later, the only Saucon Valley interchange is still on Rt. 412, where it straddles the border between the city of Bethlehem and the borough of Hellertown. Several local landmarks like the Champion Spark Plug factory and Vassi’s Drive-in are survivors from the pre-78 era.

Do you remember the construction of I-78 and how it affected you or your family and friends? Did you help build the highway? Did you oppose it, or a proposed route or exit as a Saucon Valley resident or business owner? Did you participate in the opening ceremonies or another event–such as the bicycle race that was held on the highway just before it opened? Did you attend the party that was held on I-78 in Hellertown in October 1989? Do you have a unique memory of the highway before or after it opened?

We want to hear your first-person accounts of this important period in local transportation history for our 30th anniversary story series to be published throughout 2019: “Three Decades of I-78: Saucon Valley Remembers.” If you have photos of the highway’s construction, opening or other significant events that have occured on it we’d love to share those as well. You will receive credit for any original photos you allow us to publish.

As part of this series, Saucon Source also wants to share unique, thoughtful perspectives on how life was different in the Hellertown area before and after I-78 opened. For example, do you remember the sidewalk sales that were once held in downtown Hellertown? Your memories will enlighten readers who weren’t alive or old enough to remember when the interstate opened, as well as residents who’ve moved to the area since then.

If you’re a longtime resident of the area who remembers how life was pre-78, we’d love to hear from you.

Please email josh@sauconsource.com with “I-78 memories” in the subject line to submit a memory, photo or for more information. When submitting a memory please provide as much detail as possible. Include your full name and phone number so we can follow up with you if necessary.