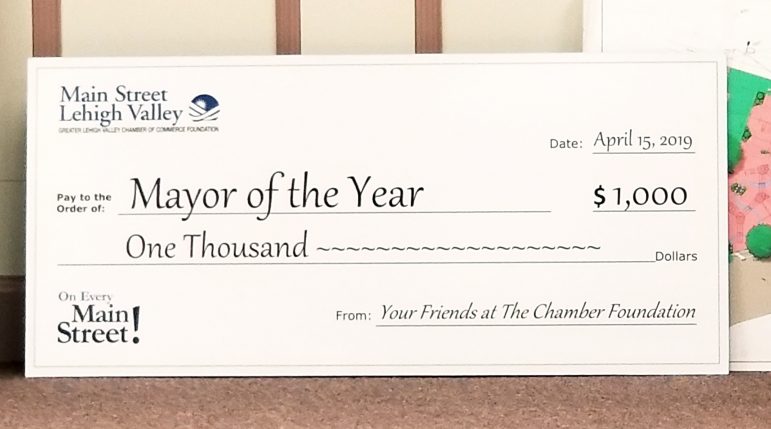 This ceremonial check from the Chamber Foundation was presented to Hellertown mayor David Heintzelman at the Greater Lehigh Valley Chamber of Commerce’s annual Mayors’ Dinner Monday. Heintzelman was named Mayor of the Year by the GLVCC.

As the Greater Lehigh Valley Chamber of Commerce’s 2019 Mayor of the Year, Hellertown mayor David Heintzelman was honored at an event that was attended by Pennsylvania governor Tom Wolf and 400 other people Monday at SteelStacks in Bethlehem.

Heintzelman was awarded $1,000 in the form of a ceremonial check from the Chamber Foundation; money which has to be used for “a good cause,” a chamber representative said.

On Tuesday, the large check was displayed and Heintzelman was congratulated at a Hellertown Borough Council meeting where he also announced that he will donate the gift to help fund construction of a new public works building that’s proposed for the site of the former Reinhard School, despite the fact that a plan has not yet been approved.

Heintzelman also shared his thoughts about a public meeting about the proposal that was held at Borough Hall April 8, which several dozen residents attended. 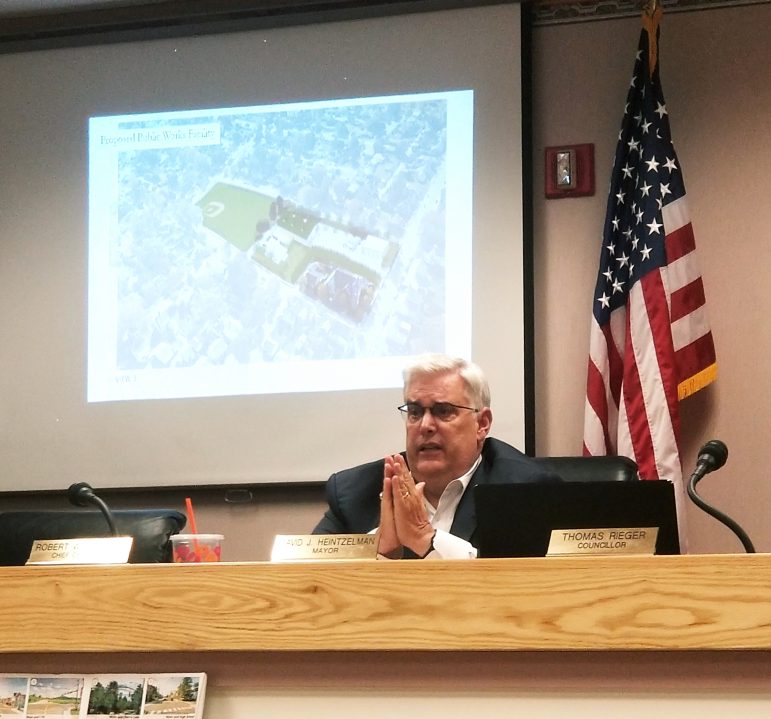 The majority of residents in attendance at the meeting said they favor the location between Magnolia Road, Northampton Street and E. Saucon Street.

A small but vocal minority of residents argued that building in that location would jeopardize the safety of children in the area, that the land is needed as recreational space and that the building would devalue their properties.

“I believe it was established very strongly that we need a public works building,” Heintzelman said Tuesday. “We also established that this issue has been going on too long and needs action now.”

The borough has sought and is continuing to seek grant funding to cover the cost of erecting a new facility for public works, which has been using an antiquated structure that no longer suits the borough’s needs, officials say.

Other sites besides the Reinhard field have been considered, but council members have said that primarily due to their cost, all but the Reinhard site have been deemed unacceptable.

“For being fiscally responsible, I believe there is only one choice,” Heintzelman said, referring to the Reinhard site.

Ultimately it is council who will decide where a new building should be built, if funding is secured, and Heintzelman said the public should have faith in it to make wise decisions, with public input weighed as part of the process.

“As a citizen, our tremendous council is listening,” he said. “That’s what makes a good council.”

The idea of hosting a second public meeting about the proposal to build a public works building on Reinhard field was briefly discussed at Tuesday’s meeting. The idea to hold it during the second week of June was brought up.

The next regular Hellertown Borough Council meeting will be held Monday, May 6 at 7 p.m. at Borough Hall.

Editor’s Note: This story has been updated to clarify that the safety of children in the area is the opposition group’s primary concern. “Our main concern, and we’re very consistent about this, is safety,” said member Bill Broun. “The neighborhood swarms with little children. Our neighborhood group has several times articulated that safety is the main issue for us.” An additional clarification to the story concerns the proposal. No plan for a public works building has been approved by Hellertown Borough Council.