If you see emergency vehicles and what appears to be a wreck outside Saucon Valley High School Tuesday afternoon, administrators don’t want you to be alarmed. The vehicles and the first responders who operate them will be there for a good reason.

From 12:45 to 2 p.m. Tuesday, Saucon Valley students, staff and first responders will be participating in an educational program designed to raise awareness among students about the very real dangers of distracted driving and driving under the influence.

According to SADD (Students Against Destructive Decisions), “alcohol-related fatality rates are nearly twice as high for 18-, 19-, and 20-year-olds as for those over age 21.”

“Young drivers are less likely than adults are to drive after drinking alcohol, but when they do, their crash risks are substantially higher,” according to statistics about impaired driving on SADD.org. “This risk is especially true at low and moderate blood alcohol concentrations and is thought to result from teens’ relative inexperience as new drivers.” 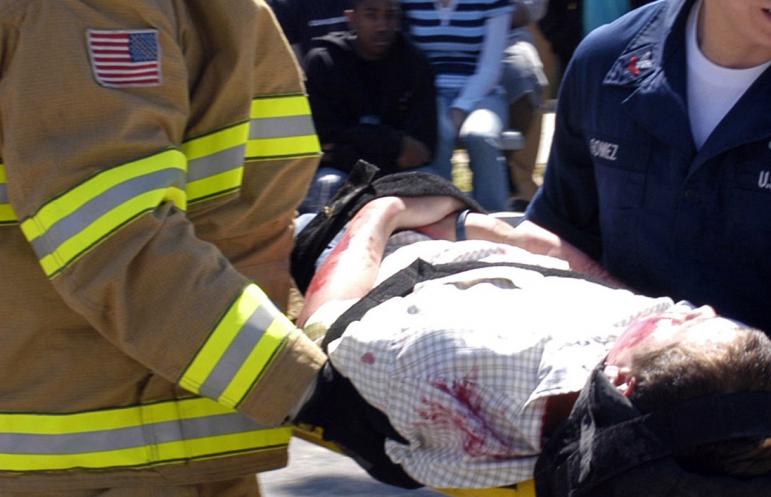 An actor participates in a mock crash.

The statistics for distracted teen driving are also sobering.

A 2009 National Highway and Transportation Safety Administration (NHTSA) report concluded that the age group with the greatest proportion of distracted drivers is the under-20 age group, with 16 percent of all drivers younger than 20 who were involved in fatal crashes reported to have been distracted while driving.

This is one of the reasons why the National Transportation Safety Board (NTSB) recommends that new drivers have passenger restrictions on their drivers licenses.

The first part of Saucon Valley’s two-day program will involve a staged motor vehicle accident at the school in which emergency vehicles will be involved, athletic director and student advisor Bob Frey said.

The second part of the program will be held Wednesday morning in the high school auditorium.

Look for coverage of this important educational simulation on Saucon Source after it is held.