The man killed in an accident involving a school bus that occurred near Rt. 412 and Silvex Road in Bethlehem Monday has been identified by the Lehigh County Coroner’s office.

In an article published by Lehigh Valley Live Tuesday afternoon, it was reported that John Mroshinskie, 65, of Bethlehem, died of blunt force abdominal injuries suffered in the crash and was pronounced dead at St. Luke’s University Hospital in Fountain Hill at 4:30 p.m.

The school bus was not carrying any students at the time of the accident. 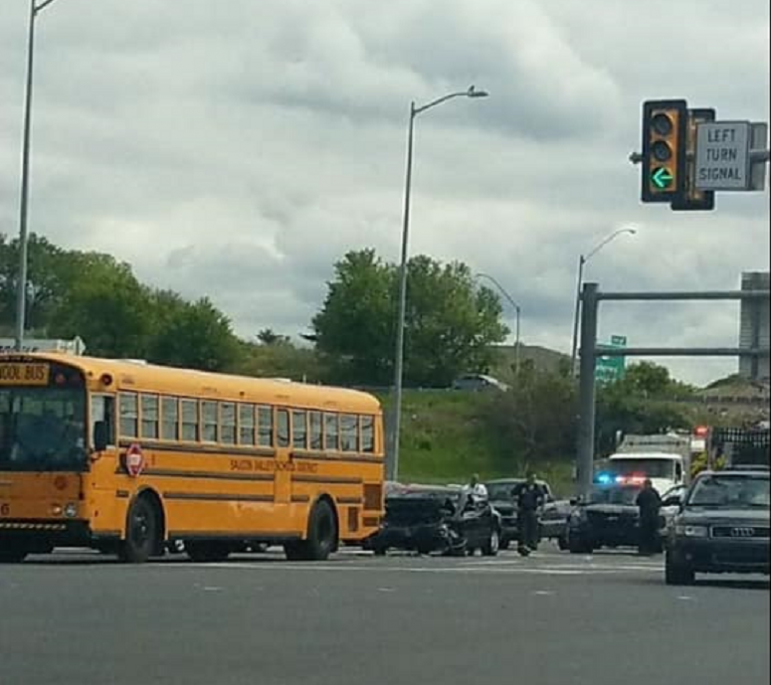 This photo of the accident scene taken by an eyewitness showd the Saucon Valley school bus in the northbound lane on Rt. 412 (Hellertown Road) in Bethlehem with the wrecked vehicle behind it and police on the scene. Police have not yet released any information about how the crash occurred.

An earlier story published by Lehigh Valley Live which cited police sources incorrectly indicated that the victim was 53 years old. The news site also reported earlier that the crash happened around 1 p.m., however it has since been reported that it happened around 2 p.m.

The crash remains under investigation, and police are asking anyone with information about it to call Ofc. Jeffrey Fehr with the Bethlehem Police Department’s Major Accident Reconstruction Team at 610-865-7180.

Several Saucon Source readers who observed the accident scene firsthand said the vehicle Mroshinskie was apparently driving appeared to have struck the back of the school bus.

An eyewitness reported that the bus was a Saucon Valley School District bus.

Superintendent Dr. Craig Butler confirmed that it was a Saucon Valley bus in an email Wednesday.

“I believe our driver was unharmed,” he said.

Butler added that he thought “there was damage done to the back of the bus.”