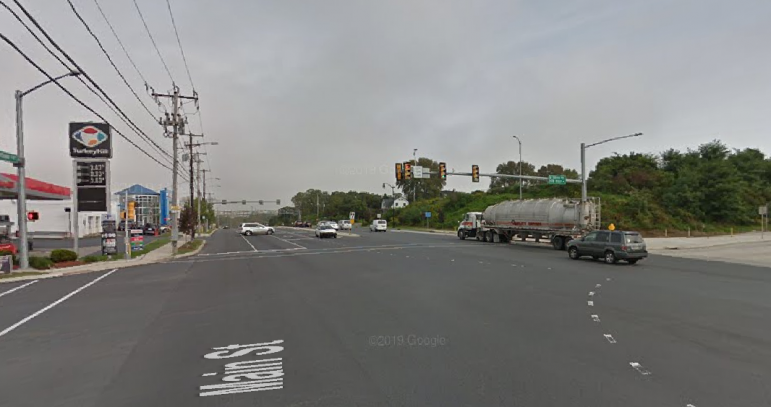 The intersection of Silvex Road, Rt. 412 (Hellertown Road) and Interstate 78 in Bethlehem was the scene of a fatal crash Monday afternon, according to authorities who are now seeking witnesses to it.

Bethlehem police are seeking witnesses to a crash involving a school bus that claimed the life of a 53-year-old man Monday afternoon.

According to a story published by Lehigh Valley Live Tuesday, the man was in a vehicle that collided with the bus–which was not transporting students at the time–at the intersection of Rt. 412 (also known as Hellertown Road) and Silvex Road at around 1 p.m.

The I-78 westbound on- and off-ramps also intersect with Rt. 412 at that intersection, which is adjacent to several businesses, including Wendy’s and Turkey Hill.

Part of the intersection is in the City of Bethlehem and part is in Hellertown borough.

It was not immediately clear to whom the school bus involved in the crash belongs.

As of this morning Northampton County Coroner Zachary Lysek had not yet released the name of the man who was killed in the crash, Lehigh Valley Live reported.